Is This a Dystopian Satire? No, it’s Daily Life Down Under 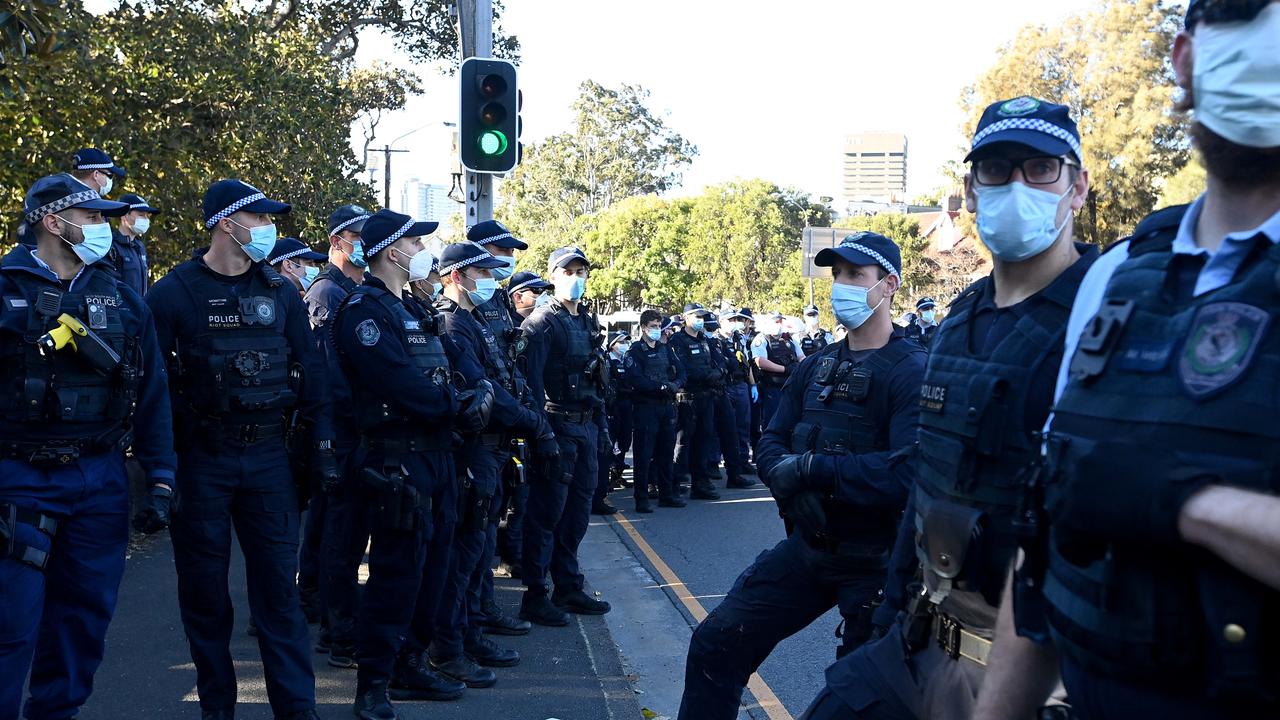 Steve Waterson, the Commercial Editor of the Australian, has kindly given us permission to reprint his latest column. It’s another jeremiad against Australia’s staggeringly incompetent ruling class, as they frantically try and spin their mismanagement of the coronavirus crisis as a mature, statesmanlike response. Meanwhile, the regulations that ordinary Australians have to cope with grow ever more ridiculous. Sit down to drink, but stand up near a park bench; exercise, but don’t rest; go shopping but don’t browse; under no circumstances talk to anyone you know, despite the masks that afford magic protection from nanometre Covid dust… “The list is a never-ending carousel of hilarity,” says Waterson.

Well, that was worth waiting for. Finally a tiny glimpse of the modelling that has underpinned government decision-making on our Covid response, and very convincing it is too. And unbelievably, literally unbelievably, precise.

Let’s not go through the various conditional predictions of the virus’s impact, especially the “worst-case” scenario, which happily generates a number far short of “everybody dies”, which I would regard as the worst case.

Instead here’s what the Doherty Institute says could happen if we suffered a six-month uncontrolled outbreak with only 60% of the population vaccinated: there would be 737,971 infections and 5,294 deaths. Note the super-scientific accuracy: not 737,970 or 737,972 infections; why, that would just be sloppy guesswork.

I’m teasing, of course (it’s one of the few pleasures not yet forbidden in these joyless times), and have no doubt the statisticians are doing their very best with the data; so let’s assume they’re correct that almost three-quarters of a million would be infected, of whom 5,000 would die.

Many of us in the anti-lockdown corner are asked how many lives we would sacrifice to see the country open up again, our accusers triumphantly certain there is no decent answer because, as the NSW Premier told us in May, “no death is acceptable”.

She and her interstate counterparts would rather smash our lives and livelihoods in pursuit of their ridiculous, hubristic ambition.

If a foreign power were causing damage on this scale we would regard it as an act of war, when deaths in defence of the country would become acceptable again.

Perhaps we should bite the bullet and say 5,000 predominantly old people taken prematurely is a sad but tolerable price to pay for the restoration of our freedoms and the repair of our society – as long as it’s not my precious grandparents. Oh wait, mine have already died of old age, like all my ancestors since humans first wandered out of the African Rift Valley. It happens a lot, I understand. And by the way, those 5,000 projected deaths assume we could find no other way of protecting the vulnerable, which is hard to believe.

The Prime Minister’s proud boast is that our closed borders and hyper vigilance have “saved 30,000 lives” since the start of the epidemic last year. More unverifiable modelling; but again, let’s assume he’s right. I wonder how many of the saved have succumbed to other ailments in that time; or will next week’s census reveal a Cocoon-like bubble of healthy nonagenarians, 30,000 strong, laughing at Covid and death in all its other guises?

At best, we’ve dragged their lives out for a few more lonely months sequestered from their families, just as we’ve kicked the whole pandemic a little way down the road, at an almost inconceivable cost. As our leaders and their worker bees finesse their incarceration strategy, in the background the cries of misery grow louder.

The politicians look on, stern-faced and witless, bleating their platitudes about feeling our pain, and urging us to get vaccinated as the only way to escape the shackles on our lives, as though they had nothing to do with the sinister emergency powers they have granted themselves and aimed against us. “A surge in cases has closed restaurants”; “the latest outbreak means tradesmen can’t go to work”; “thanks to some selfish cab driver we must stay at home for the next month”.

No, ladies and gentlemen, the virus hasn’t done this to us; you have, cosy in your luxurious offices with your index-linked financial cushions, surrounded by sycophants and shoving people around like demented puppetmasters.

It may come as a shock to those snorting and gobbling at the trough of public money, but not everyone makes their living by opening a spreadsheet on a laptop, reaching out to a stakeholder and unmuting themselves on a Zoom call.

There are people who pay taxes (rather than recycle them) by travelling every day to places where they make actual things with their hands, who build home offices rather than work from them.

Some then have the audacity to consider their manual or menial work essential, as though they are under some obligation to put food on the table for their families.

And these ungrateful wretches, instead of praising the wisdom of their superiors who imprison them in their unfashionable suburbs, have the nerve to march in the streets in complaint, thousands of people engaged in reckless superspreader events that have led to a massive zero new infections.

“How sharper than a serpent’s tooth it is to have a thankless child!” wails Shakespeare’s King Lear. Echoing him, our politicians and bureaucrats, parents to their infantilised population, are “disgusted” (NSW Premier Gladys Berejiklian) with these “filthy” (NSW Deputy Police Commissioner Gary Worboys) “boofheads” (NSW Police Minister David Elliot), “wankers” (NT Chief Minister Michael Gunner) and “hooligans, dropkicks” (WA Premier Mark McGowan). Treasure the eloquent, statesmanlike rhetoric of these latter-day Ciceros; that’s the way to bring the people along with you in difficult times.

Instead they govern by regulations that grow daily more ridiculous. Sit down to drink, but stand up near a park bench; exercise, but don’t rest; go shopping but don’t browse, even though the sadists at Coles have moved everything you wanted into different aisles; under no circumstances talk to anyone you know, despite the masks that afford magic protection from nanometre Covid dust; the list is a never-ending carousel of hilarity.

The latest inanity from the future governor of Queensland (remember her, the one who did more than anyone else to dissuade people from receiving the AstraZeneca vaccine?) is to warn against online shopping.

“Do you need those people out in the community delivering packages and things?” she asks. No, your excellency, of course not, let them park their vans and bikes and get a well-paid, non-executive board position like your pals do.

What begins as absurdity soon turns dark. In NSW you must carry evidence of your address at all times when outside your home, and produce it to a police officer – “Papers please!” – on demand. You must carry a mask on your person, even to walk the dog around the block. Cold War Berlin-style police checkpoints have appeared on our streets to confirm cars are within 10km of their homes, and their occupants not intending to protest against their rulers. The army is on patrol in areas whose citizens are often refugees from regimes where camouflage battle-dress is rarely a welcome sight.

Do Western concepts of freedom no longer matter in Australia? Is it a trivial matter that we are commanded not to leave our homes? Does it seriously not bother anyone in office that we are being compared – accurately – to North Korea in our legislated refusal to allow our citizens to leave the country, or overseas Australians to return? This is very bad company we find ourselves in.

The politicians say they’re faced with tough decisions, but they’re not making decisions at all. They defend their abdication of responsibility by loftily declaring they are acting on the health advice they receive. They don’t evaluate that advice, mind, they simply follow it.

And it leads always to the same destination: lockdown. It’s “horrible”, Berejiklian said this week, “but we know we have no option”. In Victoria, Premier Daniel Andrews parrots her: “There are no alternatives to lockdown,” he said on Thursday. Unless of course you don’t order a lockdown, which I think does qualify as an option, and a much more appealing one.

Lockdowns certainly work in the crudest sense, in that by isolating people you limit viral transmission, but that’s not the point.

It’s the cost-benefit analysis that’s missing, absent from the moment our governments panicked and abandoned our sensible national pandemic plan to follow the brutes of Communist China into a policy of dystopian oppression, to “keep us safe”.

Let’s turn the acceptable casualty question around and direct it to our leaders: how many fruitful young lives are you happy to waste to keep those Covid numbers low?

How many small businesses are you ready to see disappear? How many suicides will you tolerate? How many bankruptcies? How many children should forgo their formative primary education and socialisation? How many deaths from other untreated illness are acceptable to you?

How much sorrow are you willing to impose on your subjects? How many grief-stricken families must bury parents and children without ceremony, like backyard pets? How many tears will soften your stony, self-righteous hearts?

Whether born of stupidity or callousness, the effect of our current aimless course is the same. State against state, city against country, suburb against suburb, office worker against tradesman, old against young, vaccinated against unvaccinated: it is a heartless, divisive and dehumanising policy. And worse, it doesn’t work.

The very people we elect to safeguard our freedoms are shredding them, causing fractures in society that may never be healed.

Surely there are politicians in every party who are silently appalled by this mounting despair and devastation. If their leaders cannot find a path out of this madness, perhaps those others should speak up and think about taking the reins, before the electorate’s frustration turns to fury.

The Most Educated Are the Least Likely to Get Vaccinated Against Covid, According to New U.S. Study