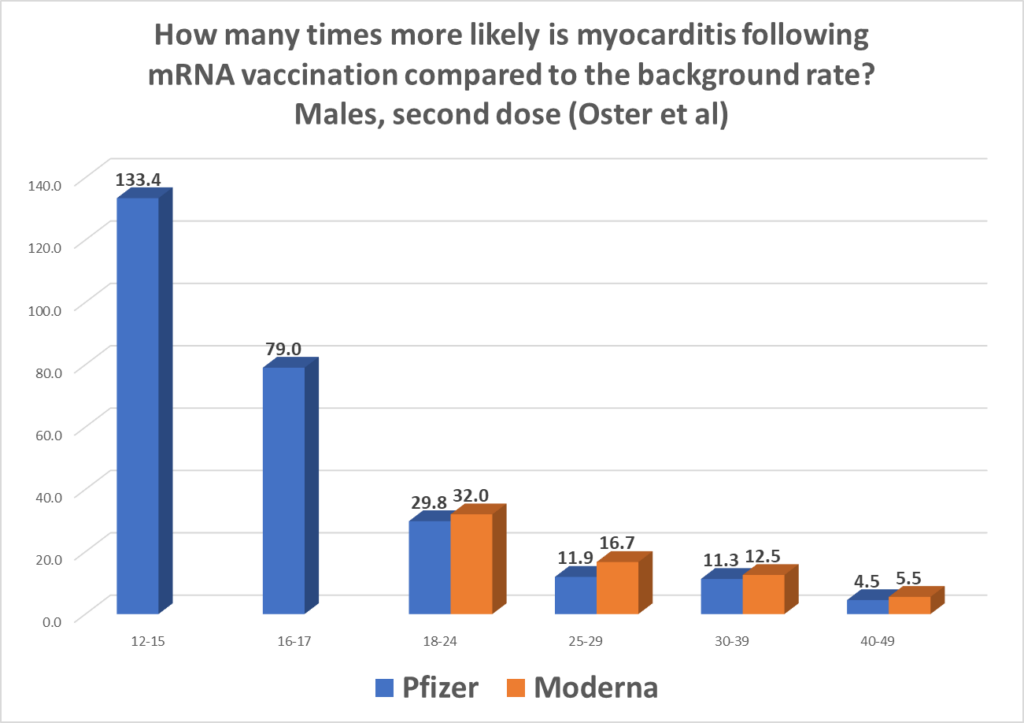 A study published this week in the Journal of the American Medical Association (JAMA) has found that the risk of myocarditis (heart inflammation) after receiving an mRNA Covid vaccine (Pfizer or Moderna) was dramatically increased across many age groups and was highest after the second vaccination dose in young men.

The study comprised a review of reports of myocarditis to the U.S. Vaccine Adverse Event Reporting System (VAERS) that occurred after mRNA Covid vaccination between December 2020 and August 2021 in people over 12 years old. The researchers adjudicated and summarised the reports and compared the rates to expected rates of myocarditis using 2017-2019 data. For those under 30 they conducted medical record reviews and clinician interviews to investigate clinical presentation, test results, treatment, and early outcomes.

They found that out of 192,405,448 individuals receiving a total of 354,100,845 mRNA-based COVID-19 vaccine doses during the study period, there were 1,991 reports of myocarditis to VAERS, of which 1,626 met their case definition of myocarditis. Among the 1,626 cases, the median age was 21 years and the median time to symptom onset was two days. Males comprised 82% of the myocarditis cases for whom sex was reported, and where timing was reported, 82% occurred after the second vaccination dose.

The charts showing myocarditis cases by age and symptom onset are shown below.

Regarding deaths, the researchers write:

To what extent are these differences a reporting artefact, where adverse event reports are only made when a reaction occurs within days of a vaccination, but otherwise the link is unnoticed or dismissed?

The authors note that underreporting is likely, “given the high verification rate of reports of myocarditis to VAERS after mRNA-based COVID-19 vaccination”, and therefore “the actual rates of myocarditis per million doses of vaccine are likely higher than estimated”.

Myocarditis is not the only serious side-effect of these vaccines, and the vaccines do not protect well against infection or transmission. This means it is increasingly clear that the current Pfizer and Moderna Covid vaccines do not have the efficacy and safety profile that would make giving them to children and young people worthwhile or ethical.