We Must “Proceed With Caution”, Says Boris Johnson As He Announces Lockdown Easing on July 19th 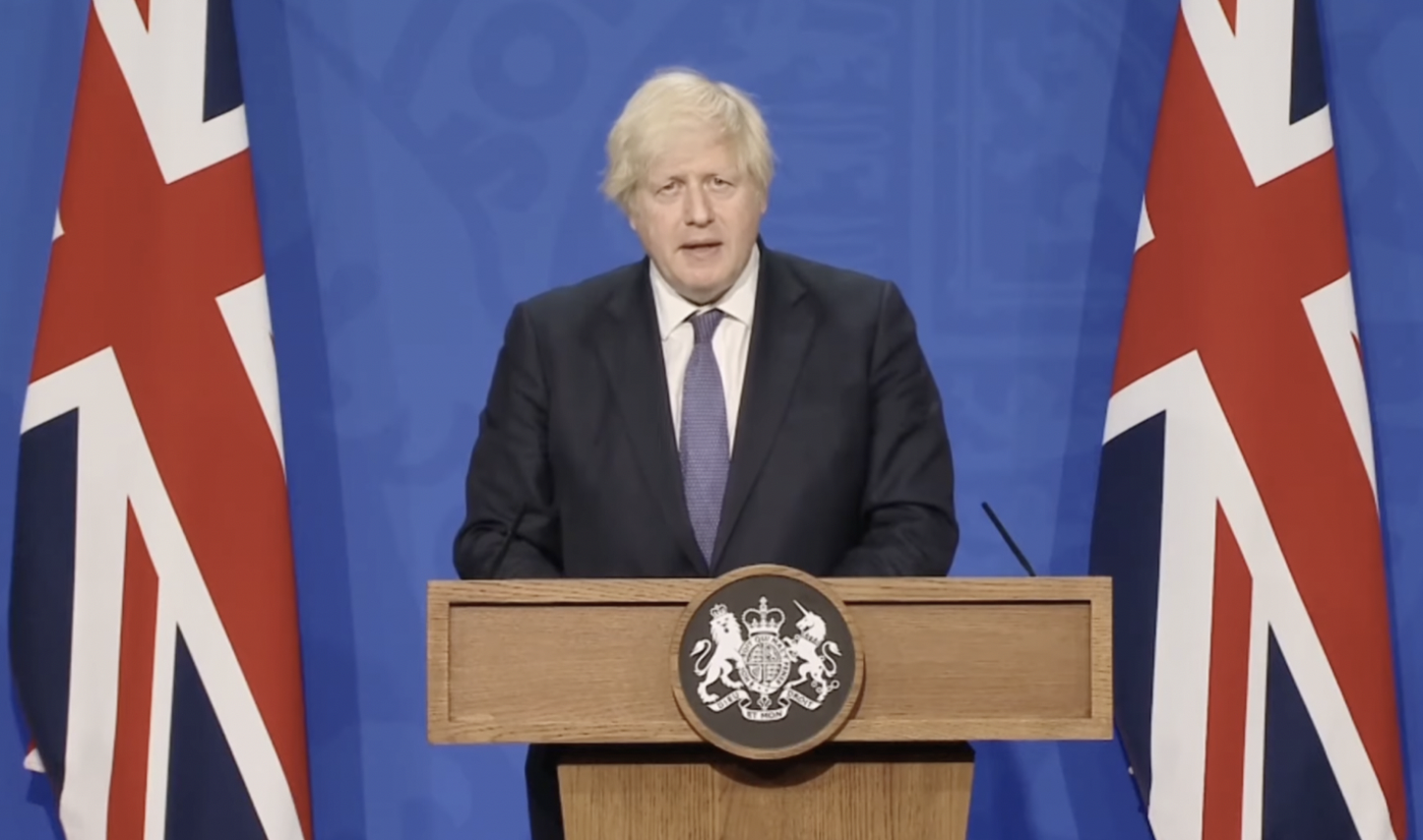 There’s was a particularly downbeat tone to the Prime Minister’s speech on Monday evening in which he said that the country can proceed with easing lockdown restrictions on July 19th, but “with caution”.

The mood was set by Health Secretary Sajid Javid earlier in the day, who confirmed Government plans to urge large indoor venues to implement vaccine passports. In his speech, Boris Johnson said he expects and recommends people to continue wearing face masks after “Freedom Day” and cautioned that “this pandemic is not over”. The Guardian has the story.

Speaking at a Downing Street press conference, the Prime Minister urged “extreme caution” on Monday, as he gave the final confirmation that Step Four of the ‘roadmap’ would go ahead next week.

It will mean nightclubs can reopen, social distancing rules will be abandoned and mask-wearing will no longer be legally enforceable…

But in a marked shift of emphasis from a week ago, when he said mask-wearing would become a matter of “personal choice”, Johnson said he would “expect and recommend” that face coverings be worn in crowded indoor spaces, and people were advised to limit their contact with those outside their households.

He warned businesses such as nightclubs and theatres that it was their “social responsibility” to check their customers’ Covid status; and said he expected the return to offices to take place only “gradually”.

Government documents said that ministers will “consider mandating” the NHS Covid Pass if “sufficient measures are not taken to limit infection”.

The Health Secretary, Sajid Javid, had earlier told MPs: “This is not the end of the road. It’s the start of a new phase of continued caution, where we live with the virus and manage the risks.”

Under questioning from the Health Select Committee Chair, Jeremy Hunt, Javid declined to rule out imposing new restrictions in the future, if ministers judged it to be necessary.

Government advisers expect about 1,000 to 2,000 daily hospital admissions over the summer as restrictions are lifted, and 100-200 deaths a day under what was described a “central scenario”. This would depend on how quickly the public’s behaviour returns to normal.

Minutes published by the Scientific Advisory Group on Emergencies (SAGE) also highlighted the threat of a new vaccine-resistant variant emerging in the U.K., which they warned would pose a risk to the whole world.

Johnson said there would be an increase in cases whenever restrictions were lifted, and it was better to do so now, with the “natural firebreak” of the school summer holidays, than during the autumn or winter when the NHS is already under intense pressure.

“But it is absolutely vital that we proceed now with caution, and I cannot say this powerfully or emphatically enough – this pandemic is not over,” he said. “This disease, coronavirus, continues to carry risks for you and your family. We cannot simply revert instantly on July 19th to life as it was before Covid.” …

Speaking alongside the Prime Minister, Sir Patrick Vallance, the Government’s Chief Scientific Adviser, said that while a rise in infections was both expected and inevitable whenever restrictions were moved, the scale of this, and the subsequent impact on hospitalisations and deaths, depended on the public.

He said: “If behaviour returns immediately to pre-pandemic levels, that would be a very, very big rise. If we go slowly and cautiously, that will be less of a rise.” …

[An official] document said the Government would, in September, review the country’s preparedness for the coming months “which will consider whether to continue or strengthen public and business guidance as we approach the winter”.