The Many Errors of Devi Sridhar 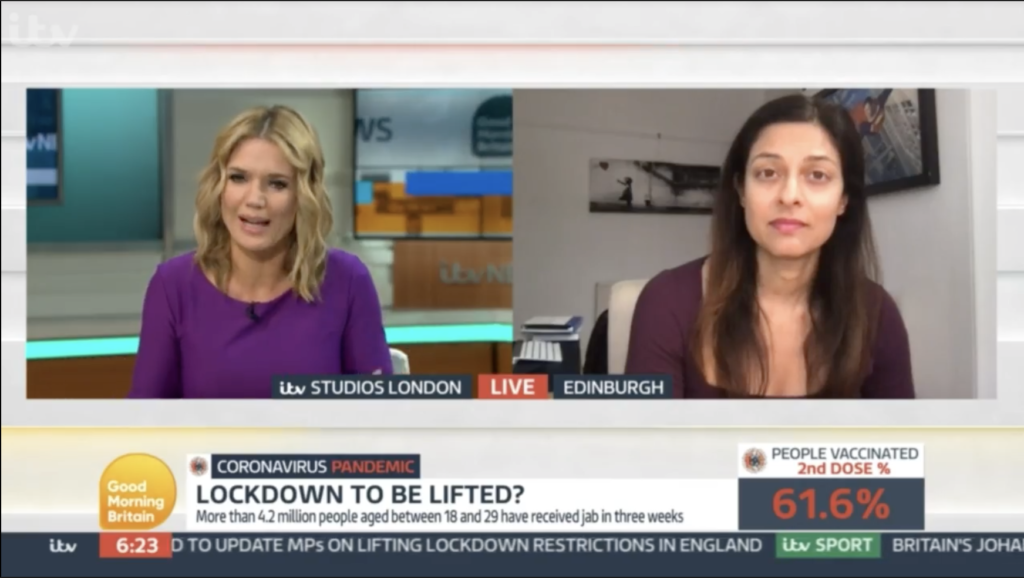 An anthropologist by background with no academic training in medicine, virology or immunology, Prof Devi Sridhar has nonetheless become a go-to person for the broadcast media during the pandemic, where she is allowed to pronounce unchallenged on all things to do with Covid, vaccines and lockdowns. This week, expert group HART has taken her to task for her misinformation about the safety of vaccinating children on Good Morning Britain. She told viewers categorically that “zero children have died because of the vaccine side-effects”, a claim at odds with the multiple reports on VAERS of fatal adverse events in children in the U.S.

Today, she told the BBC that vaccines give more robust and longer-lasting protection than from infection.

We’d rather people get immunity through a vaccine, as studies are showing that vaccine immunity is longer-lasting. You will have a more robust immune response from a vaccine than you do from natural infection.

She doesn’t specify which studies are showing this, but it is contradicted by the findings of researchers examining differing immune responses from infection and vaccination. A paper (not yet peer-reviewed) from a team at New York University in April looked in detail at the different types of immune response from vaccines and infection and found marked differences that did not generally reflect well on the vaccines. Here are some excerpts.

While both infection and vaccination induced robust innate and adaptive immune responses, our analysis revealed significant qualitative differences between the two types of immune challenges. In COVID-19 patients, immune responses were characterised by a highly augmented interferon response which was largely absent in vaccine recipients. …

Critically, induction of [interferons] by viral infection can radically reshape antigen presentation, cellular trafficking, and terminal differentiation of lymphocytes. Infection with SARS-CoV-2 potently induced [interferon] responses, but we did not observe evidence of [interferon] induction by the BNT162b2 mRNA [Pfizer] vaccine.

We observed the presence of cytotoxic CD4 T cells in COVID-19 patients that were largely absent in healthy volunteers following immunisation. … [T]hese features are indicative of protective immune responses and resolution of infection.

Other studies have indicated that the vaccines, unlike infection, do not produce mucosal IgA antibodies, which have been shown to play a crucial role in combating infection in the early stages.

Professor Sridhar also told the BBC that the Delta variant “makes Alpha look easy”. Again, this is untrue. According to Public Health England, the secondary attack rate (SAR, the proportion of contacts an infected person infects) of the Delta variant is currently 10.7% (meaning around 90% of contacts do not become infected), and it peaked at 13.5% at the beginning of May. By contrast, the Alpha variant’s SAR in December hit 15.1% and was still around 11% in March, though has declined further since. The idea that the Delta variant is far more infectious than the Alpha variant ever was and “makes it look easy” is thus a complete misunderstanding of the data.

There are so many well qualified scientists who could talk some sense and balance about COVID-19. Why do broadcasters insist on keep inviting back the under-qualified and repeatedly wrong Professor Sridhar?