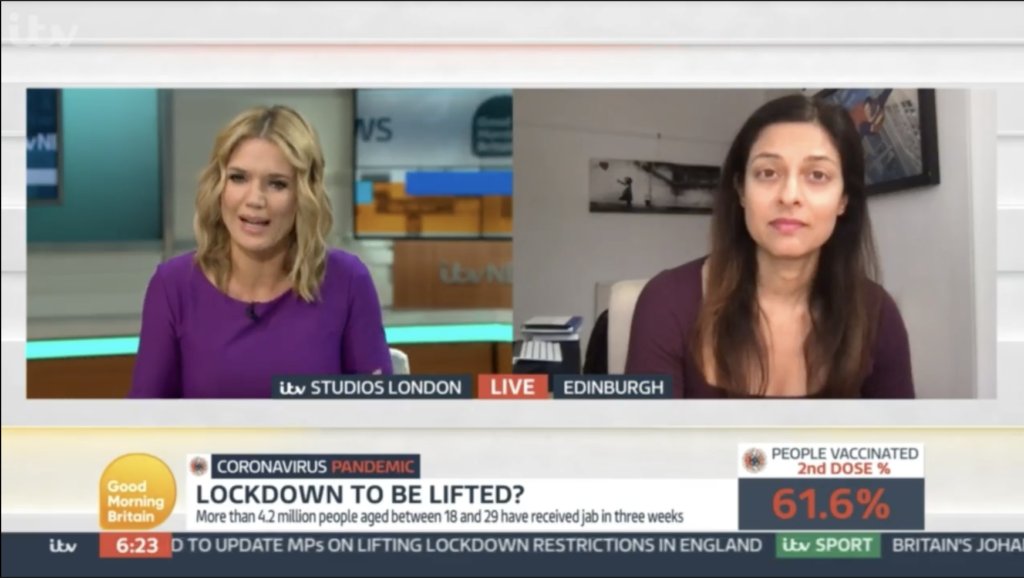 An anthropologist by background with no academic training in medicine, virology or immunology, Prof Devi Sridhar has nonetheless become a go-to person for the broadcast media during the pandemic, where she is allowed to pronounce unchallenged on all things to do with Covid, vaccines and lockdowns. This week, expert group HART has taken her to task for her misinformation about the safety of vaccinating children on Good Morning Britain. She told viewers categorically that “zero children have died because of the vaccine side-effects”, a claim at odds with the multiple reports on VAERS of fatal adverse events in children in the U.S.

Today, she told the BBC that vaccines give more robust and longer-lasting protection than from infection.

We’d rather people get immunity through a vaccine, as studies are showing that vaccine immunity is longer-lasting. You will have a more robust immune response from a vaccine than you do from natural infection.

She doesn’t specify which studies are showing this, but it is contradicted by the findings of researchers examining differing immune responses from infection and vaccination. A paper (not yet peer-reviewed) from a team at New York University in April looked in detail at the different types of immune response from vaccines and infection and found marked differences that did not generally reflect well on the vaccines. Here are some excerpts.

While both infection and vaccination induced robust innate and adaptive immune responses, our analysis revealed significant qualitative differences between the two types of immune challenges. In COVID-19 patients, immune responses were characterised by a highly augmented interferon response which was largely absent in vaccine recipients. …

Critically, induction of [interferons] by viral infection can radically reshape antigen presentation, cellular trafficking, and terminal differentiation of lymphocytes. Infection with SARS-CoV-2 potently induced [interferon] responses, but we did not observe evidence of [interferon] induction by the BNT162b2 mRNA [Pfizer] vaccine.

We observed the presence of cytotoxic CD4 T cells in COVID-19 patients that were largely absent in healthy volunteers following immunisation. … [T]hese features are indicative of protective immune responses and resolution of infection.

Other studies have indicated that the vaccines, unlike infection, do not produce mucosal IgA antibodies, which have been shown to play a crucial role in combating infection in the early stages.

The Many Errors of Devi SridharRead More 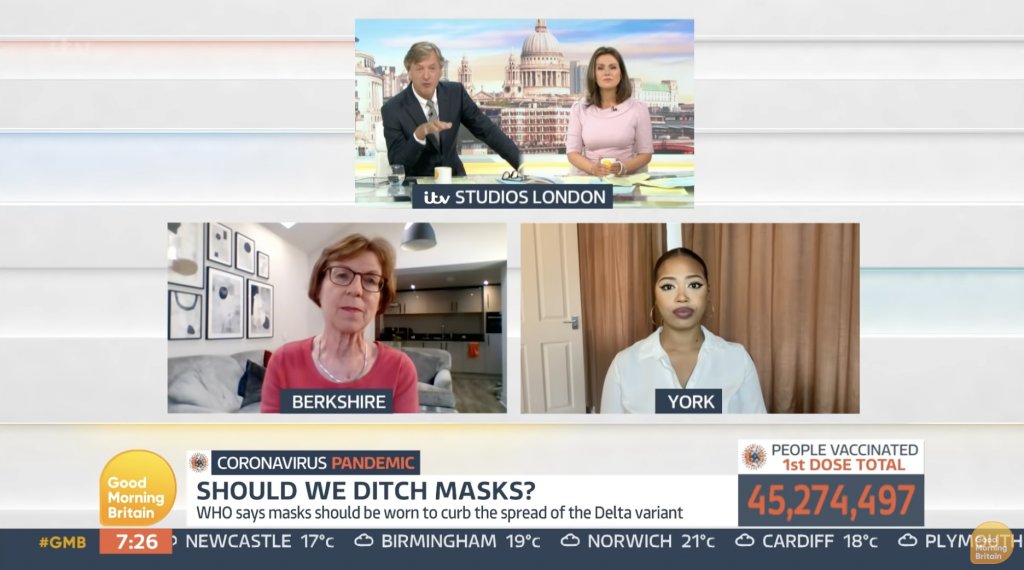 A row has broken out over a question Richard Madeley asked Professor Susan Michie on Good Morning Britain. After she’d questioned the wisdom of lifting the mask mandate on July 19th, he asked her whether her judgment might be influenced by her membership of the Communist Party, given the top-down, big state authoritarianism of Communist regimes, or whether her views were purely based on “the science”. An excellent question, but she rather testily refused to answer, saying she’d been invited on to the programme in her capacity as a professor of psychology and wasn’t there to talk about politics.

You can watch the exchange on YouTube from the 14m 29s moment, but here is a transcript:

Richard Madeley: There’s a point I really have to put to you and you’ll be aware of this because there’s been a lot of commentary about this in the British media about you and it’s to do with your politics and you know what I’m going to ask you. You’ve been a member of the Communist Party for about 40 years now, you’re still a member, and we know that they’re statist. We look at Communist countries around the world and we see that they are tremendously top down dominant and controlled societies that they rule over. I just wonder – and I’m putting this question on behalf of those who wonder about your politics – if your politics actually informs your sense of control? It’s not just the medical arguments, but you have a kind of a political bent to want the state to tell people what to do?

Susan Michie: I’ve come on your programme as a scientist, as do all people who come on to your programme as scientists. They come on to talk about the evidence, relevant theories, how we approach our scientific disciplines, and you don’t ask other scientists about politics so I’m very happy to speak about science which is what my job is and to limit it to that.

RM: So you’re saying that your politics doesn’t inform your opinion on this subject?

SM: I’m saying that I agreed to come on this programme as a scientist and I’m very happy to talk to you about the issues that you’re raising as a scientist which is the same for other scientists that you invite on to the programme.

Madeleley moved on at that point, letting Michie wriggle off the hook, but good on him for asking the question. He’s been one of the few journalists in the mainstream media to ask tough questions of Government ministers and advisors about their management of the coronavirus crisis.

Needless to say, not everyone saw it that way. According to the Independent, Twitter users strongly disapproved.

Viewers of the show were unimpressed by Madeley’s line of questioning, accusing the presenter of taking “cheap shots” at Michie.

“If you missed Richard Madeley’s McCarthyite questioning of Professor Susan Michie, around 7.25am, do try to find it on catch up TV. It may scare the hell out of you,” one viewer commented.

“I try not to use profanity on here, struggling now as I have just witnessed the most pompous pathetic & rude Richard Madeley talking to a medical expert & equate her science knowledge with her politics,” another wrote.

One Twitter user posted: “That ‘question’ from Richard Madeley was basically to challenge Susan Michie’s scientific credentials and accuse her of wanting to live in a dictatorship, she put him in his place, he is a dangerous man.”

But my Twitter feed told a different story. Michael Senger, a longstanding lockdown sceptic, tweeted: “Susan Michie expresses outrage when asked if her 40-year membership in the Community Party might inform her policies. Apparently, it’s ok to be a communist, but not to ask if this migth be connected to her open endorsement of communist China’s policies.”

Tracey Follows then came up with an amusing reply to Michael’s tweet: “Well that’s the first psychologist/behavioural scientist I’ve heard not wanting to promote the notion of (unconscious bias) on the media for a very long time.”

The row rumbled on, with another “scientific expert” and masking zealot – Deepti Gurdasani – claiming it was “misogynistic” of Madeley to ask Michie about her politics – eh? – and demanding GMB issue an apology as a condition of her ever appearing on the programme again.

I really don’t get why it was “misogynistic” of Madeley to ask Susan Michie whether her hard left politics have affected her position on mask mandates. Of course they have! After all, forcing people to wear masks as a condition of participating in certain activities is a flagrant breach of their liberty and the reason Michie doesn’t care about that and thinks public health concerns should take priority (even though there’s precious little evidence that masks reduce transmission of the virus) must in part be because she’s a communist, who famously don’t put much value on individual freedom. And the reason Madeley hasn’t put the same question to other members of SAGE is not because Miche’s a woman, but because she’s the only one who’s been a member of the Communist Party for the past 40 years. 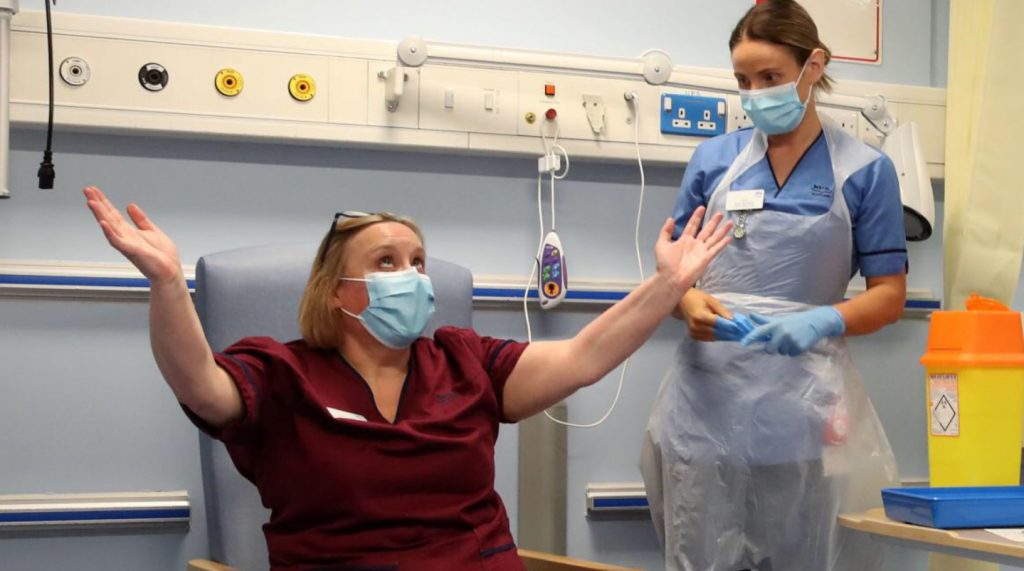 The GMB Union has hit back against the prospect of care home workers being forced to take Covid vaccines. Rachel Harrison, GMB National Officer, says the Government doesn’t have “the foggiest idea or concern about the impact their decisions make on a workforce already suffering from many of the worst political failures during the pandemic”. The union has warned that more than a third of its members in social care would consider quitting if vaccines are mandated.

The i has more.

GMB said that the move, which is being considered by the Government, was an attempt to “strongarm” care workers into taking the jab.

Under the plans, care home staff in England who work with older people would be required to get the jab or risk losing their jobs. They will reportedly have 16 weeks to get vaccinated.

One in six care workers – around 52,000 – have not had the vaccine despite being eligible.

Rachel Harrison said: “Carers have been at the forefront of this pandemic, risking their lives to keep our loved ones safe, often enduring almost Victorian working standards in the process.

“The Government could do a lot to help them: address their pay, terms and conditions, increasing the rate of and access to contractual sick pay, banning zero hours, and ensuring more mobile NHS vaccination teams so those working night shifts can get the jab,” she said.

“Instead, ministers are ploughing ahead with plans to strongarm care workers into taking the vaccine without taking seriously the massive blocks these workers still face in getting jabbed.”

“The Government’s sledgehammer approach now runs the risk that some care staff may simply walk away from an already understaffed, undervalued and underpaid sector,” she said.

On Tuesday morning, Cabinet minister Liz Truss insisted that the Government had not yet committed to the plans, saying that officials were “currently consulting on this issue” but that a decision would be “very imminent”. The Government have refused to rule out the move.

However, Ms Truss said it was “incredibly important” for care home staff to be vaccinated. …

The Government is also planning a consultation on whether Covid jabs should be made compulsory for all NHS staff, alongside those in social care. According to official data, 151,000 NHS workers – just over one in 10 – have not have [sic] the vaccine.

Stop Press: Health Secretary Matt Hancock has confirmed that plans to force care home staff to get vaccinated against Covid will go ahead.