Why Have the Scots Been So Compliant? 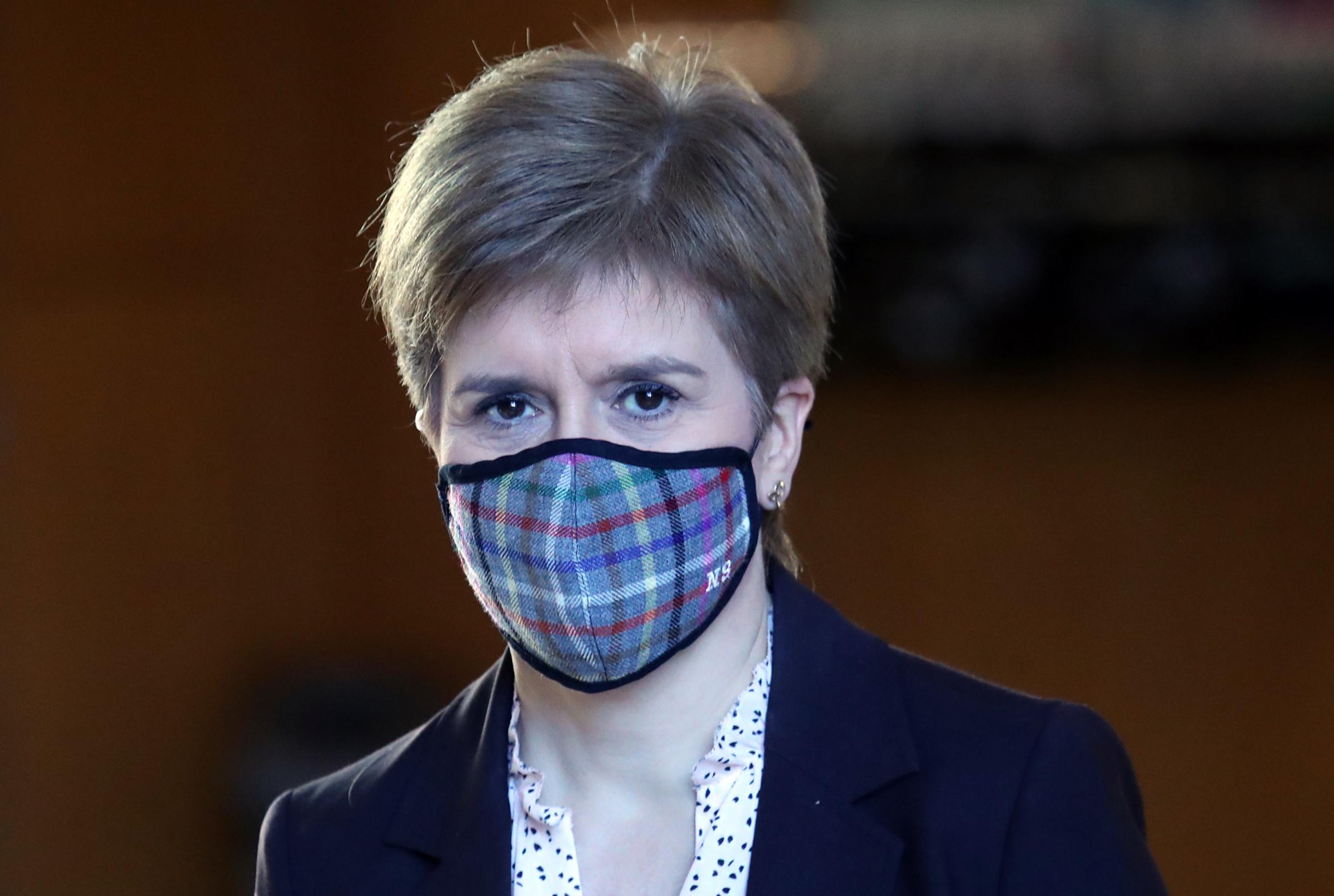 We’re publishing a guest post today by two Scottish academics, Professor Roger Watson and Dr. Niall McCrae, about why the Scots have proved so willing to comply with the SNP’s draconian Covid restrictions. Their unprotesting acceptance of the cancellation of Hogmanay is particularly mystifying given that the latest data suggests only one Omicron patient has been admitted to intensive care in Scotland.

Hogmanay has always been a special night in the Scottish calendar. But looking forward to ‘the bells’ at a Glasgow bar, dozens of revellers were taken aback by the sudden arrival of a troop of police officers. The Avant Garde bar was known to be relaxed on Covid restrictions, and the police had apparently been tipped off that a couple had taken to the dance floor. Six vans arrived, and the ensuing scenes (later reported by the mainstream media but only after going viral on Twitter) showed that in Sturgeon’s Scotland the priority is not protecting public health but ensuring full compliance with the draconian rules. As in the film Footloose, set in a religiously rigid American town, dancing is considered a danger to public order.

How did Scotland become such an oppressive society? This, we believe, is rooted in two potent forces: first, the engrained sense of subjugation (actual or perceived) by the English; and secondly by a predilection to Calvinist discipline.

Scots, especially SNP voters, tend to see the Battle of Bannockburn in 1314 as the defining point of Scottish history. This is reflected in that dreadful dirge Flower of Scotland that passes for a national anthem. But perhaps the defining moment in Scottish history was much later in 1746 when, in less than an hour, the Jacobite army of Bonnie Prince Charlie was wiped from the battlefield at Culloden. As the muskets cooled, with the smoke from the campfires still rising from the encampments, the largely English troops slaughtered the wounded and chased the rest to ground and summary execution. Highland dress was banned and the powerful clan structure was dismantled.

Soon a prolonged genocide took place as the Highlanders – and many Lowlanders – were driven from their crofts to make way for sheep farming. As in the Oklahoma dust storms depicted in John Steinbeck’s Grapes of Wrath, great swaths of Scotland became infertile for crops and rural dwellers fled by the tens of thousands to North America. Although not quite as devastating as the Irish potato famine, Scotland has never fully recovered from this experience.

Then the religious habit of the Scots is interesting. Back in 1562 Calvinism was made the official state religion, leading to the Protestant work ethic that made Scotland so prominent in the Industrial Revolution and the British Empire. But it also brought God-fearing puritanism. King James VI of Scotland – baptised a Catholic but turned to Presbyterianism – was obsessed with the threat of witchcraft, writing a treatise Demonology and persuading educated people that dark forces lurked everywhere. After accession to the British throne, he passed a law in 1604 stiffening punishment for witches. He was keen on the drowning test, whereby the woman was guilty if she survived.

An important development was the Free Church, which split from the Church of Scotland in 1843 and swept across the highlands and islands. A good illustration of the severity of the ‘Wee Free’ was in the remote island of St Kilda, where the small community was under the spiritual guidance of Reverend John Mackay. As noted by Charles Maclean in his book St Kilda: Island on the Edge of the World:

Shortly after his arrival on the island in 1865 he established a vibrantly harsh rule over his parishioners. Services on Sunday at eleven, two and six o’clock were made to last from two to three hours each. Mackay preached long, repetitious sermons in Gaelic, which invariably included the same message of hell-fire and eternal damnation to all sinners. Complete attention was demanded throughout these dim effusions. Children were brought to church from the age of two and trained to keep absolutely still and silent.

At least the children were not masked, as they have been for nearly two years in the Scottish Covid regime. The Sabbath was strictly observed as a day of nothing but worship. No work was permitted. Also strictly forbidden from Saturday evening to Monday morning were conversations between islanders, singing and whistling. This culture is reflected in the award-winning novel His Bloody Project by Graeme Macrae Burnet, set in the highlands in the 19th century, where church on Sunday was a reprieve from the battened hatches in the ‘black months’ of winter.

Some of this may be explained by remoteness and hardship. But the Scots, in contrast with the more permissive society south of the border, are a rule-bound people who seem to like policing themselves. Do something mundane like drink beer on a park bench, and someone might admonish you: “You cannae dae that!” (unless you’re in a carriage full of football fans, which nobody would dare interrupt). Until recently the ferries from the mainland to the Hebrides stopped on Sundays, to the detriment of the tourist trade. Scots also have a remarkable ability to scythe the tall poppies. No matter what someone’s achievements in life, a dissenter is always within earshot to announce: “Aye, but I kent his faither,” implying that nobody is allowed to be really different.

One of us (NM) wrote Echoes from the Corridors, a history of the mental hospitals in Britain, and found a distinct difference between the asylums of Scotland and England in the Victorian era. In the latter, the harsh conditions were alleviated by weekly dances and beer at every meal, but Scottish institutions were much stricter. Alcohol was banned, and like the current government’s dislike of anyone letting their hair down, a sign on the wall of the main hall at Murray Royal Asylum in Perth stated:

It is sometimes hard to believe that Scotland was the seat of the Enlightenment and had an education system that was the envy of the world. Scotland has punched well above its weight on the international stage for centuries with Scottish scientists, inventors and engineers such as John Logie Baird, Graham Bell, James Watt, Alexander Fleming and others making notable contributions to progress and the well-being of humanity. But those days are over, and the Scottish education system has gone the way of the rest of the U.K. Before one of us (RW) left Scotland in 1999 he chaired the local Catholic primary school board but found that it was impossible to resist the educational dogma of the Scottish Assembly in Edinburgh, with astonishing obedience and kow-towing by educators to the whims of their political masters – long before the SNP took control.

The Covid pandemic was just the opportunity that the SNP required. Nicola Sturgeon exploited the virus for nationalistic fervour and issued a massive virtue signal: “Look at us, we care about each other, not like the callous English.” The Scottish media seems to live in fear of the SNP and has been remarkably uncritical and compliant throughout its reign, particularly during the pandemic. Scotland also has a highly politicised police force ready to do the bidding of the First Minister. Nicola Sturgeon was given a remarkable amount of airtime to browbeat the Scots into submission and advertise her moral superiority. To ensure that she is not challenged by any contrary experts she relies on the photogenic but medically vacuous ‘expert in global health’ Professor Devi Sridhar for covid panegyrics.

We cannot quite fully explain why our former compatriots have rolled over so readily in the wake of COVID-19. But they have, and Nicola Sturgeon continues to take advantage. As we write, Covid-related restrictions – in common with those other Celtic fringes Wales and Northern Ireland – are much stricter than in England with no end in sight. After thousands of Scots crossed the border to celebrate New Year to enjoy an atmosphere at odds with their stifled homeland, Professor Leitch, Scotland’s National Clinical Director, called for even tighter restrictions and Professor Sridhar, from the comfort of her well-appointed domicile, reinforced the new normal of doom and gloom.

It is customary for us Scots to give le mot juste to our national poet Rabbie Burns.

O, wad some Power the giftie gie us
To see oursels as others see us!
It wad frae monie a blunder free us,
An’ foolish notion.