As Three More Studies Show Negative Vaccine Effectiveness, When Will Health Authorities Face Up to What the Data is Telling Us? 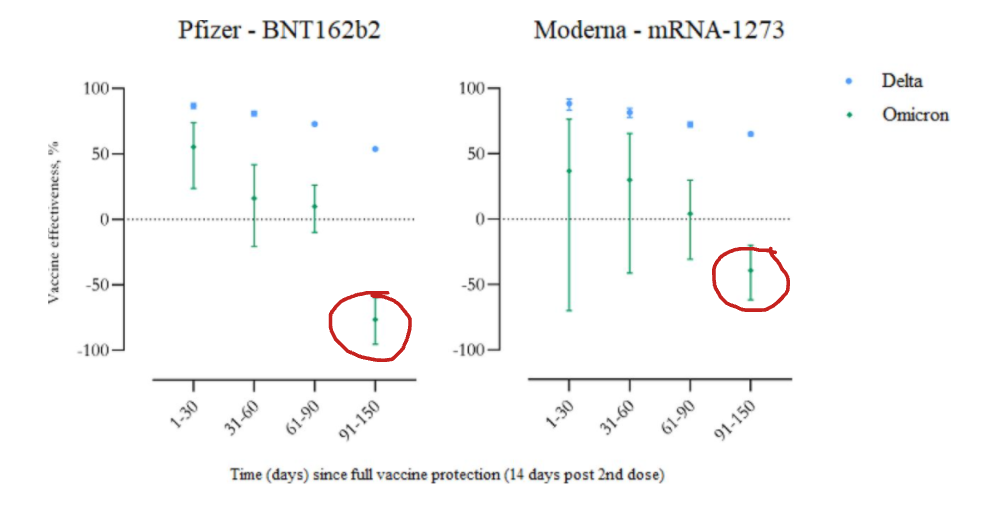 The last two weeks have brought three new studies finding negative efficacy for two vaccine doses, meaning the vaccinated are more likely to be infected than the unvaccinated. These are study findings, not raw data, so have been adjusted for various biases and confounders, making it harder to dismiss them as anomalous or skewed.

The first is a pre-print study from Denmark, published on December 23rd, which looked at nearly all PCR-positive SARS-CoV-2 infections in Denmark from November 20th to December 12th and investigated them to see if they were likely to be the Omicron variant. By comparing the vaccination status of those infected, the researchers found a vaccine effectiveness against the Omicron variant of minus-76.5% for Pfizer and minus-39.3% for Moderna three months after double vaccination (see chart above), meaning the double-vaccinated were considerably more likely to be infected than the unvaccinated. They found the vaccine effectiveness against Omicron was significantly lower than against Delta, with Pfizer vaccine effectiveness at 53.8% and Moderna at 65% against Delta after three months. They reported that a third dose of Pfizer got vaccine effectiveness against Omicron back up to 54.6%, at least for a month. The full results are in the table below.

The latest vaccine effectiveness study from the UKHSA confirms these results. Against Omicron, the UKHSA reports zero or negative vaccine effectiveness from a double-dose of all three vaccines (AstraZeneca, Pfizer and Moderna) after five months. The third dose takes it up again, but only into the 40-60% range, and dropping fast.

A new study in Eurosurveillance from Norway also backs up the observation of negative vaccine effectiveness against Omicron, with a higher proportion of those who tested positive in the particular outbreak in the study being double-vaccinated than those who did not test positive (98% versus 93%).

Some studies had already found negative vaccine effectiveness against Delta, in line with the unadjusted figures from the UKHSA, though many people had dismissed these results as anomalous or biased. With Omicron, the reports of negative efficacy are becoming impossible to ignore, with even the UKHSA publishing graphs showing it after three months on two doses. At some point, health authorities are going to need to grapple with what the data is showing on this and stop pretending it isn’t there.