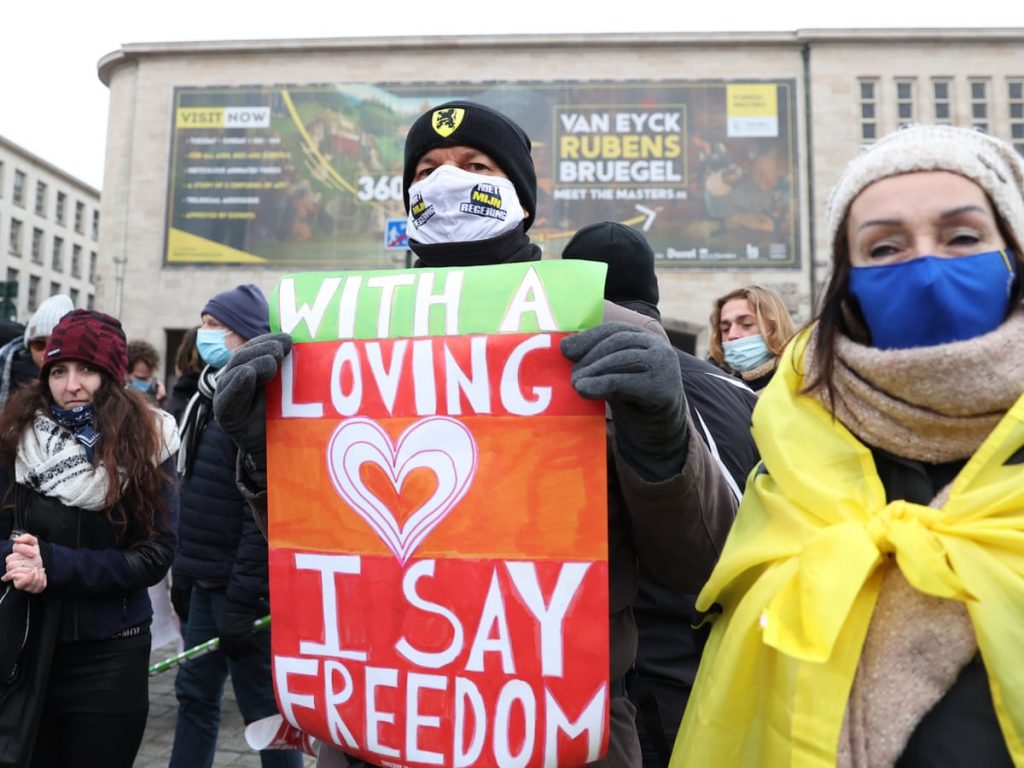 In response to the Belgian Government tightening Covid restrictions last Friday, anti-lockdown protesters marched through the streets of Brussels, the nation’s capital. Belgium has become the latest European country to receive this kind of backlash after imposing new Covid measures, with similar anti-lockdown protests occurring in Austria and the Netherlands only yesterday. MailOnline has the story.

Hordes of protesters marched through the streets towards the headquarters of the European Union, shouting ‘Freedom! Freedom!’ and carrying placards which read ‘everyday fascism’ emblazoned with yellow stars, drawing comparisons with the identification tags Jews were forced to wear in Nazi-occupied Europe.

The Government on Friday introduced fresh Covid restrictions – the third week in a row that rules have been tightened amid the latest surge in cases.

Prime Minister Alexander De Croo announced that nurseries and primary schools will close for the holiday season a week early, and children must now wear masks from the age of 6 years-old. Indoor events will only be allowed with a maximum of 200 people.

Previously, the Government closed nightclubs, and ordered bars and restaurants to shut at 11pm for three weeks.

The main crowd in Sunday’s mostly peaceful march had already dispersed when about 100 protesters ran into a riot police barricade cordoning off access to the European Commission.

After a brief stand-off with police, protesters threw rubbish and other objects, including a bicycle, at police and set off firecrackers and flares.

It comes a day after many cities in Europe saw demonstrations against new restrictions in the run up to Christmas – upwards of 40,000 people held protests in Vienna, Austria, while thousands more piled into the streets of Utrecht in the Netherlands and Frankfurt in Germany.

Austria last month became the first country in Western Europe to reimpose a lockdown, which is set to last 20 days, and said it would make vaccinations mandatory from February.

It comes as governments across Europe warn of the spread of the highly transmissible Omicron variant which has now been registered in several nations including the U.K., Ireland, France, Germany, Belgium, the Netherlands, Austria and Norway…

Meanwhile in Austria, police used pepper spray and made several arrests on Saturday when more than 40,000 people marched through Vienna to protest against a lockdown and plans to make vaccinations compulsory.

Faced with a surge in infections, the government last month made Austria the first country in Western Europe to reimpose a lockdown and said it would make vaccinations mandatory from February. 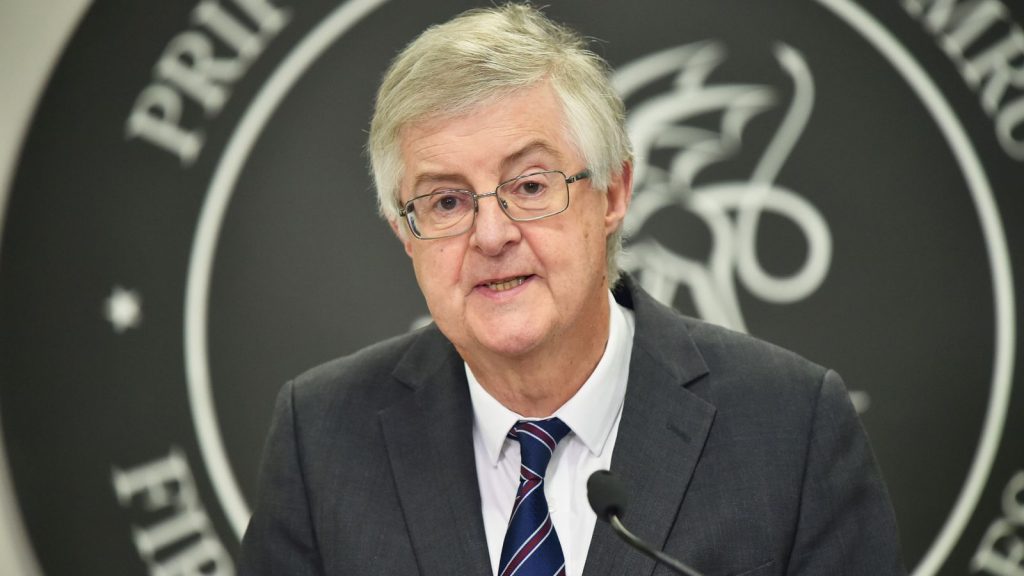 Mark Drakeford has said that a decision on whether to extend the Welsh Government’s vaccine passport scheme to pubs won’t be taken until the last possible moment, with the Welsh First Minister adding that “circumstances and knowledge are developing so fast”. Drakeford also mentioned that imposing vaccine passports on pubs would not have been taken into consideration if the Omicron variant had never emerged. BBC News has the story.

A decision on whether to extend Covid passes to pubs and restaurants will be made at the “last minute”, First Minister Mark Drakeford has said.

Ministers are to consider whether to expand the scheme over the next week, with the next Covid rules review due on Friday.

Drakeford said the emergence of the Omicron variant has led to knowledge and circumstances developing “so fast”.

The first case of Omicron was confirmed in Wales on Friday.

They show if someone has been fully vaccinated or tested negative for Covid in the past 48 hours.

The Welsh Conservatives have said they remained opposed to Covid passes because they do not seem to present “additional benefits” to stopping Covid.

But the First Minister told Politics Wales he did not think the Welsh Government would be considering extending passes to hospitality if it had only been dealing with the dominant Delta variant.

He said: “We’ve got another week to go. We will learn a lot in that week about the Omicron virus.

“If we were to do it, it would simply be to help those businesses to stay open and still attracting customers through the door because people would feel confident that everybody else in that setting were either vaccinated or had taken a lateral flow test.

“But we haven’t made that decision, and we won’t make that decision right up until the day we have to, because circumstances and knowledge are developing so fast around the new variant that you ought to wait to have the maximum amount of information that you can.”

Sam Rowlands, Conservative Member of the Senedd (MS) for North Wales, said the Government should ensure “every part of our energies” is put in to rolling out booster jabs rather than extending use of the pass.

Plaid Cymru deputy leader Sian Gwenllian MS said: “We need to rely on the evidence and listen to what the experts say before bringing in any new regulations but if they are needed, they are needed.”

Drakeford said he could not claim the Covid pass scheme was making a difference “above the fact that it makes that extra marginal difference alongside everything else you do”. 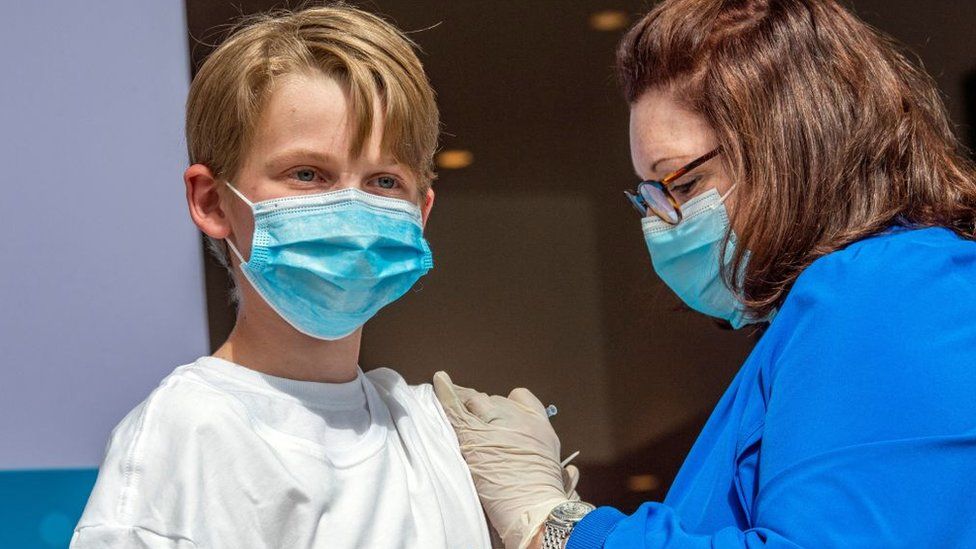 Vaccine advocates in Canada have offered to secretly take children to a vaccination clinic if they desire to be jabbed. A community organiser called Julian Wotherspoon tweeted her support for ignoring parental consent and authority, and her willingness to take anyone aged between 13 to 17 years-old to get vaccinated, despite the recommendation from the health authorities that families should discuss the issue with their children before coming to a firm decision. RT has the story.

The row began on Friday, after a Saskatchewan community organizer named Julian Wotherspoon posted a Twitter message offering to assist any 13 to 17 year-olds who wanted to get vaccinated despite opposition from their parents. “I’m your ride to the clinic,” she said. “If anyone asks, I’m taking you and my kids to a movie. Let’s do this.”

According to the Saskatchewan Health Authority, children aged 13 years-old and older “who are able to understand the benefits and possible reactions” of a vaccine do not need a parent’s permission to be jabbed. Equally, teens can refuse immunisation by giving “mature minor” consent to their health provider.

The authorities recommend families discuss the issue together with their children before they make the decision, however.

Wotherspoon’s tweet caused quite a stir online, eliciting both praise and outrage. She has since made her account private.

Another proponent of children’s vaccination, self-described “mummy blogger” Tenille Lafontaine, also of Saskatchewan, called Wotherspoon’s offer “amazing”. She added, “I’ve heard of a few teens getting the vaccine on their own because their parents are insane in the membrane. The kids are gonna be alright. Side note: I’m available to drive anytime.”

Other commenters pushed back, telling the two women to “stay away from other people’s children.” Some went as far as to liken their secret transport offer to kidnapping.