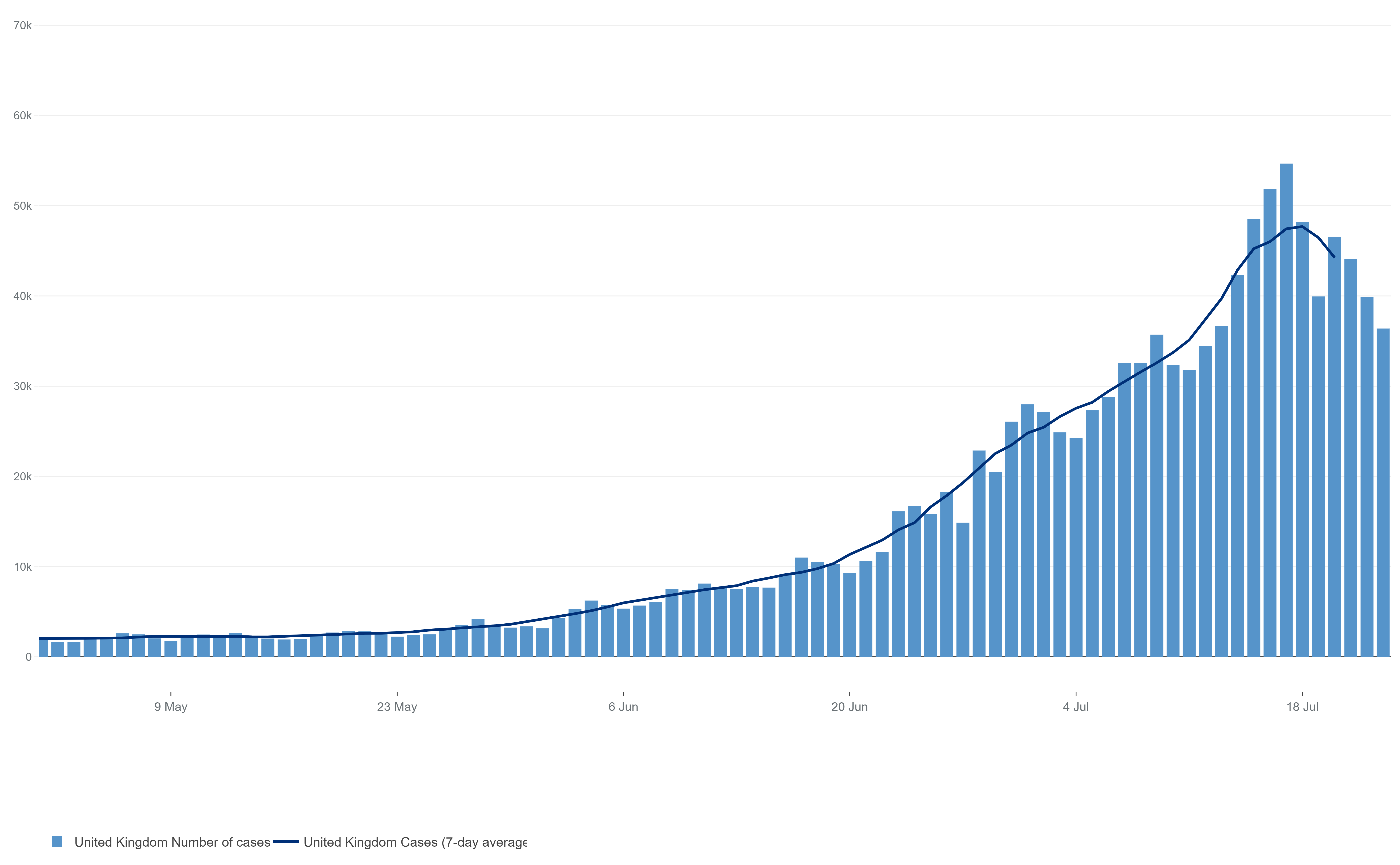 How many positive tests will we reach following the lifting of restrictions? One hundred thousand, as predicted by Health Secretary Sajid Javid? Two hundred thousand, as Professor Neil Ferguson suggested? One thing all the doom-mongers have been confident of is that there will be an exit wave as restrictions are lifted and it will be big. After all, lots of people are still unvaccinated, the vaccines are imperfect, and everyone is mixing again.

Yet what has happened? In the past six days new reported infections have declined from a high of 54,674 on Saturday July 17th down to 36,389 today, a drop of over 33% in just six days. This is despite the lifting of restrictions on ‘Freedom Day’ last Monday.

It can’t be repeated often enough that this demolishes all the models and exposes their assumptions as fundamentally flawed. None of the models predicted anything other than exponential growth at this point as people mingled and dropped the masks. After all, prevalence was high and rising, people were mingling more not less, lots of people are still susceptible (so they assume) – why should it stop? But it did. Unless and until a model can predict data like this it should be regarded as little more than elaborate but flawed guesswork.

Why have infections declined despite reopening in the middle of a surge of the ‘super-infectious’ Delta variant? The most likely explanation is that the surge is over as the Delta variant is now exhausting the pool of people susceptible to it – herd immunity, in other words. New data from Public Health England released today shows that the household secondary attack rate (the proportion of household contacts an infected person infects) of the Delta variant was just 11.1% in late June, meaning even in the middle of the surge almost 90% of people who lived with an infected person were not infected – that’s how ‘super-infectious’ the Delta variant really is. This compares to a direct-contact secondary attack rate for the Alpha variant during the winter surge of 15.5%, which undermines the claim that the Delta variant is so much more infectious than Alpha. This is an indication of how many people have a significant degree of immunity to the virus, including the Delta variant, and hence it doesn’t take long for herd immunity (briefly disrupted by the new variant, which partially evades some people’s immunity) to be restored and the epidemic to enter decline. (See here for a fuller explanation of this.)

It is still possible that this decline is a short term anomaly and the rise will resume shortly – though it hasn’t yet in Scotland, which peaked way back at the end of June and has been dropping fast for nearly a month now.

If the fall continues it should embolden sceptics in Government and Parliament to push back against all the authoritarian nonsense being inflicted on the country following so-called ‘Freedom Day’ and enable them to secure us a true freedom, one which finally consigns Covid to where it belongs – no longer looming large in our day-to-day lives.

Italians to Require Covid “Green Passes” to Get Into Restaurants, Gyms and Theatres