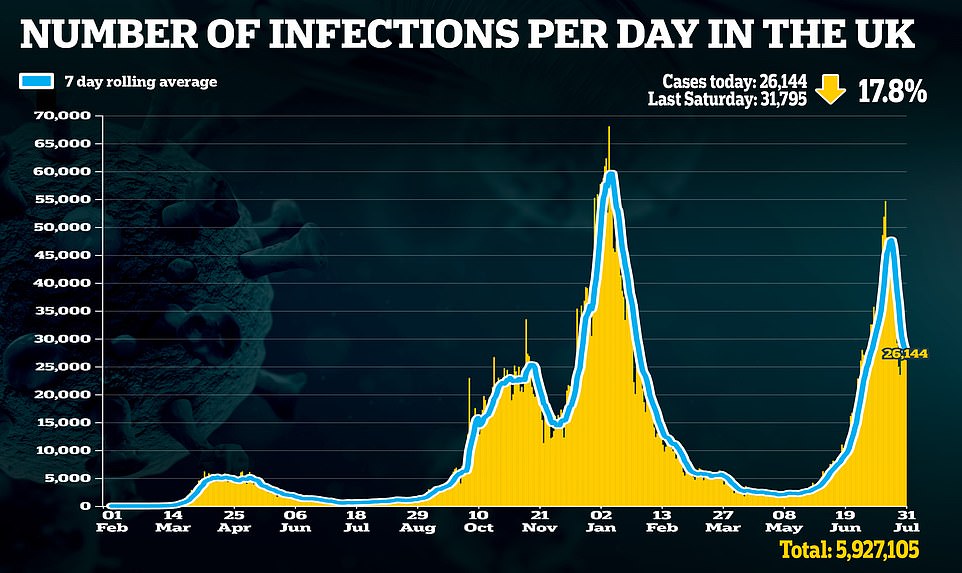 Positive Covid tests fell again today, both compared to yesterday and compared to last Saturday, making it the tenth day in a row reported infections have dropped week-on-week. MailOnline has more.

Covid cases have fallen week-on-week for the tenth day in a row, in another sign of hope as the pandemic appears to be shrinking — but experts warn the drop off could be down to less [sic] people getting tests.

And the number of people dying with the virus has fallen to 71. The number of victims decreased 17.4% from 86 last Saturday.

The baffled Government scientists, whose gloomy predictions continue not to materialise, have now come up with another reason why positive test reports might be dropping: people are avoiding being tested because they don’t want to self-isolate.

I suppose some will be, with holidays approaching. But the ONS breakdown by age also suggests there’s a difference in the infection rate between people under 16 and over 16, with the latter having peaked while the former had not as of July 24th. That in itself is a bit confusing, as children under 16 don’t live on their own, but it does suggest that some of the drop in positive tests reported by PHE might be because parents have stopped testing their children. 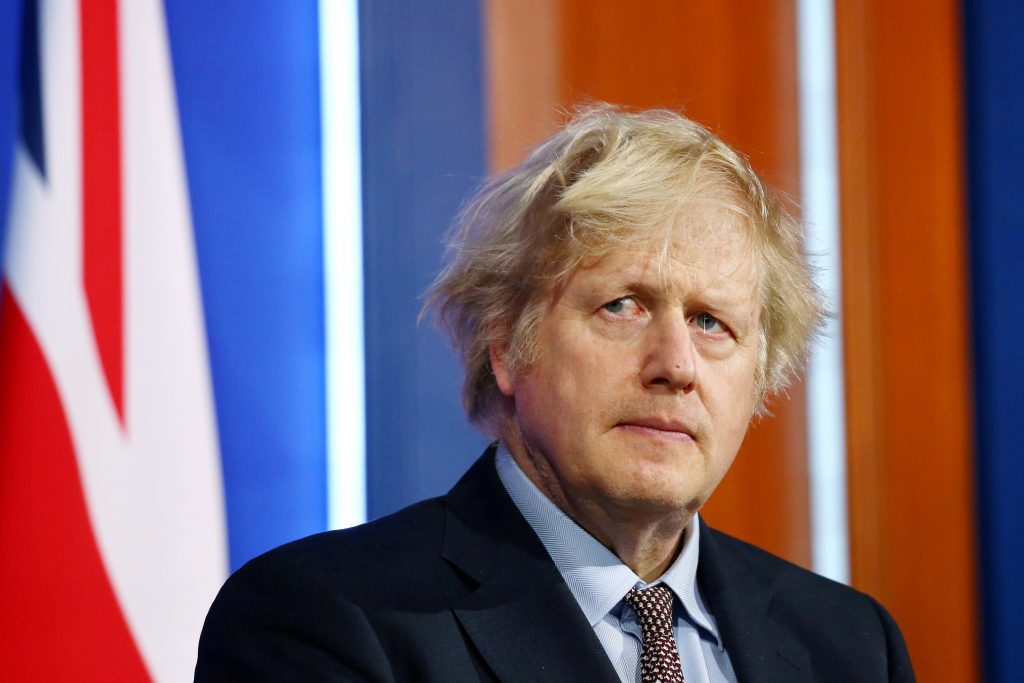 Boris Johnson today told reporters that Covid is “still a very dangerous disease” as he encouraged people to stick with self-isolation when ‘pinged’. “Don’t forget, we will be coming forward with a new system from August 16th,” he said during a visit to Surrey Police HQ in Guildford. “Until then please everyone, stick with the programme.”

I’ve noticed, obviously, that we are six days in to some better figures. But it is very, very important that we don’t allow ourselves to run away with premature conclusions about this. Step Four of the opening-up only took place a few days ago, people have got to remain very cautious and that remains the approach of the Government.

The PM’s remarks may be little more than prudent caution, but describing Covid as “still a very dangerous disease” doesn’t tally with the fatality rate, always very low for most of the population at below 0.1%, and now apparently reduced further including for those at higher risk by the vaccination programme. Does Boris not believe the vaccines are effective? If he doesn’t, what was the point of them? The Government needs to sort out its messaging on this.

“This is Still a Very Dangerous Disease,” Says Boris Johnson. But Neil Ferguson Disagrees: “The Equation has Fundamentally Changed”Read More 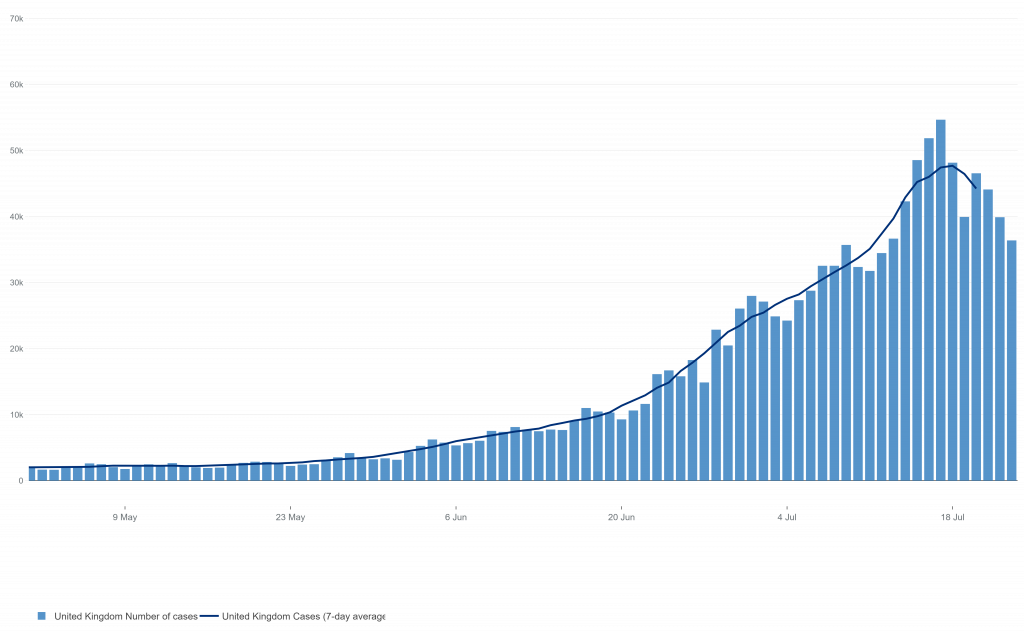 How many positive tests will we reach following the lifting of restrictions? One hundred thousand, as predicted by Health Secretary Sajid Javid? Two hundred thousand, as Professor Neil Ferguson suggested? One thing all the doom-mongers have been confident of is that there will be an exit wave as restrictions are lifted and it will be big. After all, lots of people are still unvaccinated, the vaccines are imperfect, and everyone is mixing again.

Yet what has happened? In the past six days new reported infections have declined from a high of 54,674 on Saturday July 17th down to 36,389 today, a drop of over 33% in just six days. This is despite the lifting of restrictions on ‘Freedom Day’ last Monday.

It can’t be repeated often enough that this demolishes all the models and exposes their assumptions as fundamentally flawed. None of the models predicted anything other than exponential growth at this point as people mingled and dropped the masks. After all, prevalence was high and rising, people were mingling more not less, lots of people are still susceptible (so they assume) – why should it stop? But it did. Unless and until a model can predict data like this it should be regarded as little more than elaborate but flawed guesswork. 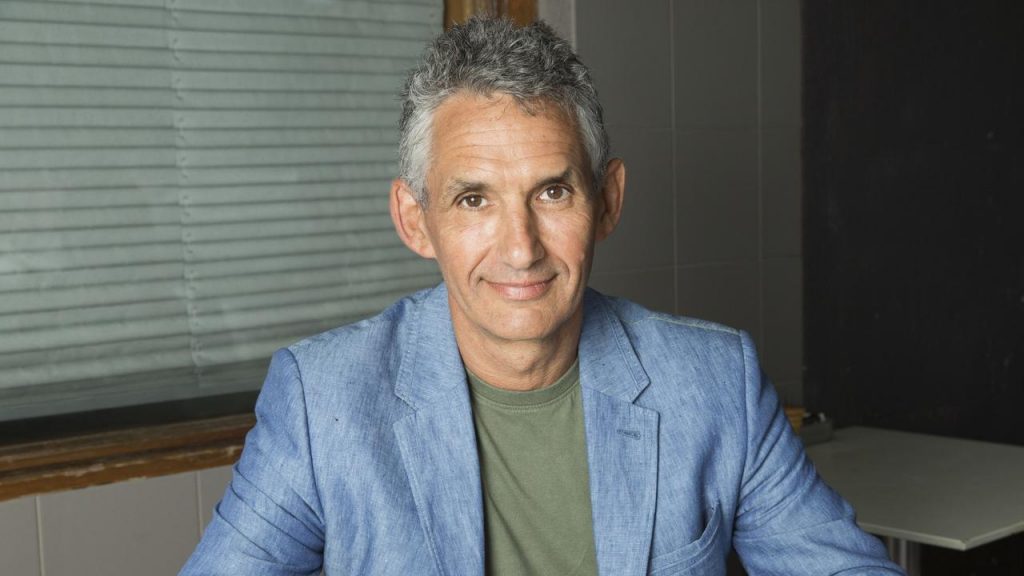 Reported positive Covid tests hit a new recent high yesterday of 48,553, confirming for many that their fears of a big exit wave are coming to pass.

However, Tim Spector, lead scientist on the ZOE Covid Study app and Professor of Genetic Epidemiology at King’s College London, had another message: according to his data, infections are already peaking.

ZOE data for July 11th (data from the app is always four days behind) showed 32,920 symptomatic infections in the U.K., and this appears to have peaked (R is currently estimated to be around 1) and may already be starting to drop (see above).

Why is this so different to the new daily ‘cases’ reported by the Government, which show no obvious sign of peaking?

Infections are Peaking Nationwide as They Fall in the Unvaccinated, Says Professor Tim SpectorRead More 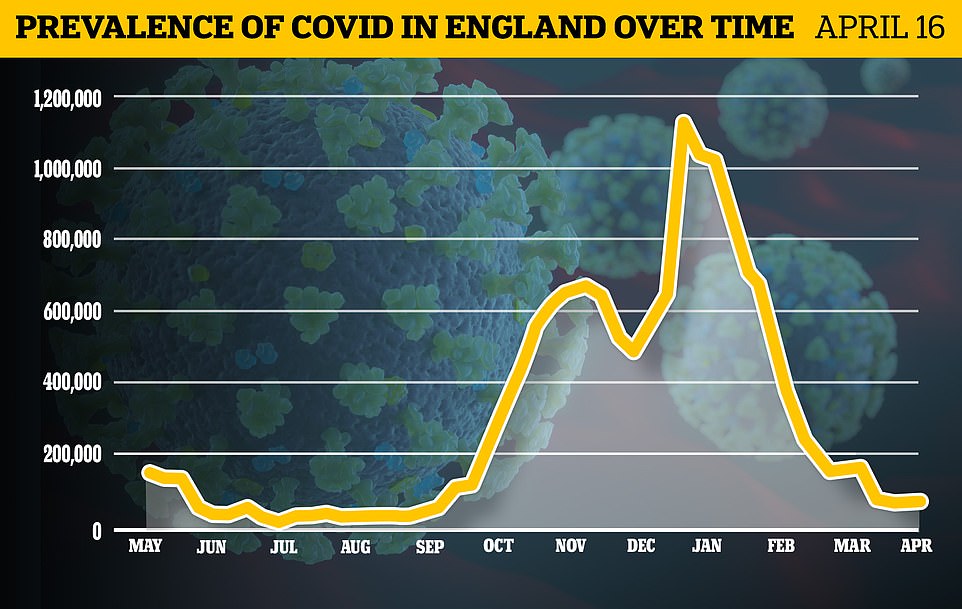 With the ONS reporting today that the number of people infected with COVID-19 in England has fallen to its lowest level since September, researchers at Oxford have said the vaccines are so effective that the UK is no longer in the midst of a pandemic. Sarah Knapton, Science Editor of the Telegraph, has more.

In the first large real-world study of the impact of vaccination on the general population, researchers found that the rollout is having a major impact on cutting both symptomatic and asymptomatic cases.

Sarah Walker, Professor of Medical Statistics and Epidemiology at Oxford and Chief Investigator on the Office for National Statistics COVID-19 Infection Survey, said that Britain had “moved from a pandemic to an endemic situation” where the virus is circulating at a low, largely controllable level in the community.

The new research, based on throat swabs from 373,402 people between December 1st last year and April 3rd, found three weeks after one dose of either the Pfizer or AstraZeneca jab, symptomatic infections fell by 74% and infections without symptoms by 57%.

By two doses, asymptomatic infections were down 70% and symptomatic by 90%.

It comes as infections continue to fall in Britain, dropping 7% in a week, despite the reopening of schools and shops. Deaths have also fallen by 26% and admissions by 19% over the last seven days.

New data from the ONS also showed that Covid was no longer the leading cause of death in March, falling behind dementia and heart disease, for the first time since October.

Stop Press: Just 6% of beds are now taken up by Covid patients at England’s busiest NHS Trust compared to 60% at peak of second wave, an analysis of NHS data by MailOnline shows. 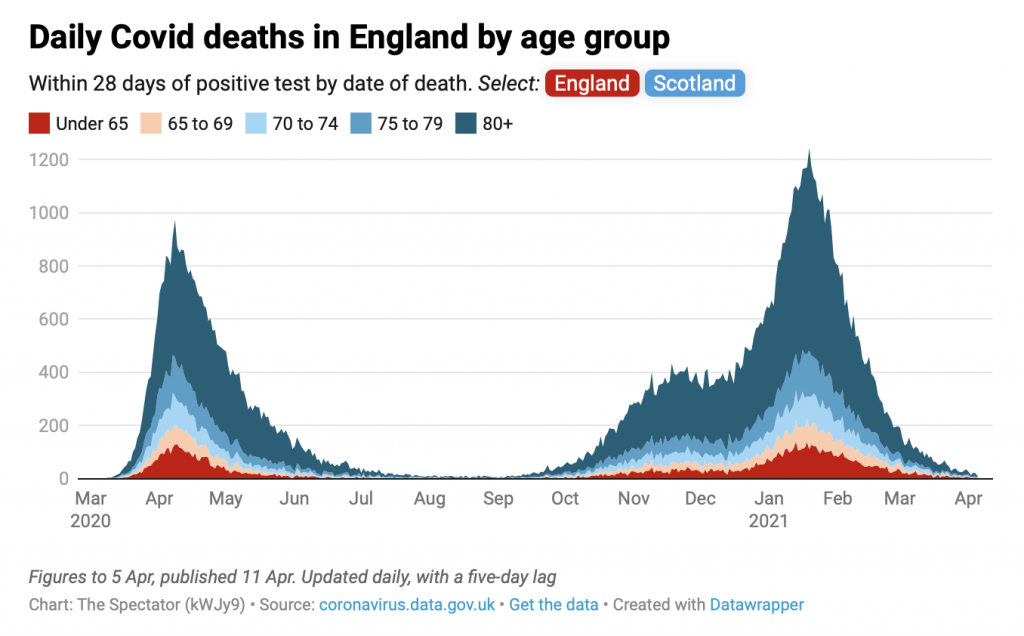 The Spectator has added a new table to its data hub, showing where the current level of Covid infection is in different countries around the world relative to the peak. It shows that Britain has seen the sharpest decline in the developed world, with cases now 97% lower than their peak on January 9th, 2021.

Britain has had one of the worst Covid death tolls in the world: today’s success should be seen in that context. The severity of the spread in UK has left higher recovery immunity even in unvaccinated age groups (almost half of under-25s have antibodies, according to the ONS) which limits the size of any third wave. UCL argues that we’ll hit herd immunity tomorrow: we discuss this in the latest edition of The Spectator’s Coffee House Shots podcast. In general, Covid is back down to (or below) summer levels and almost all of those at risk of fatal infection have been protected.