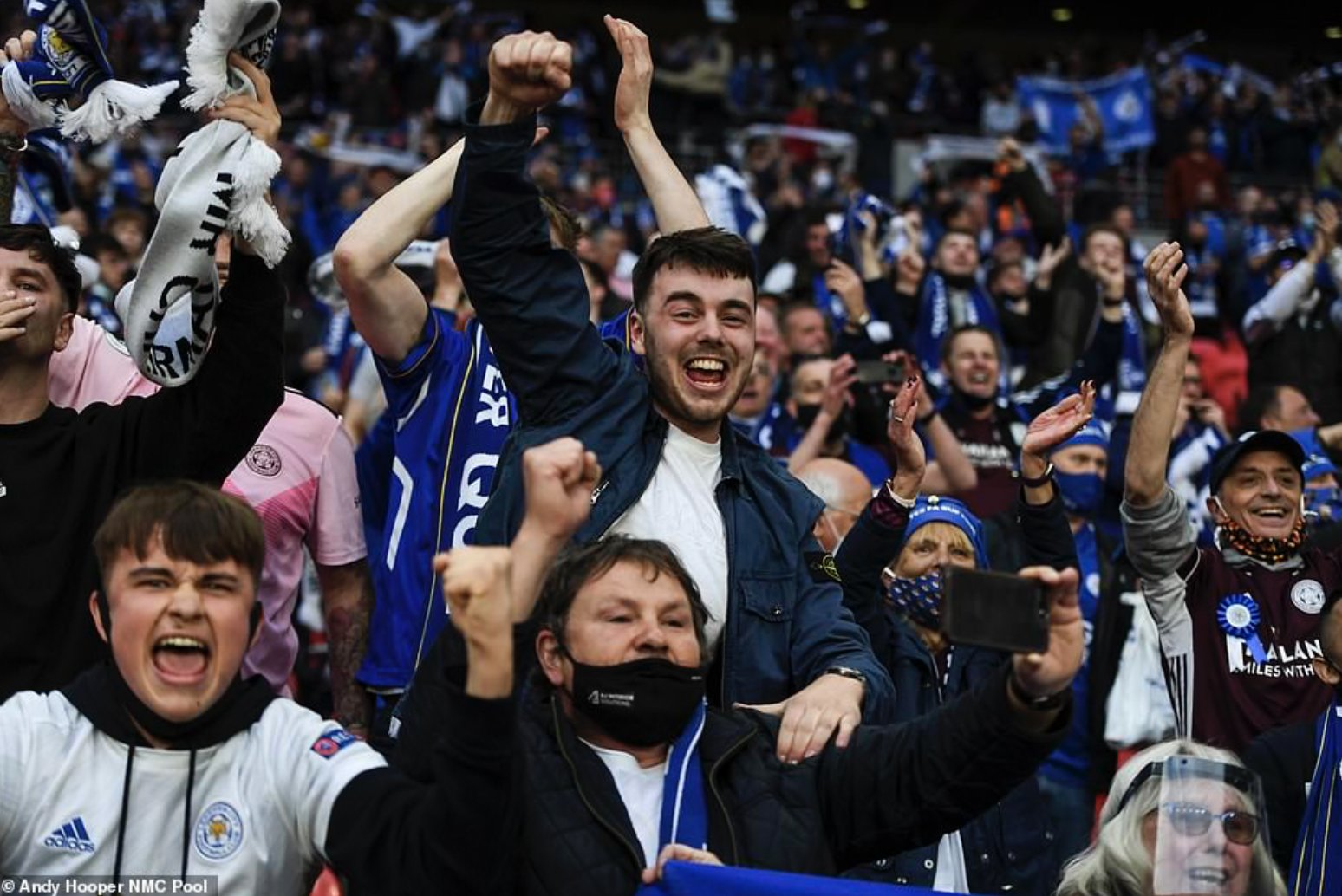 The U.K.’s biggest crowd in more than a year celebrated the return of football on Saturday evening for the final of the FA Cup – but Wembley Stadium was still at less than a quarter of capacity. The MailOnline has the story.

Youri Tielemans struck the only goal of the game in the Foxes’ triumph over Chelsea, with the Club’s tearful owner dedicating the trophy to his father, Vichai Srivaddhanaprabha, who died in a helicopter crash in 2018.

The return of so many fans, however – meaning the national stadium was at nearly a quarter of capacity – was arguably the biggest winner on the day.

In what was the latest Government pilot event to trial life after lockdown, every supporter to walk through the turnstiles had to return a negative lateral flow test before settling down to watch the glamour tie.

Many wore facemasks throughout the game but thousands of delirious Leicester fans embraced each other at the final whistle, as they clinched their first ever FA Cup.

Outside their home ground, the King Power Stadium, hundreds more gathered to celebrate, waving flags and letting off flares.

While it provided hope for many as a glimpse of a return to normality, ministers today called for caution, with the Culture Secretary admitting the U.K. is entering a “period of heightened vigilance”, with the Indian variant threatening the return of live events.

Oliver Dowden said the Government will continue to assess the spread of the variant in the coming weeks and update venues on their reopening.

Limited audiences will be allowed back into theatres, music venues and sports stadiums from Monday as part of the third stage of Boris Johnson’s “roadmap” out of lockdown.

Step four – planned for June 21st – would see social distancing end and many venues able to stage shows to a full house for the first time since the start of the pandemic.

But Government scientists revealed in minutes released on Friday night that the “highly transmissible” Indian variant could be 50% more infectious than the Kent strain – which models project could lead to 1,000 deaths a day, as well as 10,000 daily hospitalisations, by the summer.

And while the Prime Minister is pinning his hopes of beating the virus on a “flexed” jab drive, experts fear vaccinations are not the key to slowing the spread.

Given the Government’s pessimistic outlook, there is no doubt that we will have to wait much longer for events such as these to return to normal. The Government is said to have already told football’s UEFA that crowd sizes at upcoming events will be limited to 45,000.

When Will the Evidence From Florida and Texas Break Through the SAGE Groupthink?