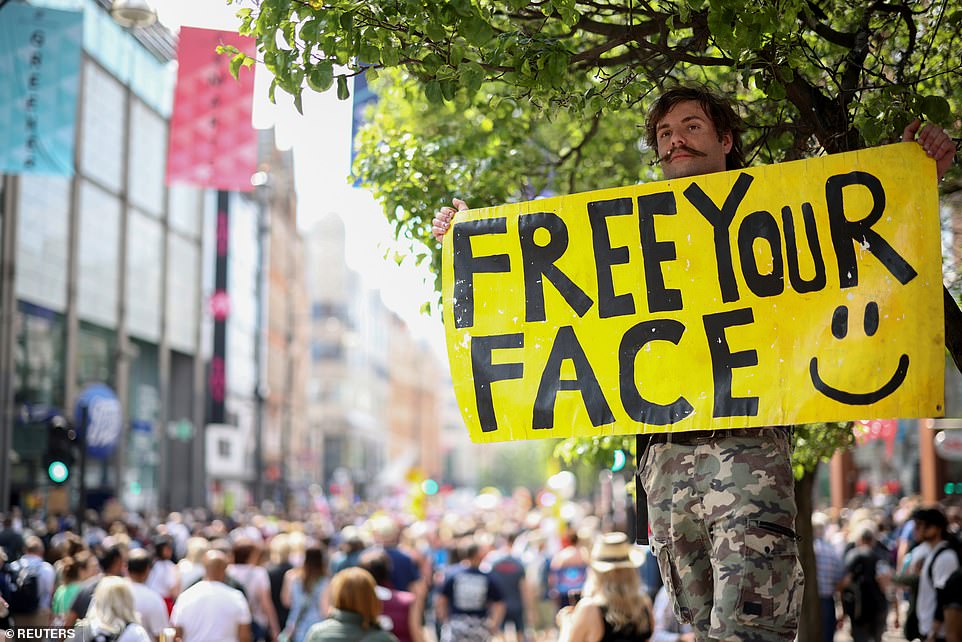 Unlike the last anti-lockdown protest, Saturday’s Unite for Freedom rally has actually received some media coverage. This has, of course, focussed on anti-vaxxers and conspiracy theorists. Protesters held signs reading: “My body, my choice”, “we do not consent” and “you have no power over us”. The Met, concerned also about a protest against the Police, Crime, Sentencing and Courts Bill taking place at the same time, “urged people to comply with the restrictions that apply to large gatherings”.

The MailOnline has more (although it smeared the protestors as anti-vaxxers and conspiracy theorists in its headline).

[Those gathered] protested [in part] against the idea of vaccine passports.

It is thought many of the crowd travelled from outside of the capital to take part in the gathering.

Several people set off smoke bombs and one launched a firework.

One man, who did not give his name, told the PA news agency he had come to the capital “because I want to be free and I want you to be free and the Government are lying to us”.

Another said she had attended because the press “are lying to us”.

By lunchtime, the crowd had started to disperse and head to Whitehall, with some heading to Trafalgar Square.

Stop Press: The Guardian actually ran a fairly balanced report about the occupation of Westfield by the protestors. The march, which began in Parliament Square, snaked all the way to Shepherd’s Bush and beyond to Acton.

Hundreds of anti-vaccine passport protesters invaded the Westfield shopping centre in Shepherd’s Bush on Saturday evening at the culmination of a mass march that drew many thousands and snaked miles through central and west London.

There were tussles with police who tried to block access through one entrance to the shopping centre at about 6pm, before protesters quickly realised that another door just yards away was unguarded.

Hundreds made it into the shopping centre where they stayed for about half an hour chanting “no more lockdowns” and “take your freedom back” before they were cleared by police with batons drawn, although without scenes of violence. 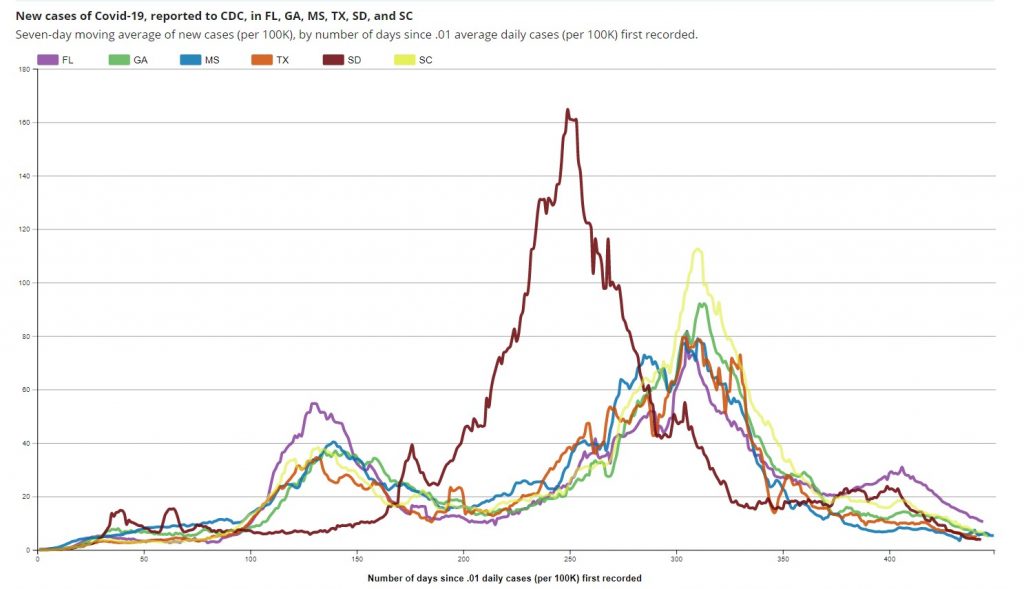 Government advisers in the U.K. have been out in force in the past week stressing that the unlocking of society will be a “gradual process” (even more gradual than taking four months?) and that face masks and working-from-home may stay after June 21st.

You can certainly see the need for this extreme level of caution. If you look at the states in America that have lifted restrictions then they have suffered extraordinary levels of infection and deaths and are really regretting their “Neanderthal thinking” and quickly getting back to normal. Oh, er, hang on, that’s right – there’s been no new surge at all.

I put this point to a lockdown fanatic friend (yes, we are still on speaking terms) and his response was a feeble “you can’t assume the virus will behave the same in different countries”. Right, well that’s handy, isn’t it? We can’t learn lessons from what happens elsewhere because every country is different. American states might have been able to re-open without suffering hospital overload or mass death (Texas reopened in full at the start of March), but that doesn’t mean we won’t. Better safe than sorry, eh? Happily, lockdown has no downsides so there’s no problem with just carrying on with it indefinitely, just in case…

Another friend, whose father lives in Texas, said his father told him this week: “No one is talking about Covid here. It’s over, life is normal.”

There could of course be another surge of Covid in re-opened states and countries, especially in the autumn or winter. But since Florida and South Dakota (among other states) were open throughout last autumn and winter, we also know there’s nothing to fear about that either, even less so now so many in the population are vaccinated.

But since when did our political leaders and their “scientific” advisers let evidence get in the way of a good lockdown, especially if it preserves for a little longer their reputation, status and power? 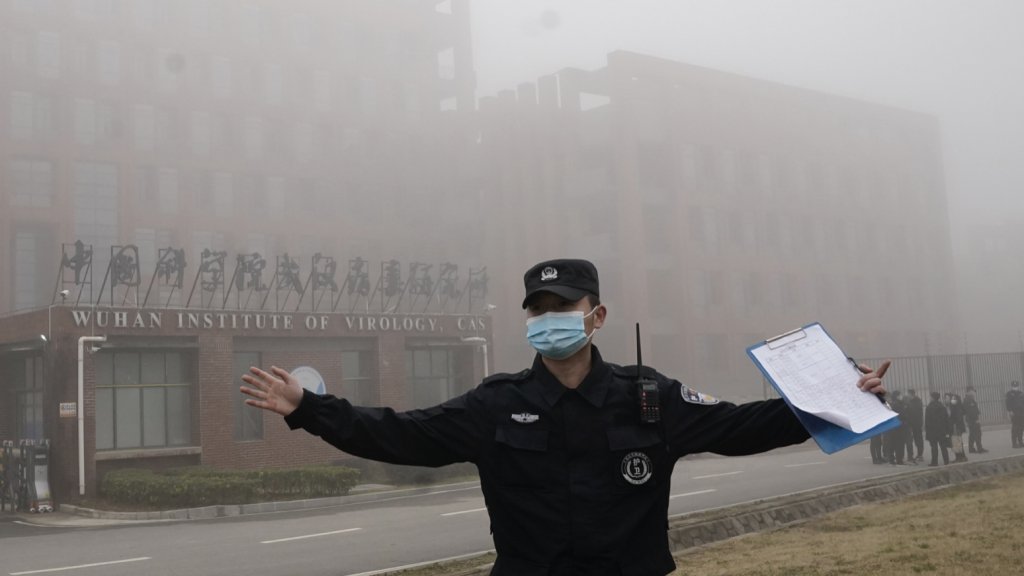 It is “beyond reasonable doubt” that SARS-CoV-2 was created through “laboratory manipulation”, according to a new study. The paper claims that the virus was made in a Wuhan lab by Chinese scientists who then tried to cover their tracks by retro-engineering versions of the virus to make it look like it evolved naturally from bats. The authors’ study has been rejected by a number of academic publishers but is now set to be published in the scientific journal Quarterly Review of Biophysics Discovery in the coming days. The MailOnline has the story.

The paper’s authors, British Professor Angus Dalgleish and Norwegian scientist Dr Birger Sørensen, wrote that they have had “prima facie evidence of retro-engineering in China” for a year – but were ignored by academics and major journals.

Dalgleish is a Professor of Oncology at St George’s University, London, and is best known for his breakthrough in creating the first working “HIV vaccine”, to treat diagnosed patients and allow them to go off medication for months.

Sørensen, a virologist, is Chair of pharmaceutical company, Immunor, which developed a coronavirus vaccine candidate called Biovacc-19. Dalgleish also has share options in the firm.

The shocking allegations in the study include accusations of “deliberate destruction, concealment or contamination of data” at Chinese labs, and it notes the silencing and disappearance of scientists in the communist country who spoke out…

While analysing Covid samples last year in an attempt to create a vaccine, Dalgleish and Sørensen discovered “unique fingerprints” in the virus that they say could only have arisen from manipulation in a laboratory…

Even when former MI6 Chief Sir Richard Dearlove spoke out publicly saying the scientists’ theory should be investigated, the idea was dismissed as “fake news”…

Digging through archives of journals and databases [on experiments done at the Wuhan lab between 2002 and 2019], Dalgleish and Sørensen pieced together how Chinese scientists, some working in concert with American universities, allegedly built the tools to create the coronavirus.

Much of the work was centred around controversial “Gain of Function” research – temporarily outlawed in the U.S. under the Obama administration.

Gain of Function involves tweaking naturally occurring viruses to make them more infectious so that they can replicate in human cells in a lab, allowing the virus’s potential effect on humans to be studied and better understood.

Dalgleish and Sørensen claim that scientists working on Gain of Function projects took a natural coronavirus “backbone” found in Chinese cave bats and spliced onto it a new “spike”, turning it into the deadly and highly transmissible SARS-CoV-2.

One tell-tale sign of alleged manipulation the two men highlighted was a row of four amino acids they found on the SARS-CoV-2 spike.

In an exclusive interview with DailyMail.com, Sørensen said the amino acids all have a positive charge, which cause the virus to tightly cling to the negatively charged parts of human cells like a magnet, and so become more infectious.

But because, like magnets, the positively charged amino acids repel each other, it is rare to find even three in a row in naturally occurring organisms, while four in a row is “extremely unlikely”, the scientist said.

“The laws of physics mean that you cannot have four positively charged amino acids in a row. The only way you can get this is if you artificially manufacture it,” Dalgleish told DailyMail.com. 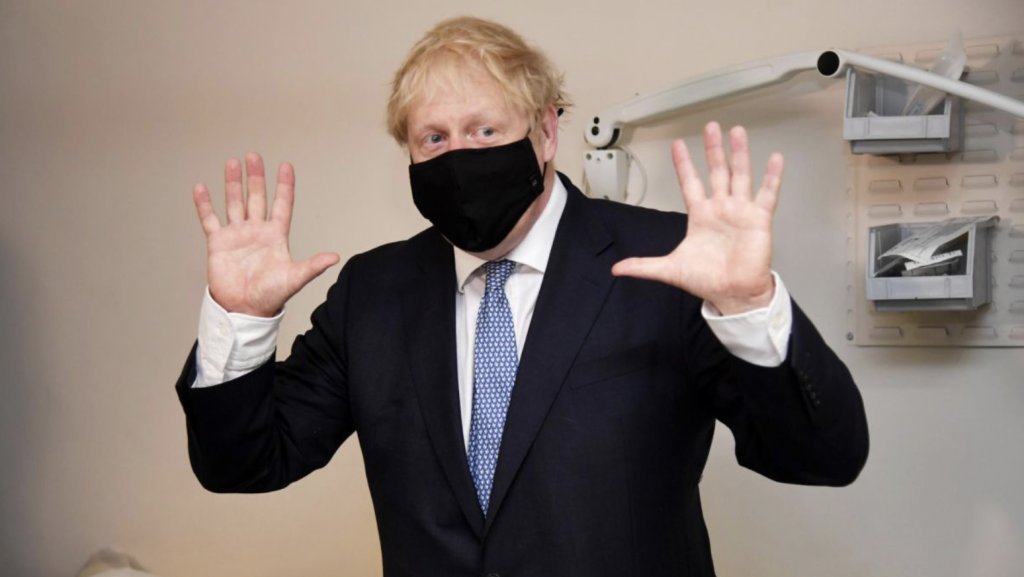 Professor Anthony Harnden, the Deputy Chair of the Joint Committee on Vaccination and Immunisation (JCVI), says that the unlocking of society will be a “gradual process” requiring a “cautious” approach – even if the June 21st date for the end of lockdown is met. He told BBC Breakfast (as quoted in WalesOnline):

Even if we do un-lockdown, if you are in a vulnerable position, particularly if you’ve not been vaccinated, you do need to carry on being cautious, even if the June 21st date goes ahead.

So I think we’ve all got used to living within boundaries at the moment and I think it’s not an all or none, I think it will be a gradual process even if the June 21st date goes ahead.

According to the Times, the Government is prioritising ending social distancing guidelines, but will likely leave guidance around masking and working from home in place.

The Treasury is prioritising the end of the “one metre plus” distancing rule and the “rule of six” indoors, which is viewed as crucial to supporting hospitality and retail and helping the economy to recover. Ministers also want to end rules that limit mass gatherings so that festivals, concerts and sporting events can go ahead…

In an attempt to reduce the spread of the virus, masks could still be required on public transport and in indoor public spaces. Guidance stating that people must work from home if they can may also remain in place. Boris Johnson is expected to make a decision on which restrictions can be lifted within the next fortnight.

For some Government advisers, even unlocking partially on June 21st would be going too far. According to SAGE member Professor Andrew Hayward, there is a “good argument” for delaying the end of lockdown until a “much higher proportion” of the population has been fully vaccinated (a sentiment recently echoed by Health Secretary Matt Hancock).

He told Today on BBC Radio 4: “It’s still going to be a few weeks yet until we’ve got all of the highly clinically vulnerable double-vaccinated and that will probably coincide with the plans to open up more fully. When we do open up more fully, instead of [cases of the Indian variant] doubling every week, it’s likely to double more frequently than that. I think there is a good argument for caution until we’ve got a much higher proportion double-vaccinated.” 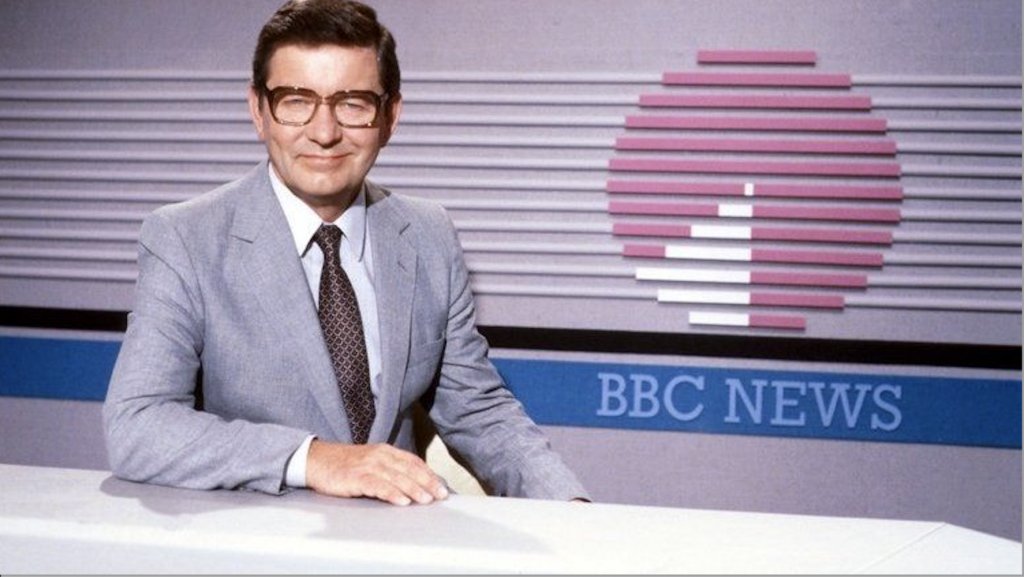 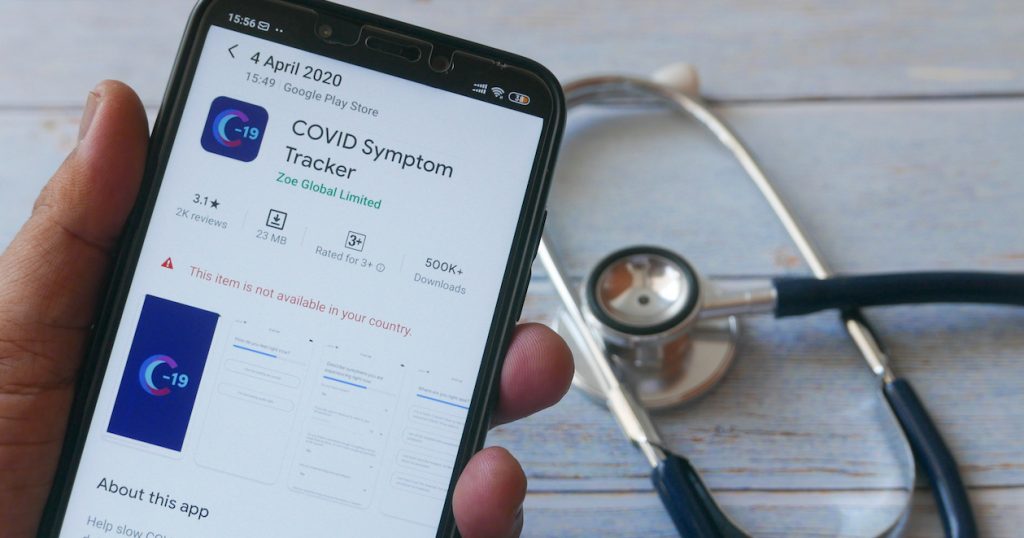 Professor Tim Spector, who leads the ZOE Covid Symptom Study, has done a new video update on vaccines, which is worth a watch. The team has also published a new study (not yet peer-reviewed) about the vaccines and their effect on symptomatic Covid.

The data is broadly encouraging in terms of efficacy. (They don’t address safety, though a previous study did. They also exclude the period immediately after each vaccine dose, so the study tells us nothing about any post-jab spike in infections, which is disappointing.)

One interesting finding is that sneezing becomes more common as a symptom of Covid infection after vaccination than beforehand, which the authors suggest could be a result of our immune system reaction changing. They note this could make the disease more infectious owing to the additional aerosols produced.

A concerning finding was that the elderly (over-60s) were up to three (2.78) times more likely to be infected after being vaccinated (with one dose of any vaccine) if they were frail than if they weren’t. This is unsurprising perhaps, but still indicative of considerably lower protection for those already at higher risk from the disease. Furthermore, a quarter of the vaccinated frail elderly in the study who contracted the virus ended up in hospital, which is not a small proportion (though no figure was given for the hospitalisation rate of unvaccinated frail elderly people against which to compare it).

Vaccine efficacy was also reduced in the obese, another high risk group, and those with an unhealthy diet – see charts below. The baselines are people who are also vaccinated and otherwise similar, but without the particular characteristic mentioned, e.g. the point in the top right shows the additional risk of infection that the vaccinated frail elderly have versus the vaccinated non-frail elderly.