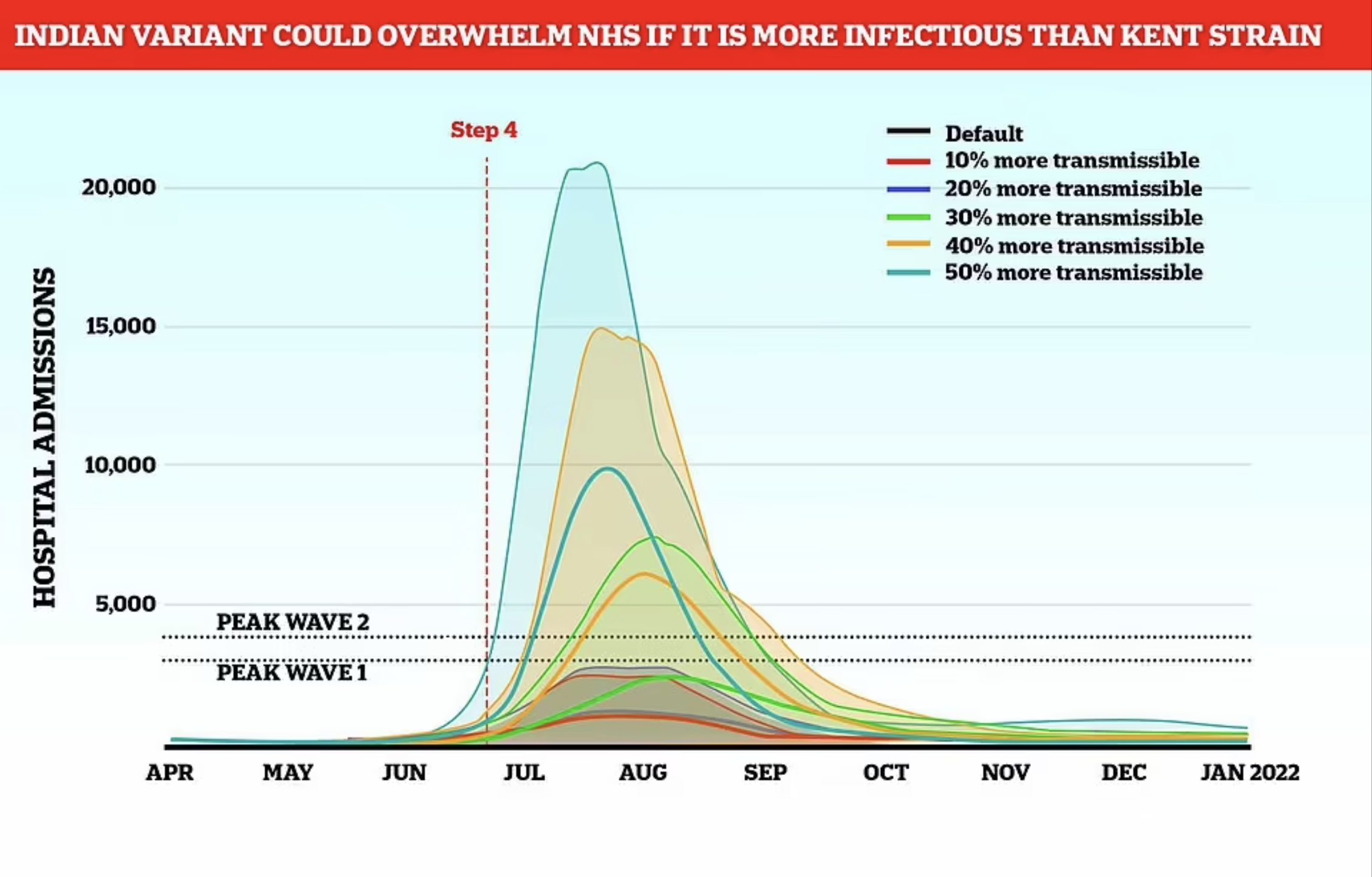 SAGE’s claim that the Indian variant could mean 10,000 hospital admissions a day in July assumes that between 30% and 60% of the U.K. population could become infected with the new variant in one week. Glen Bishop, the second year maths student at Nottingham who has buried himself in the epidemiological models SAGE is relying on, has looked at this latest scare story and concluded it is completely and utterly bonkers.

What makes it flat out insane is that the Warwick modelling team that came up with this projection have assumed that the vaccines are as effective against the Indian variant as they are agains the Kent variant – that is, 80% and 90% efficacy against severe illness and death for one and two doses respectively. The only variable they’ve changed to reach their conclusion is to increase the transmissibility. And yet, the team still thinks a plausible scenario – if the Indian variant is 50% more transmissible – is that 10,000 people could be admitted to hospital per day in mid-July if we proceed with steps three and four of the reopening. As Glen says, “Crazy how they got those numbers from their model and took it seriously!” Here’s an extract from his guest post:

To reach admissions three times the January peak, as the model projects, with a vaccinated population, this would mean that between three tenths and three fifths of the population would need to be infected – all in one week in mid-July – just to reach the central estimate projected. Then, the upper confidence interval, shaded in blue on the graph where hospitalisations reach 20,000 per day, would require between six fifths(!) and six tenths (120% and 60%) of the UK population, to be infected in one week. In other words, everybody in the UK would need to be infected and some twice, in one week in July, for the upper bound of Warwick’s projected doomsday scenario to be realised.

Clearly, to anyone who can do back-of-a-fag-packet calculations and type “ONS” into google, these projections are ridiculous and epidemiologically impossible. Yet there were 39 “scientific experts” attending SAGE meeting 89 at which these predictions were rubber stamped for the eyes of the Prime Minister. Is the groupthink so bad that none of them could do a few quick and simple calculations to verify the models were projecting things in the realm of what could be considered reasonable? Or do they not care? SPI-M are so attached to their modelling that they are not even testing it against basic numeracy to verify it.

Stop Press: Prof Lawrence Young, a virologist at Warwick, has told the Mail on Sunday he doesn’t think the Indian variant should delay reopening. “Any rise in hospitalisations and deaths we see won’t be anywhere near previous waves because we have the vaccines now,” he says. “While it is still spreading we have to be cautious, but I don’t think variants should stop us getting back to some sort of normality.”