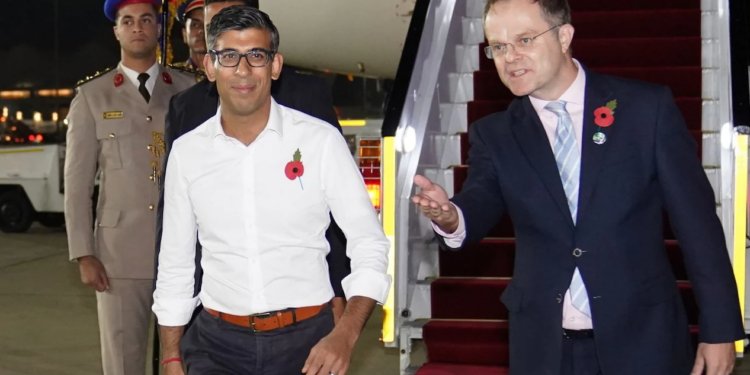 What fresh nonsense is this? Climate ‘reparations’ are coming, to compensate other countries for the ‘extreme weather’ they’ve been experiencing, which is allegedly our fault, because a model which has always been wrong said so. The U.K. has now backed the transparent scam. The Telegraph has more.

Britain has opened the door to paying climate change reparations to developing countries by supporting talks on the issue at the COP27 summit.

On Sunday, at the meeting in Egypt, U.K. negotiators backed a last-minute agreement to address “loss and damage” payments to countries badly affected by climate-related disasters.

Rishi Sunak will appear at the conference in Sharm el-Sheikh on Monday, where he will pledge £65.5 million for green technology in developing countries.

The Prime Minister will say: “By honouring the pledges we made in Glasgow, we can turn our struggle against climate change into a global mission for new jobs and clean growth. And we can bequeath our children a greener planet and a more prosperous future. That’s a legacy we could be proud of.”

Boris Johnson will also deliver a speech warning against the “naysayers” who threaten Net Zero targets.

Pakistan is leading a push by developing countries including Bangladesh and the Maldives for compensation from richer countries responsible for most of the world’s pollution.

The U.K. backed the issue being on the COP27 agenda during two days of negotiations ahead of the Egypt summit and is understood to accept that a deal must be done over the economic cost of climate change, which is forecast to reach $1 trillion by 2050.

The Prime Minister will come under pressure in Egypt to agree to a costly deal on reparations at the same time as he draws up plans for sweeping domestic tax rises and spending cuts.

On Sunday night, Treasury sources said Jeremy Hunt had signed off up to £35 billion in spending cuts and up to £25 billion in tax hikes to fill an estimated financial black hole of £60 billion.

Labour has backed calls for the U.K. to pay other countries affected by climate change, with Ed Miliband, the shadow climate minister, calling it a “moral responsibility”.

Alok Sharma, who held the COP presidency for the U.K., also called for “ambitious outcomes” on the issue of loss and damage. Disagreements over it threatened to derail the success of last year’s climate talks in Glasgow.

The Telegraph understands that the U.K. negotiating team accepts that the issue can no longer be kicked into the long grass. The British team are sympathetic to the position of developing countries that suffer from climate disasters, have not yet reached a position on whether, and how much, new funding needs to be committed.

Ross Clark in the Mail points out that, ludicrously, China is one of the countries demanding ‘reparations’, and that Labour climate spokesman Ed Miliband has committed a future Labour Government to making these payments in full.

Boris Johnson, on the other hand, has said the U.K. cannot afford climate ‘reparations’.

The United Kingdom was one of, if not the first, industrialised nation. The first wisps of carbon came out of the factories and mills and foundries of the West Midlands 200 years ago. We started it all. There’s no question that per capita the people of the U.K. have put a lot of carbon into the atmosphere. What we cannot do is make up for that in some kind of reparations. We simply do not have the financial resources. No country could. What we can do is help with the technology that can help to fix the problem.

Wrong premise obviously, but some fiscal realism at least that is lacking from the Sunak Government.