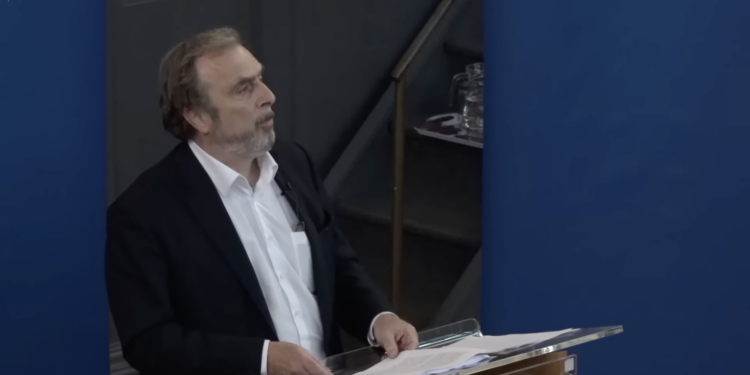 There are not many of ‘God’s Englishmen’ left. One of the greatest is Peter Hitchens, almost the sole defiant public figure of the early weeks of COVID-19. He has a doctrine, which one gradually learns, and then forgets, from one column to the next, and even from one conversation or lecture to the next. But it is a doctrine worth some written reflection.

What is Peter Hitchens’s doctrine?

I saw that Peter Hitchens had delivered a Roger Scruton Memorial Lecture in Oxford a few weeks ago; so listened to it, and then listened to him on the Irreverend podcast. The interesting thing about Hitchens, who has always deferred to Scruton as a philosopher, is that Scruton was so much less robust and resolute than Hitchens. Hitchens has some of the inner workings of an English constable, an English admiral and also an English saint – of the Becket type – whereas Scruton, alas, and this is why he has never particularly been a hero of mine, despite his many good qualities, seemed to shield himself from actual politics and religion with woolly higher culture on the one hand and the admirable quixotic intrepidity which got him involved in Eastern Europe on the other. There was slightly too much Kant and Wittgenstein and Descartes and Sartre about his writing. Now, there is something to be said for a Scrutonian sensibility, and one sees flashes of it in men like Noel Malcolm, Jonathan Sumption, Robert Tombs and David Abulafia, and even in Douglas Murray (a confusing figure who cannot decide if he wants to be the Roger Scruton or the Christopher Hitchens or the Ryan Gosling of our time), but it is a sensibility which does not dare always to be wrong by official, including high official, standards. Hitchens does dare. So he is in the highest class of heroes.

The doctrine is simple, but has several elements. One is about Britain, or, ultimately, England, and one is about Christianity. Let me try to put it in some order.

If I may summarise the above summary: first, Britain matters, and, if not Britain, England; then, Christianity matters – quite independently of Britain or England, but also, as a matter of fact, dependently, as a fact of Anglican civilisation. The falling away from Christianity is decisive for Hitchens; and has some relation to, and is dimly to be discerned behind, his far more pointillistically detailed paintings of our falling away from the old worthy secular Britain or England into our current tinselly despond.

There are gaps, or awkwardnesses, in the doctrine, I suppose. One is the current provocative suggestion that the young should leave Britain, now it is ruined. I take this to be Psmith-type persiflage, though Hitchen’s twelve-inch gunned manner is designed to make one doubt. Another is the British Empire. Anyone who argues that the First World War and Second World War were mistakes has to be something of an imperialist. But this is a great burden: a ‘white man’s burden’ that no one is willing to take on – how to justify or theorise the empire now. The empire is nowadays, as we know, taken to be a period piece. I suppose Hitchens would have to fall in with the Benjamin Disraeli’s and Niall Ferguson’s hypothesis that the empire of liberty (the only imperium based on libertas) was for that very reason the first self-liquidating empire. Though he could claim that decolonisation could have taken place on better terms – though what that would have meant for the world (a world without the World Wars, a world with a stronger British Empire) is not clear.

Getting back to contemporary matters, Hitchens said, in the Scruton lecture, that there is nothing to be done about the world: that he is in ‘inner exile’. This disconcerted Daniel Hannan, who in sharp viva voce examination manner tried to cross-talk Hitchens out of it. But there is nothing new in Hitchens’s ‘inner exile’. For a start, Maurice Cowling, another one of the last of God’s Englishmen, wrote in 1980 (in a book, Religion and Public Doctrine in Modern England, which is one of the greatest works in the high English literature of the last century) that the only possible position to adopt in the face of the contemporary world was a ‘Jacobitism of the mind’ which would protest its conviction that the ‘modern mind is corrupt’.

Hitchens, who began as a Jacobin, is now an open Jacobite. But it is not only the last half century in which we have seen this sort of Jacobite attitude arising about our world. The earliest Christians declared that they were xenoi, strangers or foreigners or exiles, in this world: and this word is in the Bible, suggesting that even the apostles were aware that the old Greek or Roman idea of the ‘citizen’ did not apply to them. Tertullian said something similar. So did Augustine in the City of God, that masterwork of the Middle Ages. Everyone lives on the ‘city of earth’, civitas terrena, but Christians seek to live in the ‘city of god’, civitas Dei, and so are ‘pilgrims’ in this life, on this earth, in this world.

The black pill is not, therefore, despite appearances, a counsel of despair. It is not giving up on the world, at least not in Hitchens’s Christian version of it. This is because he is stating it loudly, in stentorian voice: the world is corrupt. This is not an abandonment of the world. It is, on the contrary, prophetic. It is the sort of thing engaged in by Jeremiah (who was thrown into a sewer for his pains), and Gildas, and Milton, and Keble – and Orwell, for that matter. And prophecy is an act in the world. It is work in the world: and, as such, it is, sometimes, working works (to use a New Testament turn of phrase) on behalf of the truth. Even giving up on the world is, when declared to the world, an act of stern chastisement: and, I think, and I am sure I am not alone in thinking, that this is something the world needs to hear.

Britain might be ruined. But saying that there is nothing to be done about it is to do something about it.

Dr. James Alexander is a Professor in the Department of Political Science at Bilkent University in Turkey.