Is the Global Food Crisis All it’s Cracked Up to Be? 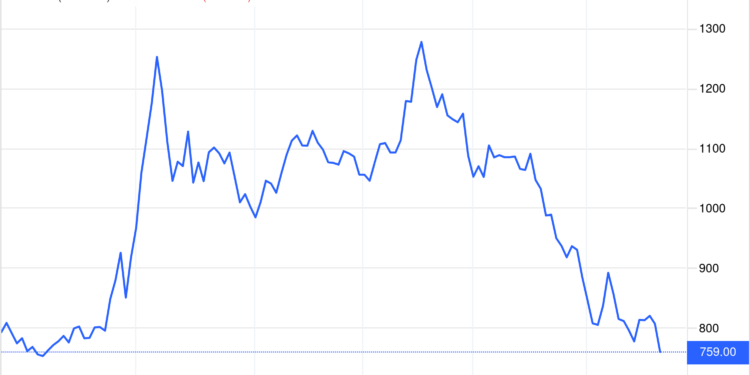 Another day, another international agreement broken by Russia.

Ukraine was pressured by the West to sign this worthless piece of paper because of the “global food crisis” – which was never anything more than another mass panic, to which Western politicians seem particularly susceptible these days.

I got fooled by this supposed crisis because – just like everyone else – I initially believed what I was being told. But one look at the above chart of the price of wheat and the penny dropped.

On January 24th, one month before the full-scale Russian invasion, wheat futures opened at $802 per 100 bushels. They peaked at $1,342 in early March, but from the middle of May there was a steady and steep decline, and on July 6th (before any hint of a “grain deal” was announced) the price dropped to $787 – back to pre-invasion levels. In other words, the markets got spooked, and have now recovered their senses.

But why aren’t the markets concerned about a crisis? Isn’t it the case that Ukraine produces a large amount of the world’s wheat? Not really. The U.S. Department of Agriculture tells us that Ukrainian wheat production is only 3% of the global total (and I don’t recall that figure being reported in the media). However, due to the geography of the country – with a lot of flat arable land and a climate well-suited to wheat production – they have big surpluses, so they export relatively more than other countries. The figure of 25% of global wheat exports (counting Russia and Ukraine) was therefore not inaccurate, but it seems to have prompted many people to conclude that we somehow had to find a huge amount of extra wheat all of a sudden.

However, in reality we don’t have to suddenly increase world production of wheat by 25% – or anything like it. The actual amount of replacement wheat production would only need to be about 10 million tons, or roughly 1% of world production. But given that the spring wheat crop was planted after the full-scale invasion, when farmers planted more than usual due to the expected demand (as seen in the wheat futures price at the time), there has already been time to adjust. Nevertheless, India has had some problems with production of the spring wheat (after a good winter wheat harvest), and parts of the EU haven’t had a good year.

Thus, the harvest this year will be watched with some interest, but the USDA betrayed no hint of panic when they summarised the situation on July 12th:

Essentially, there will be about 0.1% less wheat than last year, but global exports will actually increase by 0.4%. Even the BBC, while trying to sound as pessimistic as possible, can’t conclude anything worse than that there will be higher-than-usual wheat prices that might hit low-income countries.

In the Middle East and North Africa, where many countries import a lot of Ukrainian wheat, they will have to find other suppliers on the global market – which they’ve already had months to do so. But even Egypt, with the largest dependence on Russian and Ukrainian grain, was only importing 10% of their wheat from Ukraine, and it looks like they’ll still be able to import from Russia. Not to mention the fact that they claimed in February to have nine months’ supply stockpiled. And it’s not as though Ukraine has ceased its exports.

At the risk of drawing a comparison to Marie Antoinette, add to all this the fact that it’s not as though the population of Egypt – or of Bangladesh, for instance – are somehow incapable of eating anything but wheat-based products. The only real issue is the price – so perhaps we’ll see more trade in other foodstuffs, as consumer demand for wheat drops.

But none of this has stopped many, including Liz Truss and the former Supreme Allied Commander Europe James Stavridis, from calling for NATO to escort Ukrainian grain convoys in the Black Sea – creating a serious risk of a deliberate or accidental confrontation with Russian naval or air assets, which could escalate to nuclear war. On the other side, the previously-sensible Jordan Peterson has urged Ukrainian capitulation to Russia based partly on a prediction of “millions” dying from starvation.

I think it’s time for a rational re-appraisal of the facts. Let’s call off the mass-starvation panic.

GPs to Be Told to Give Gender Change Drugs on Demand