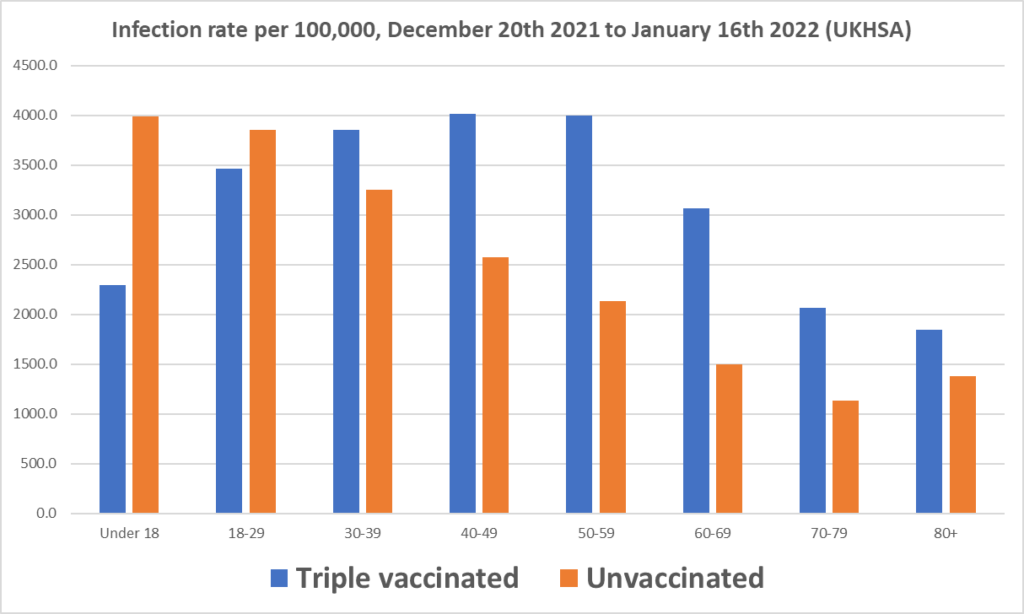 This week’s UKHSA vaccine surveillance report has landed – and this week a change. In the (in)famous Table 12, which shows rates of infections, deaths and hospitalisations per 100,000 by vaccination status, the data have suddenly switched to giving rates for triple-jabbed rather than two-or-more doses, meaning we no longer have continuity with our previous data. So sudden was the change in fact, that the report itself has not kept up with it, and the notes under the table still say the rates are for “people who have received either two doses of a COVID-19 vaccine or in people who have not received a COVID-19 vaccine”.

The change means we have to start over in our week-by-week comparisons, so the infection rates by age for this period are depicted above and the unadjusted vaccine effectiveness figures are depicted below.

Below is how the total reported infections for the period break down by vaccination status (in this chart vaccinated means one or more doses). While the chart doesn’t take into account the different numbers of people vaccinated and unvaccinated, with over 70% of infections in the vaccinated it does show that the outbreak is predominantly in vaccinated people.

Below is what our previous chart would look like if we just added the new data in, but the trend in the past week is obviously nonsense as they’ve changed the parameters. Still, it gives an indication of the difference between the double and triple jabbed, and note that all but the under-30s are still negative (meaning higher infection rates in the vaccinated than unvaccinated), and the under-30s are still low. Also, the over-70s declined since last week anyway, despite the switch to triple-jabbed only. Makes you wonder what the data for two-or-more doses would have shown.

The negative effectiveness in the raw data here is being seen elsewhere, including in Scotland, Ontario and Iceland, and the UKHSA should be investigating this striking phenomenon properly by quantifying the potential confounders and producing adjusted estimates from the data.

Instead, the agency continues to insist, ludicrously, that “comparing case rates among vaccinated and unvaccinated populations should not be used to estimate vaccine effectiveness against COVID-19 infection”. (A new ‘fact check‘ from Full Fatuous has even appeared to hammer home the point again.) But that is an untenable position – of course vaccine effectiveness can be estimated by “comparing case rates among vaccinated and unvaccinated populations” – and as I noted in a post earlier, this is shown once more by the U.S. CDC, which has just published a report estimating hazard rates (an equivalent quantity to vaccine effectiveness) by doing just that. Furthermore, while the CDC study controlled for prior infection and adjusted for age, it deemed biases from other potential confounders to be “minimal”. This shows up the UKHSA’s excuses for what they are, and they should no longer be accepted.

For completeness, here are the charts for hospitalisations and deaths, though again the sharp rise this week is an artefact owing to switching to triple-jabbed only. The UKHSA report’s official estimate of vaccine effectiveness for the double-dosed against hospitalisation from Omicron after six months is 30-55%.

Stop Press: Eugyppius draws on the data from last week’s report to estimate the missing data from this week’s, and comes to a disturbing conclusion: that the two-dose-only group have much higher Covid death rates than the unvaccinated. This is disturbing as the report states that the high risk are prioritised for boosters, meaning the death rate in the remaining two-dose-only population should be biased low, not high.

The One Thing That Might Persuade Me to Get Jabbed