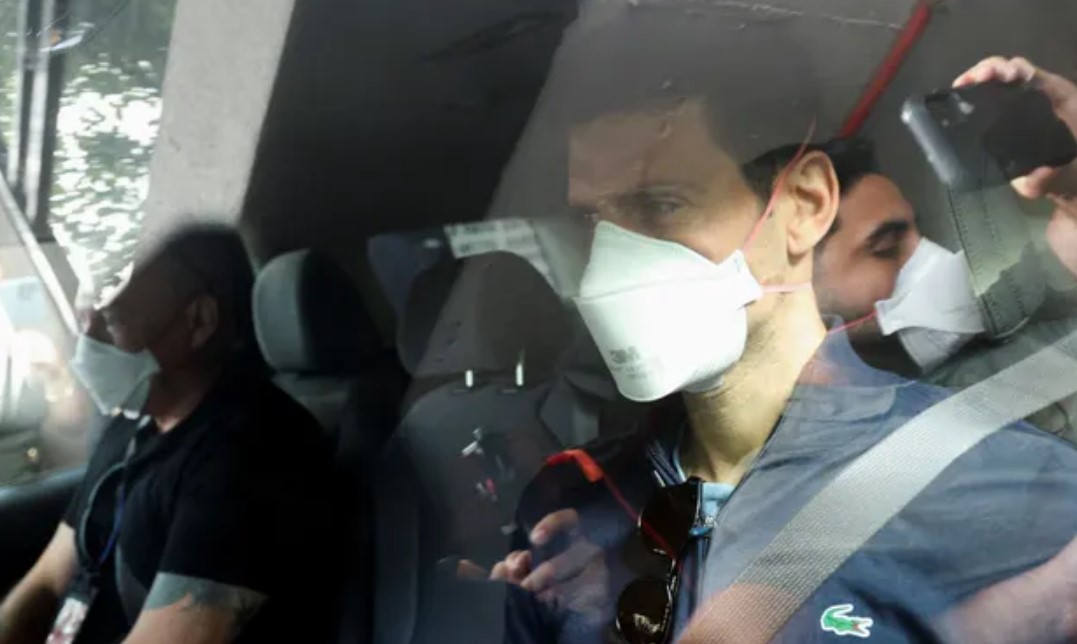 World No. 1 tennis player Novak Djokovic is to be deported from Australia following a court ruling upholding the cancellation of his visa by the Immigration Minister. The Telegraph has more.

Djokovic’s lawyers argued the Minister had provided no evidence the Serbian’s presence in the country may “foster anti-vaccination sentiment” when scrapping his visa.

In response, the Government highlighted Djokovic’s anti-vaccination stance and his “history of ignoring Covid safety measures”.

The world No. 1 spent Sunday in his lawyers’ offices, under the guard of two immigration officials, while the challenge was heard via video link.

After just over three hours of deliberations, the three judges decided unanimously to uphold the Immigration Minister’s right to cancel Djokovic’s visa.

Djokovic had the option of trying to take the legal fight further but said although he was “extremely disappointed” by the decision he would cooperate with the deportation.

The Immigration Minister Alex Hawke welcomed the unanimous ruling of the judges to uphold his decision “to cancel Mr Djokovic’s visa in the public interest”.

Australia’s strong border protection policies have kept us safe during the pandemic, resulting in one of the lowest death rates, strongest economic recoveries, and highest vaccination rates in the world. Strong border protection policies are also fundamental to safeguarding Australia’s social cohesion which continues to strengthen despite the pandemic.

Djokovic released a statement saying he was “extremely disappointed” with the court ruling.

I would like to make a brief statement to address the outcomes of today’s court hearing.

I will now be taking some time to rest and to recuperate, before making any further comments beyond this.

I am extremely disappointed with the court ruling to dismiss my application for judicial review of the minister’s decision to cancel my visa, which means I cannot stay in Australia and participate in the Australian Open.

I respect the court’s ruling and I will cooperate with the relevant authorities in relation to my departure from the country.

I am uncomfortable that the focus of the past weeks has been on me and I hope that we can all now focus on the game and tournament I love.

I would like to wish the players, tournament officials, staff, volunteers and fans all the best for the tournament.

Finally, I would like to thank my family, friends, team, supporters, fans and my fellow Serbians for your continued support. You have all been a great source of strength to me.

Before delivering the orders, Chief Justice Allsop explained that the case wasn’t about whether the Immigration Minister made the right decision but whether the decision was so irrational or unreasonable that it was unlawful. Given the scope of discretion given to the Minister under Australian law it would have been extraordinary if the court had overturned his decision. The court has now adjourned and will set out the reasons for its decision later.

The political backdrop in this once liberal and tolerant country was underlined by an opinion poll published by the Age newspaper on Sunday which showed almost three-quarters of Australians believed Djokovic should be sent home without playing in the Australian Open, while just 14% of the 1,607 people polled said he should be allowed to stay. The Government is likely to have an eye on the approaching election.

It is truly shocking that the country would deport the world’s No. 1 tennis player and defending champion over not being vaccinated. Worse, it has done so despite him coming to the country on the understanding that he has an exemption, and despite a court already overturning one attempted visa cancellation. Indeed, in making the latest cancellation the Government no longer claims Djokovic doesn’t have an exemption or a valid visa, but simply uses its prerogative to cancel the visa on what amounts to political grounds – that Djokovic’s presence may “foster anti-vaccination sentiment”. To back this up it pointed to his “history of ignoring Covid safety measures“, the relevance of which to fostering “anti-vaccination sentiment” is unclear. It is a naked political act for political reasons and no one is pretending otherwise.

Prime Minster Scott Morrison said: “It’s now time to get on with the Australian Open and get back to enjoying tennis over the summer.” But following deportation Djokovic faces the prospect of a three-year ban from entering Australia and difficulty entering other countries as well, unless exceptions are made. What appalling treatment of someone who should be an honoured guest and who only came to the country because he was assured he had a valid exemption. Fellow player Vasek Pospisil has said Djokovic only went to Australia on the understanding he could enter lawfully: “Novak would would never have gone to Australia if he had not been given an exemption to enter the country by the Government (which he did receive; hence Judge Kelly’s initial ruling)… There was a political agenda at play here with the elections coming up which couldn’t be more obvious. This is not his fault. He did not force his way into the country and did not ‘make his own rules’; he was ready to stay home.”

The Victorian Council for Civil Liberties has slammed the ruling and the system that allowed it, tweeting that it demonstrated Australia’s “dysfunctional and chaotic visa cancellation regime”.

The Minister has successfully used his ‘God powers’ to cancel Djokovic’s visa on the basis of how his perceived views might impact anti-vaxxers.

The court only looked at whether the Minister exercised his powers lawfully, and not at what the decision should have been.

The Djokovic saga highlights the use of these extraordinary personal powers and Australia’s dysfunctional and chaotic visa cancellation regime. Liberty Victoria joins the call for an inquiry into this unfit-for-purpose regime.

Disgraceful behaviour from a supposedly liberal and tolerant democracy. Australians should be utterly ashamed of themselves and their country and when they finally wake up from their lockdown-induced mass psychosis, perhaps they will be.

In Australia, the Clowns Are in Charge – And It’s No Laughing Matter