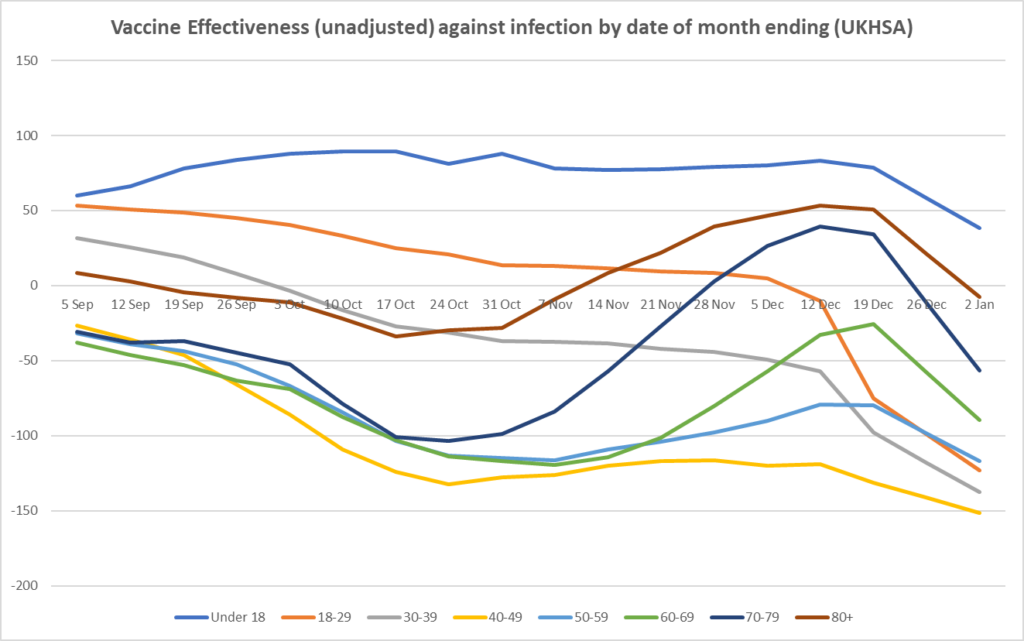 To underline the pointlessness of vaccine passports and mandates for preventing spread, I have plotted in the chart below the proportions of infections in the unvaccinated and vaccinated for the month ending January 2nd (in this chart ‘vaccinated’ includes all who have received at least one dose; in the other charts in this post ‘vaccinated’ means at least 14 days after a second dose). It shows that 72% or nearly three quarters of infections in that four-week period were in the vaccinated (65% in the double or triple vaccinated) and only 22% in the unvaccinated. That is certainly not an epidemic of the unvaccinated; almost the opposite, in fact.

Omicron has also had an impact on unadjusted vaccine effectiveness against hospitalisation, with sharp declines occurring particularly in the younger age groups with lower booster coverage. The decline in 18-29 year-olds is particularly steep, dropping to just 50%, meaning double vaccination is only halving the risk of hospitalisation (though keep in mind this is unadjusted vaccine effectiveness based on raw data, not taking into account any potential confounders in either direction).

Unadjusted vaccine effectiveness against death remains high, above 80% for all ages, though there is sign of a slight decline.