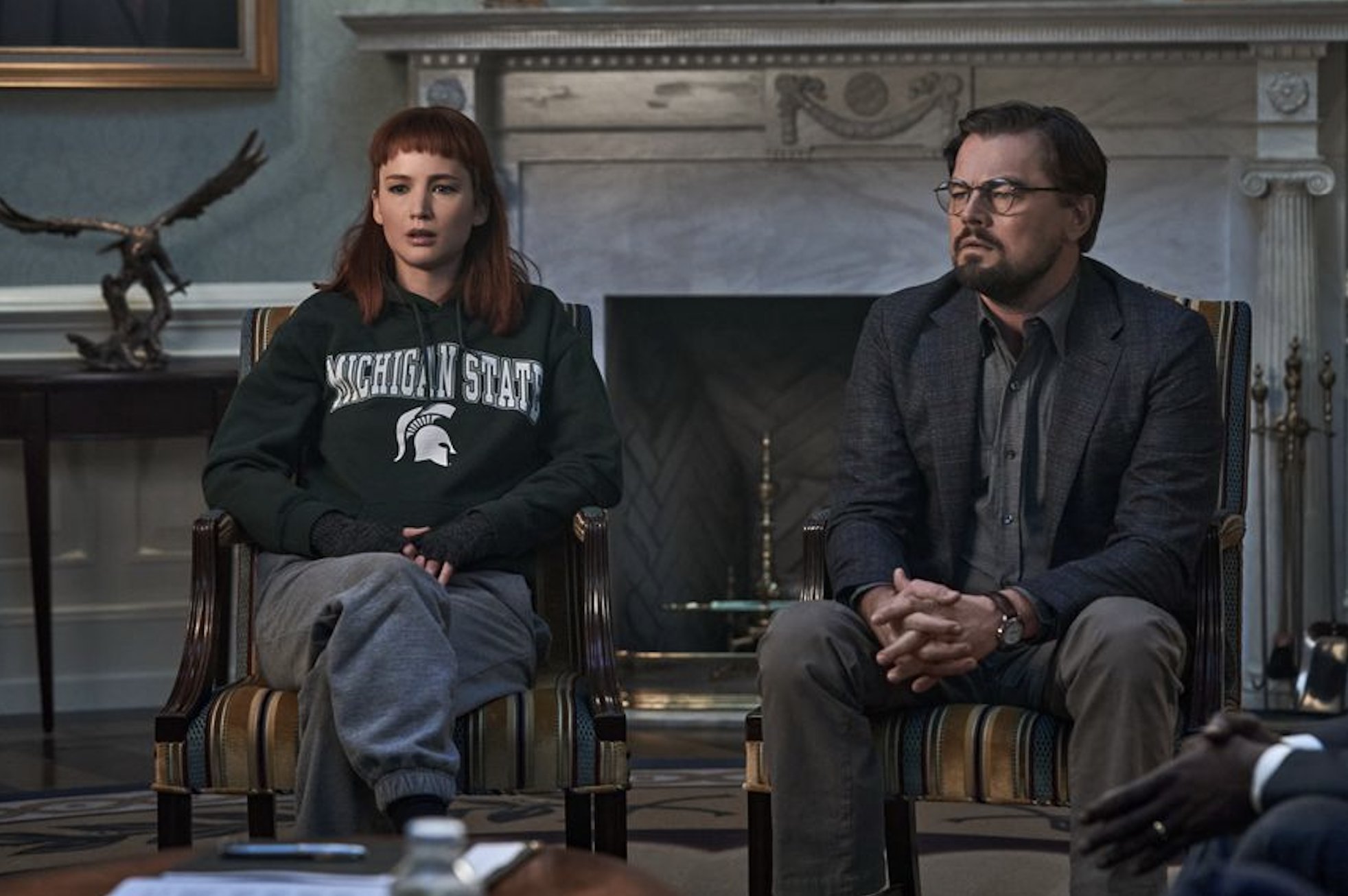 We’re publishing a guest post by freelance journalist Chris Morrison about the Neflix hit Don’t Look Up, an allegory about climate change denial starring Leonardo DiCaprio and Jennifer Lawrence. DiCaprio plays an astronomer whose PhD student – Lawrence – discovers a giant comet that’s on a collision course with earth. It’s due to hit in six months’ time and they try and warn an unsuspecting planet. But needless to say, the threat is laughed off by politicians and media moguls alike. The film’s twin targets are Covid denial and climate change denial and its somewhat implausible premise is that the world’s elites have become insufficiently hysterical about both.

Spoiler Alert – it is highly unlikely that a comet spotted hundreds of millions of miles away can be almost immediately calculated to be on a collision path with Earth. Plotting the orbit requires many observations while the effect of outgassing as the comet nears the sun will cause significant route deviations. But let’s not allow the facts to get in the way of Hollywood’s latest climate agitprop blockbuster. Don’t Look Up needs the planet killing certainty of a comet hitting Earth to whip up further green hysteria since, as is generally accepted by all correct thinking folks, we are all going to die in a planet killing climate fireball.

The film is an allegory for “climate change denial”. This is the insult thrown at those who seek to debate the “settled” science that holds the Earth’s global temperature will soar from around 15C to 21C in the near future if we continue to use fossil fuels. It is the work of heretics to note that no peer reviewed science paper exists to credibly prove the hypothesis beyond doubt. The temperature predictions are based on little more than the guesses from always wrong climate models.

Some scientists, no doubt operating from a particularly nasty part of Satan’s lair, actually believe the role of carbon dioxide has been greatly exaggerated and most climate change, as it always has been, is due to natural causes.

Emotion and hysteria are rapidly replacing scientific inquiry. As the co-founder of Greenpeace Paul Watson once famously remarked: “It doesn’t matter what is true, it only matters what people believe is true.”

During the course of Don’t Look Up, the two stars Leonardo DiCaprio and Jennifer Lawrence shake regularly with rage as their collision calculations are not taken seriously. Needless to say, the F bomb is dropped constantly because of course THEY REALLY F**KING CARE. Ariane Grande pops up to trill about the coming disaster because, well, she really fucking cares too.

Commenting on the film in the Guardian, Paul Kalmus said that as a climate scientist he is doing everything he can to wake people up to avoid “planetary destruction”. In his view it is “the most accurate film about society’s terrifying non-response to climate breakdown I’ve seen”. For people like Kalmus, the Earth is breaking down with “breath-taking speed”. Alas, the terrifying rise in global temperatures is taking a holiday at the moment – about 10 years at the last count – and global warming seems to be going the way of global cooling – the fashionable settled science scare du jour of the 1970s. No worries – global warming has become climate breakdown and bad weather rebranded as extreme climate events. Faced with an unusually warm summer‘s day, Kalmus demands we “switch into full-on emergency mode”.

If it wasn’t so serious, we could just laugh. But green activists have been so successful over the last 30 years with their “settled” science propaganda that they have persuaded a Conservative Government in the U.K. to embrace the Net Zero agenda. A Marxist-inspired, control and rule agenda complete with reduced mass personal transport, higher energy costs, restricted diets and all the loss of personal freedoms that these entail. The Covid pandemic has shown just how many freedoms can be snatched away in a modern connected society by the spread of widespread fear, fuelled by selective state-sponsored science and, of course, made up models.

Kalmus’s switch to full on emergency seems to have traction in many parts of society. Last year, the actress Joanna Lumley called for “wartime” rationing to combat climate change and suggested the masses did not weekend in Magaluf. There was no word on whether she intended to stop making travel documentaries. It is thought unlikely that she celebrated her recent Damehood with a dinner of tinned snook and a thin slice of bread and marg.

Slightly more terrifying than the thoughts of Her Lumliness is Angus Forbes, who wrote a recent book calling for a Global Planet Authority to have complete control over the biosphere. Mr. Forbes, the first director of Prince Charles’s Rainforest Project, suggested turning 40% of all land on Earth into parks, maintained as “ultra light zones” incurring “almost zero human pressure”. One of the first areas he suggests could become a national park is the entire island of Madagascar.

Princeton professor and IPCC lead author Michael Oppenheimer is also keen to stop low-income countries catching up with his own. “We can’t let other countries have the same number of cars, the amount of industrialisation, we have in the U.S. We have to stop these Third World countries right where they are,” he said.

At the beginning of this month, the Institute for Strategic Dialogue was reported to have said that as Covid begins to wane, “conspiracy theorists” are starting to use terms such as “Green lockdowns”. The left wing think tank stated that there was “no evidence” that people would be forced to stay at home and restrict their travel and social contacts to reduce carbon emissions.

Meanwhile back in the real world, it is obvious that many green extremists are starting to think the unthinkable. Democracy is all very well but is falling short when decisions have to be made by self-proclaimed experts going about their important work of saving the planet. Writing in the American Political Science Review last month, Ross Mittiga, Assistant Professor at the Catholic University of Chile, noted that as the climate crisis deepens, “one can find a cautious but growing chorus of praise for ‘authoritarian environmentalism’”.

as those who have survived COVID-19 can attest, during a health emergency, severe and enduring limitations of rights to free movement, association, and speech can become legitimate techniques of government, even in robustly liberal democratic states. … herein lies the allure of authoritarian environmentalism; for if, as many now contend, liberal-democratic norms, principles, and institutions impede urgently needed climate action, then legitimacy may permit – or even require – relaxing or abandoning those constraints.

In his God Delusion book, Richard Dawkins demanded extraordinary proof for what he called the extraordinary claims of religion. He was unimpressed with the argument that the claims had all been “settled” by the teachings of the Bible. Many of the claims of the green movement are truly extraordinary and are often backed up with explanations that owe little to genuine science. Such science is done a disservice by the banning of discussion with those who dissent from prevailing orthodoxies, as is common in the mainstream media. Reason and debate are ignored and faith in an emerging ideology takes over.

To the victor the spoils, and a codifying law made by the Byzantine Emperor Justinian would be infamous for the next 1,500 years. Known as Law 1.11.10.2, it read: “Moreover we forbid the teaching of any doctrine by those who labour under the insanity of paganism so that they might not corrupt the souls of their disciples.”

The supreme irony of Don’t Look Up, of course, is that the alarmism the filmmakers think has been ignored has been enthusiastically embraced in nearly every country in the world. Our problem isn’t being too sceptical when faced with apocalyptic warnings. It’s being far too credulous.