The Evidence That Vaccine Passports Are Worse Than Useless 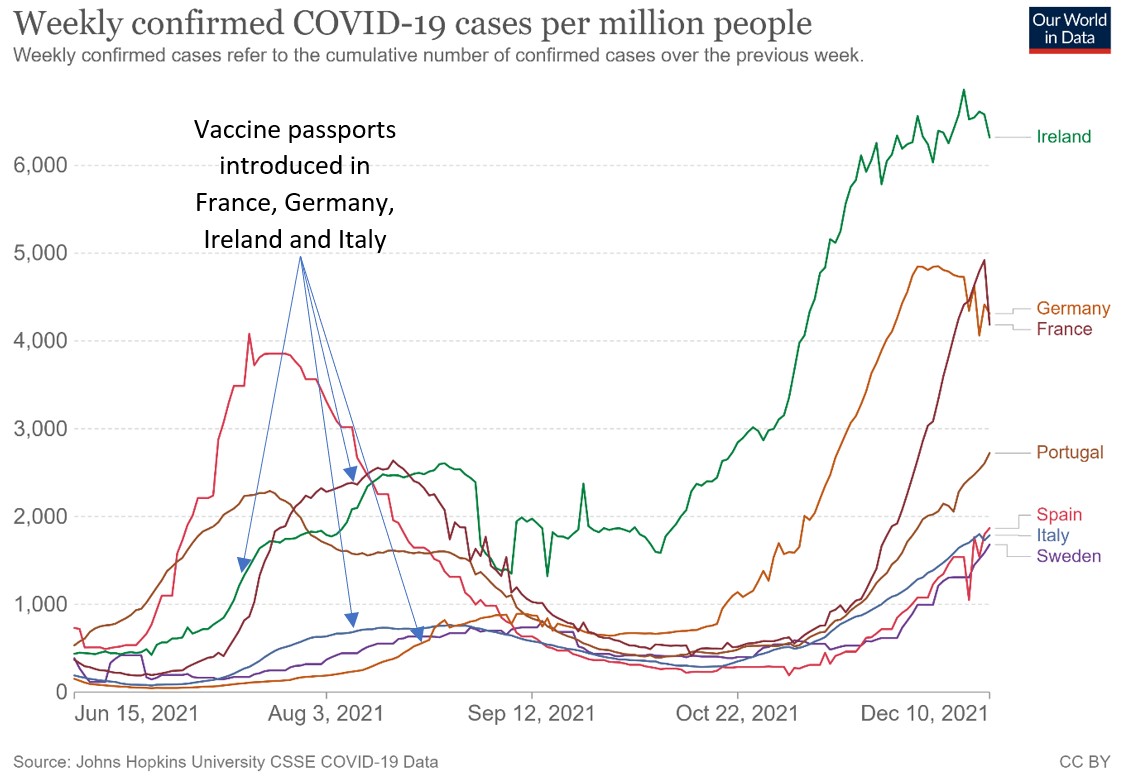 As the scale of the Commons rebellion over the Government’s imposition of ‘Plan B’ measures grows ahead of the vote on Tuesday, at the Daily Sceptic we thought we’d take a look at the evidence for vaccine passports.

Regrettably, the measures are likely to pass regardless of the size of rebellion owing to Labour support, but the number of rebels currently looks large enough to mean the Government will be relying on opposition votes – yet another sign of Boris Johnson’s weakness and the precariousness of his position.

The Government’s ‘Plan B’ measures include expanding the mask mandate to most indoor venues except hospitality and the reintroduction of guidance to work from home. But by far the most egregious aspect is the introduction of vaccine passports for nightclubs and larger venues, the first time these have been imposed in England. If the vote passes, the passports will be mandatory from Wednesday.

The Scottish Government last month published a report which supposedly backed up the case for continued use of vaccine passports north of the border, first introduced on October 1st. The Spectator‘s data journalist Michael Simmons went through it, however, and found its case paper-thin. It provided no evidence that vaccine passports increased vaccine uptake, stating: “The rate of overall increase in first and second doses, has been similar across four U.K. nations”. Indeed, following introduction of the passes, uptake in England actually outpaced that in Scotland among adults (passports did not apply to children), increasing 1.6% in England to Scotland’s 1.3%.

Simmons points out that according to the latest ONS data, as of November 15th, 95.3% of adults in England have antibodies to SARS-CoV-2, slightly higher than in Scotland where it’s 95%, despite the vaccine passes. It’s hard to see how these could get much higher, however draconian the vaccine coercion becomes.

The House of Commons Public Administration and Constitutional Affairs Committee released a report in June concluding there was “no justification for Covid passports”.

Several countries including France, Germany, Ireland and Italy have introduced vaccine passports for entry to venues such as nightclubs, restaurants and places with large crowds. Looking at the rates of reported infections in these countries since the passes were introduced (see above), and comparing them to Portugal, Spain and Sweden where vaccine passports are not mandated, there is no obvious impact visible. Indeed, the three countries with the worst rates are passport countries – though note that raw ‘case’ rates need to be treated with caution, e.g. the recent upward trend in Sweden is not present in the positive test rate, which has been largely flat for the past month. Nonetheless, a similar lack of impact can be seen in the positive test rates.

A comparison of ONS-estimated infection rates in England and in Wales, where vaccine passports were brought in on October 11th, shows a similar lack of impact. Indeed, the infection rate in Wales has been trending higher than in England over the period (though note the confidence intervals for Wales are wide).

This real-world evidence of lack of impact of vaccine passports on infection rates is not actually very surprising in light of the UKHSA raw data which shows infection rates higher in the vaccinated than the unvaccinated in many age groups, and the accumulating evidence that vaccines do not reduce viral load or transmission.

All-in-all there is no evidence that vaccine passports make any appreciable difference to the spread of COVID-19 that might justify even theoretically the costs they incur for businesses and the harms they inflict on the unvaccinated particularly, and also on the vaccinated who are deprived of the company or services of the unvaccinated. There is also no evidence they increase vaccination rates once vaccination is already at a high level. Yet they create a ‘papers please!’ society that discriminates and segregates people and particularly disadvantages ethnic minorities and the less affluent. So it’s all pain for no gain. So what’s the point?

Is there Any Evidence that the New Lockdown Measures will Work?