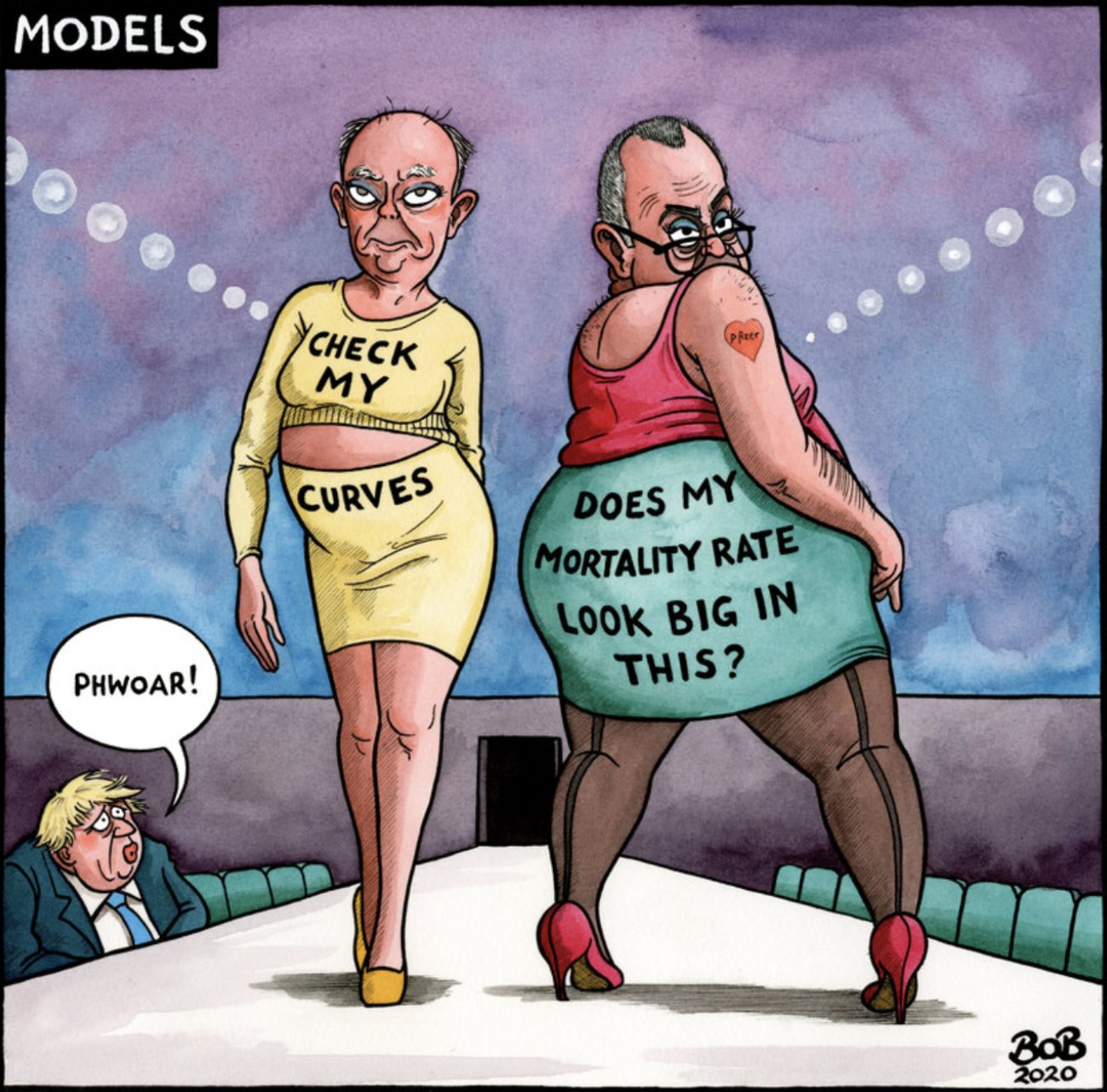 There follows a guest post from our in-house doctor, formerly a senior medic in the NHS, who draws attention to the errors made repeatedly by the modellers and government advisors and the huge implications of them.

Napoleon Bonaparte remarked that “history is the version of past events that people have decided to agree on”. When the official version of the pandemic is written, I wonder what analysis will be made of the role of statistical modellers and public health experts in driving Government policy over the last 18 months?

To inform this question it may be helpful to examine the recent evidence of how predictions have matched up to real events. For example, on September 8th, SPI-M-O (one of the multitudinous acronym salad bodies advising the Government), produced a paper entitled “Medium-term projections“.

These projections are not forecasts or predictions. They represent a scenario in which the trajectory of the epidemic continues to follow the trends that were seen in the data up to September 6th.

If that is the level of confidence the authors of the report have in their own abilities, one rather wonders what value this publication contains – yet this is the level of advice being given to decision-makers.

Firstly, to the “projection” of admissions. The document is in PDF format, so I am unable to reproduce it here, but the graphical representations show a 90% confidence interval fan chart for the period September 12th-28th. Hospital admissions in England are “projected” to be between 600 to 1,200 per day – a fairly wide spread. Graph One shows what actually happened – daily admissions on the blue bars, seven-day moving averages on the brown line.

It is clear that admissions have been consistently below the lower ‘projection’ for the entire period and the seven-day moving average at the end of the month was below 500 admissions per day.

For context, it is helpful to present that period of September alongside the data from earlier and later in the year in Graph Two.

So, having projected that hospital admissions would continue to rise, the real-world data shows that they in fact fell quite significantly over the period in question.

Earlier in the year, the influential modelling group at Imperial College produced a ‘projection’ for SAGE looking at the effects of lifting Covid restrictions on July 19th.

In this paper, they estimated that hospital admissions by mid-September would be between 2,500 per day (optimistic case) and 12,000 per day (pessimistic case). The real data shows the average figure to be around 700 admissions per day.

In line with these trends, the ICU Covid bed occupancy has also fallen – depicted in Graph Four.

On July 7th, SPI-M-O produced a report containing data from three modelling groups (Imperial, Warwick and LSTMH) in relation to ‘projections’ after lifting of Covid restrictions on July 19th.

The data is quite dense, but in summary, their most optimistic projections around admissions, hospital inpatient and ICU load and deaths were overestimates by at least a factor of two. Worst-case predictions were overestimates by up to 10 fold. Positive tests in the community were predicted to be over 100,000 per day by the end of September – the reality was around 35,000 and the ratio of hospital admissions to cases has been falling steadily from around 8% at the beginning of the year to around 2% now.

The point of my article today is not to poke fun at data modellers, most of whom are probably trying their best to be helpful. My intention is to observe that almost all ‘projections’ I have seen over the last year have shown a remarkable consistency in grossly overestimating the numbers of Covid hospital admissions – yet the modellers and governmental advisors do not appear to have adjusted their calculations in light of observable real events and keep making the same errors. This constant catastrophising has real-world implications – not just for civil liberties, but for cancer diagnosis, chronic disease management and not least the state of the economy, which pays for the Health Service.

We have a long tradition of politicising healthcare in this country, with a corresponding corrosive effect on sensible decision making. The Covid pandemic has taken the tendency a step further by politicising a specific individual pathogen. I fear we are about to compound the error by extending the precedent to all seasonal respiratory infections. Having crossed the Rubicon of national lockdowns, there now seems to be an appetite among senior Government advisors for repeating the mistake. Professor Ferguson, giving evidence last week to the Parliamentary Select Committee on Covid, referred to ‘Plan B’ – in relation to re-imposition of societal restrictions should Covid hospital admissions exceed a threshold of 1,200 per day. Professor Van Tam has warned the public about the possibility of a serious influenza outbreak this winter and attendant pressure on the NHS. Is this evidence of prudent governmental contingency planning or ‘pitch rolling’ for re-introduction of ‘non-pharmaceutical interventions’?

I close this piece with an observation from another significant historical figure – Winston Churchill – a journalist and author before he became Prime Minister. Churchill remarked that “history will be kind to me – for I intend to write it myself”.

It is known that our current Prime Minister is an admirer of Churchill. I wonder how that enquiry will turn out?