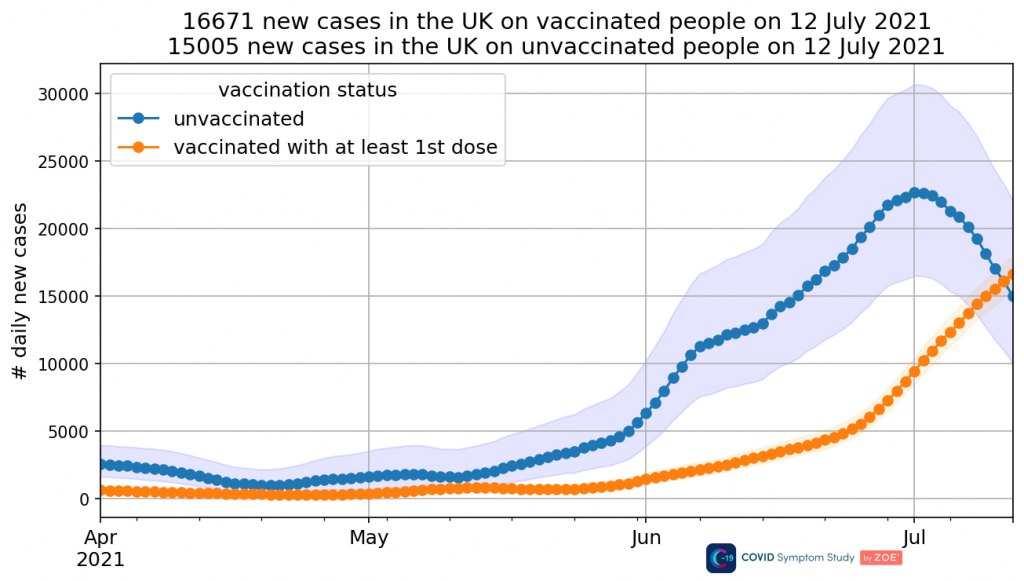 Health Secretary Sajid Javid has tested positive for SARS-CoV-2, despite being vaccinated – and he is far from alone. The latest ZOE data shows that, as of July 12th, infections in the vaccinated (with at least one dose) in the U.K. now outnumber those in the unvaccinated for the first time, as the former continue to surge while the latter plummet (see above). (Note that 68% of the population has had at least one vaccine dose, so there are still at this stage disproportionately more new infections in the unvaccinated, though on current trends that may soon change.)

At what point will the Government accept that these vaccines have limited efficacy in preventing infection and transmission, and thus the whole rationale of being vaccinated to protect others – vaccine passports, compulsory vaccination, and so on – is suspect?

The above graph was in yesterday’s report, so I downloaded today’s report (you can get it by signing up to the app and reporting your symptoms) to get the new update. I was dismayed to find the graph was gone. At the bottom, a note explains:

Removed incidence graph by vaccination status from the report as there are very few unvaccinated users in the infection survey, the Confidence Intervals are very wide and the trend for unvaccinated people is no longer representative.

Which I would say is very convenient, just as infections in the vaccinated became the majority. Perhaps ZOE should try to recruit some more unvaccinated people for its survey, so it can continue to report on this as well as have a control group for its vaccine data? That would seem the scientific thing to do, rather than just stop reporting it because it is suddenly “no longer representative”.

It’s doubly odd because Tim Spector, lead scientist on the ZOE app, made the decline among the unvaccinated a feature of his video this week. So the realisation that the trend is “no longer representative” appears to have been rather sudden, even invalidating the contents of a ZOE ‘data release‘ two days earlier.

It seems we will never know how the story ends, which is a shame and a missed opportunity for ZOE.

ZOE data continues to suggest the current Covid surge is peaking and possibly even beginning to decline in the U.K., at least outside England (see above). Yet this is at odds with the daily Covid reports from the Government, which show continued growth.

Why the discrepancy? Is it because the Government figures include all the lateral flow tests that schoolchildren are taking as they isolate? 839,100 children – 11.2% of the total pupil population, more than one in 10 – were absent from state schools for Covid-related reasons on July 8th. All of them will have been tested and this will be picking up asymptomatic or mild infections that would usually not be noticed. ZOE data is symptom based, with a confirmatory PCR test, so would not be affected by surges in lateral flow testing among schoolchildren picking up asymptomatic infections.

Whatever the explanation, one to watch.

Is it ‘Freedom Day’ Already?