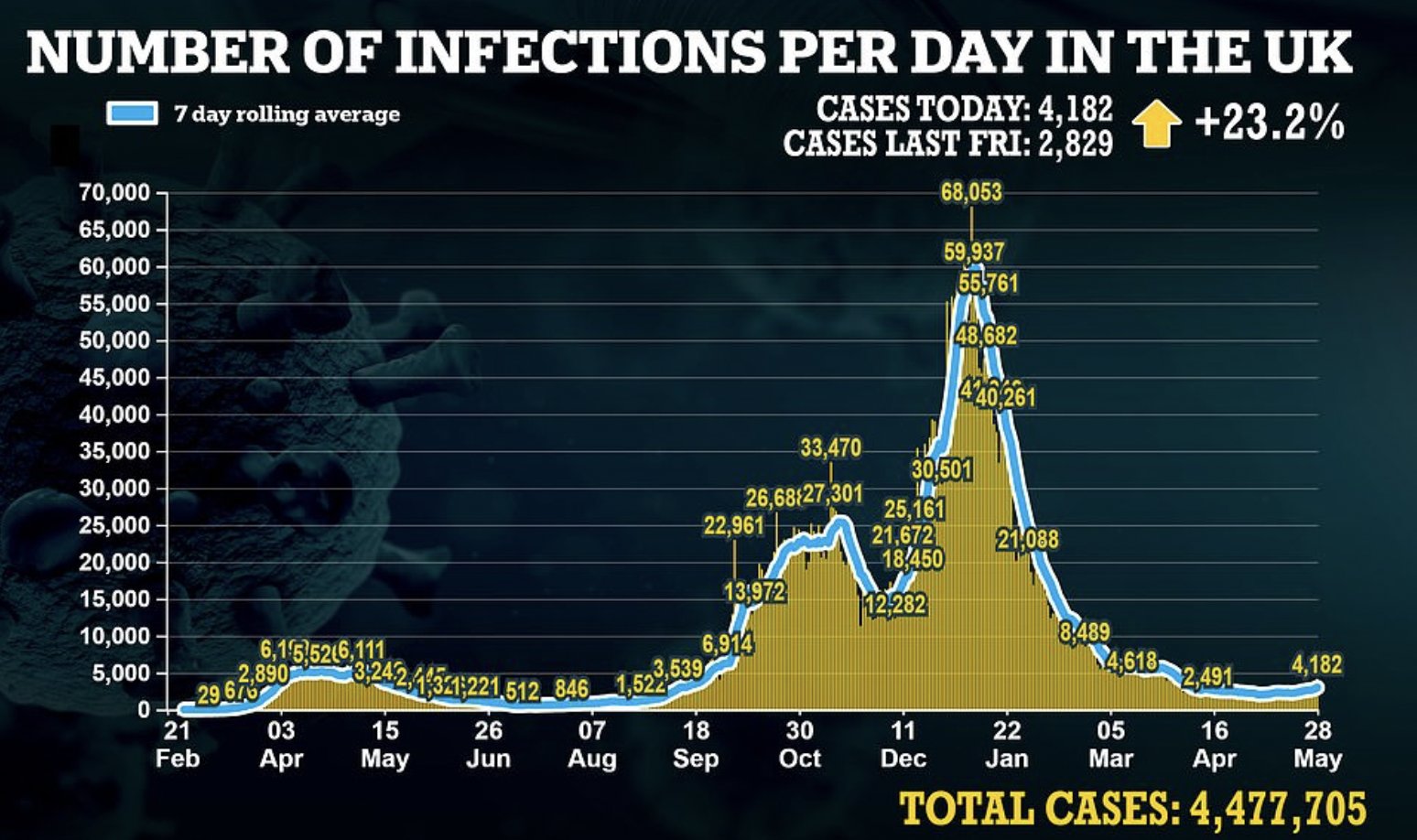 There was another rise in positive tests today, which passed 4,000 for the first time since April, but reported Covid deaths remained flat with just 10 victims. The MailOnline has the story.

Department of Health bosses posted another 4,182 positive tests, up by almost half on last Friday’s count. It is the most reported in a single day for nearly eight weeks, since the 4,479 on April 1st. Almost 75% of all new cases are now the Indian variant.

Ministers always expected cases to increase when restrictions were eased, and they believe vaccines will stop the NHS from being overwhelmed once again.

But Number 10 has refused to rule out delaying plans to relax lockdown on June 21st and will have to hit the panic button if hospitals start to suffer spiralling admissions, or the mutant strain is found to be much more infectious than the Kent variant, which triggered the devastating second wave.

Cautious scientists have called for Number 10 to delay the final step on the roadmap back to normality for at least two months, giving the NHS more time to fully vaccinate millions more adults. Analysis suggests a single dose of the jab is only around 33% effective at blocking symptoms of Covid in patients infected with the Indian variant, compared to about 50% for the once-dominant Kent strain.

Professor Andrew Hayward, a member of the New and Emerging Respiratory Virus Threats Advisory Group, said there was “a good argument for caution until such time as we’ve got a much higher proportion of the population double-vaccinated”.

Admissions have started to creep up across Britain, rising by 30% in a week to 134. Figures will get even higher over the next few weeks because of the lag between getting infected and becoming severely ill.

But hospital bosses in the worst-hit towns insist jabs have changed the game, with barely any infected patients who need medical care having been fully vaccinated.

The Health Secretary appears to agree with Professor Hayward that the vaccination of millions of Brits (including the most vulnerable) is not enough, having said on Thursday: “Our vaccination programme has reached 73% of the adult population, but that means that more than a quarter still haven’t been jabbed. 43% of adults have had both jabs, but that means that more than half are yet to get the fullest possible protection that two jabs give.” A number of SAGE members have joined (or, in fact, are leading) the calls for lockdown to be extended because of the Indian variant, despite the increase in positive Covid tests still not being matched by an increase in deaths.

More Than Half of Brits Have Not Hugged a Friend or Relative Since the Easing of Restrictions, New Polling Suggests