More than Half of Britons Now Immune 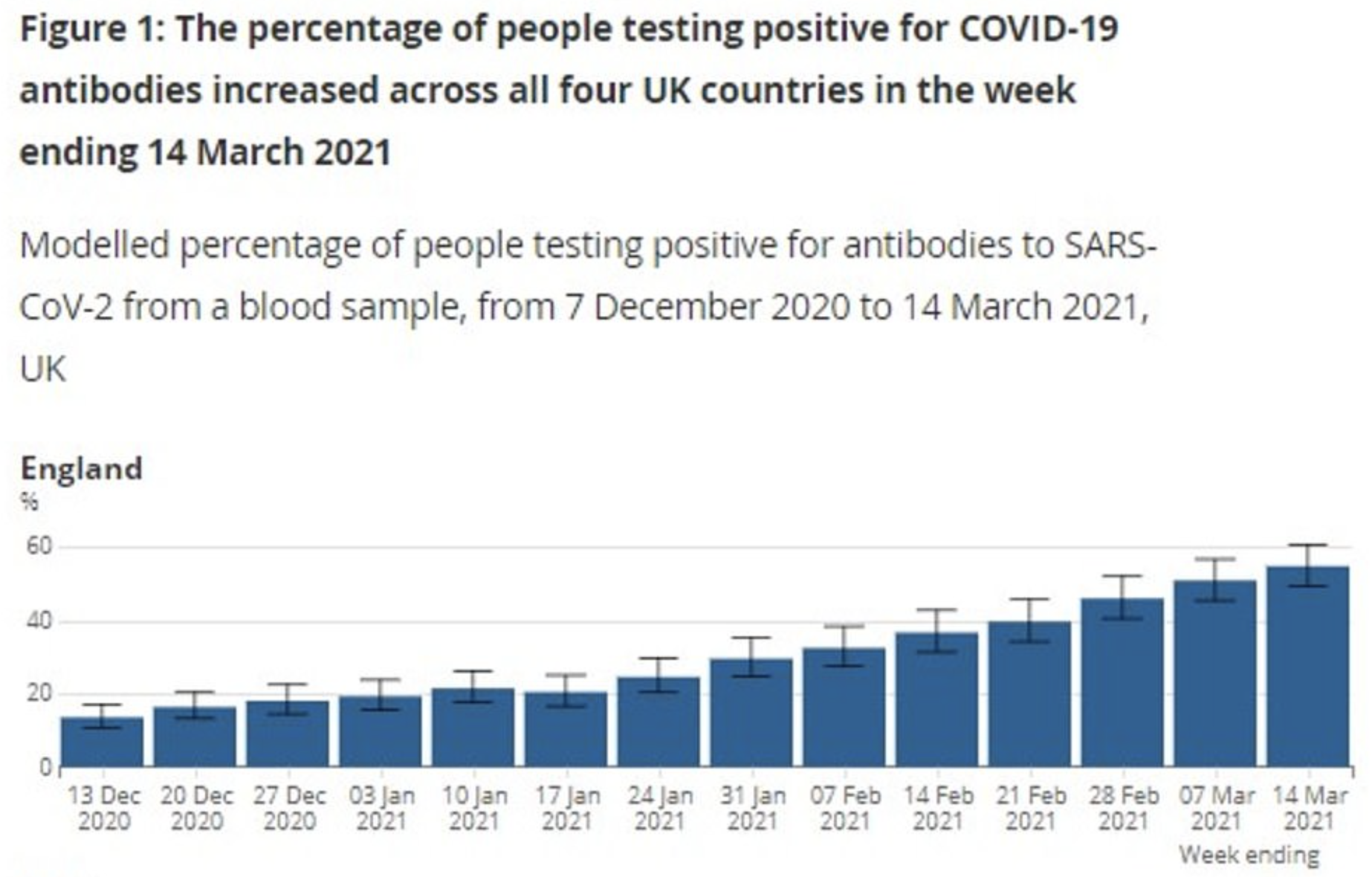 According to an Office of National Statistics survey published today, more than half of people in England now have Covid antibodies. MailOnline has more.

A major Office for National Statistics (ONS) testing survey today revealed 54.7 per cent of people in England had the virus-fighting proteins in the week ending March 14, up from 50.8 per cent the week prior.

The figure is likely to be even higher now because millions more have been vaccinated since the blood tests were conducted a fortnight ago, and it takes about two weeks for immunity to kick in.

It highlights the success of the country’s mammoth vaccine roll-out, which has seen 30.5million Brits given their first dose and 3.7m fully vaccinated.

Boris Johnson is now facing demands to lift lockdown faster, with Covid cases, hospitalisations and deaths having fallen to their lowest level for six months. People in England have to wait at least another seven weeks before pubs, restaurants and hotels can fully reopen and allow customers inside. Foreign holidays are also banned until at least May 17.

One Tory MP told MailOnline the PM must bring forward the arbitrary dates in order to ‘maintain public confidence that we are getting our freedom as soon as possible’. Steve Baker, of the Covid Recovery Group, called on No10 to ask SAGE to see whether the relaxation of restrictions could be safely brought forward.

In other news, also in MailOnline, public concern about coronavirus has plummeted, with the proportion of Brits who say the disease is a big issue facing the UK having fallen by 23% in one month.

A new survey conducted by IpsosMORI revealed 49% of people view COVID-19 as one of the biggest issues facing the UK.

But that number is down 23% on what was recorded in February – the first significant drop in levels of concern about the disease since June 2020.

The polling firm said the figures suggested the “public may feel the end of the pandemic is in sight”.

Stop Press: According to Patrick Flynn in the Telegraph, whatever the Government says about its stage-by-stage roadmap it feels like the people have declared lockdown over.

Covid Involved in Fewer Than 10% of Deaths in England and Wales by Mid-March, ONS Says