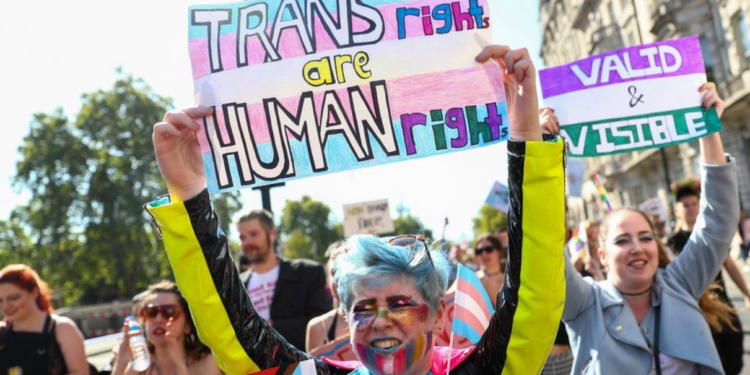 Paul Chase, who wrote in the Daily Sceptic last week about the abrupt pulling of his article in Propel Opinion on trans ideology and the fallout from it, responds here to a critic, Ann Elliot, whose article Propel published in response to his, which he says is wrong on the science and wrong on the law. Propel also published articles by Kate Nichols and editor Paul Charity addressing this controversy which you can also find at the above link.

Well, Ann, like all of my critics you have chosen to attack me for writing the article Propel published on January 6th 2023, without engaging intellectually with what I wrote. And there is a reason for that: you haven’t got an argument. You fall into the lazy trap of assuming that criticism of an ideology, a belief system, in this case gender ideology, is an attack on trans people. This simple category error serves your purpose of misrepresenting what I wrote as hate speech without the inconvenience of having to explain why you think that. So, if you ever decide to speak to me personally, try to think what it was I wrote that you disagreed with, and identify anything that was factually wrong. I’ll wait…

While Kate Nicholls made only a couple of references to me personally, and Paul Charity busied himself eating his third slice of humble pie, you were clearly tasked with conducting the hatchet job. I may be mistaken here, but I don’t recall ever meeting you, so I am puzzled as to what motivates your malice, which oozes from every sentence you wrote. The sadism of gender ideology, and its activist supporters, is one of the defining characteristics of this modern social pathogen. For many it is merely a vector, a useful vehicle into which is poured the envy, bitterness, spite and aggression of people whose status relies on being permanently offended, and who have inchoate concerns and hang-ups they can barely articulate.

Despite your brief being to attack me, you spend the first two paragraphs of your article praising yourself. You describe yourself as an “ardent feminist” and a “supporter of all women regardless of gender, race or religion.” We will come back to your implication that women have more than one gender in a minute, but you go on to say you have suffered discrimination for being a feminist, a woman and a working-class northern lass.

You declare yourself opposed to all forms of prejudice, including transphobia. And then this: “That people should suffer, be persecuted, rejected, assaulted or murdered for who they are is horrendous.” Unless, like me, they hold gender critical views, in which case they are apparently fair game. And in the very next sentence you write: “So, the Paul Chase article in last week’s Propel felt totally abhorrent to me.”

That clearly implies that my article supported or justified prejudice and might in some way validate the persecution, rejection, assault or murder of people subject to prejudice. That is a lie and a disgusting smear. You compound this by stating that what I wrote was not free speech but hatred. I am advised this is defamatory and invite you to publicly withdraw these inferences and promise not to repeat them. I don’t mind robust debate, but to trash my reputation by implying that I engage in hate speech that might support violence towards, and the murder of vulnerable people is utterly disgraceful.

I came out as a gay man in 1971 – 52 years ago – when attitudes to same sex relationships were very different from today’s. I experienced prejudice and bigotry. The idea that I would hate on another minority group is absurd and offensive to me. So, forgive me if I don’t take any penny lectures from you on this subject.

You go on to say that my article was misinformed, with scientific evidence to dispute all my claims. You also make a number of statements about the law that are simply wrong. So, let’s examine each of these in turn.

Your false claims about science

You helpfully provide a link to pieces of research which you say dispute all the claims in my article.

I have read all nine pieces of the research you have provided links to, and none of them dispute or even address the claims in my article. Eight of these research papers address the aetiology of gender dysphoria and point, in various ways, to the possibility that the causation of gender dysphoria has a strong organic component. The ninth piece explores transgender fetishes, such as autogynephilia.

I suspect, Ann, that you haven’t read the research you point to, or if you have you didn’t understand it, but none of it disputes the binary and immutable nature of human sex or any of the points made in my article.

Arguments have been made that because there are rare developmental conditions associated with anomalous chromosomal combinations that can result in ambiguous sex characteristics, that the categories male and female exist on a ‘spectrum’ or are simply ‘social constructs’. Such attempts to reframe sex as a social construct are a denial of material reality and are harmful to scientific discourse and research. And you appear to deliberately endorse these myths – probably by default through ignorance rather than any deliberate attempt to mislead.

But if you want the views of a real scientist, watch the video of world-renowned fertility expert Professor Lord Robert Winston, where he addresses the issue of whether people can change their sex.

Your mistaken statements about the law

You claim: “[T]he bottom line is the law. The Equality Act (2010) protects trans people under the protected characteristic of ‘gender reassignment’ from the start of social transition. It also gives trans individuals the right to be treated the same as any cisgendered person, and the right to access cisgendered only spaces and services. Businesses in our sector must ensure that this is possible for their teams and customers in all their sites.”

The U.K. Equality Act 2010 does not give trans people the absolute right to access so-called ‘cisgendered’ spaces and services — such as women’s changing rooms and women’s refuges. In fact, it sets out many everyday situations where it is lawful to provide single sex services and spaces that exclude trans people.

These include circumstances where a person of one sex might “reasonably object” to the presence of a person of the opposite sex.  I refer you to the Equality Act 2010 – Schedule 3, paragraph 27 (6) and (7).

This would certainly include toilets, changing rooms and shower facilities. How are hospitality venues meant to manage this if we abandon objective categories like sex in favour of the nebulous and ever-changing concept of gender? The solution is that facilities such as toilets, changing rooms and showers need to remain segregated by sex. And why? In order to preserve decency, dignity, privacy and respect – that’s why!

The easy access toilet might be the most practical way to provide people who feel uncomfortable with that segregation in pubs and bars with a facility where they feel safe and don’t make others feel unsafe. These are real issues for hospitality venues.

Let us return to your earlier statements that you support women of “all genders” and that you are an “ardent feminist”. Both these statements cannot be true. Real feminists recognise that women’s rights, and for that matter gay rights, are sex-based. They defend the sex-based rights of women. You, on the other hand, believe that ‘woman’ is a status that a man can identify into.

That belief has consequences. Let me give you two examples. When American swimmer Lia Thomas – a male-to-female transgender woman – competed against men in his own biological sex class he was ranked 554th among competitors in the 200 metres freestyle event. Then he transitioned into a trans woman and competed against biological women and ended up winning an NCAA swimming title – beating two female Olympic medallists in the process. I call this cheating. What do you call it?

Take a look at the video below. It features a male-to-female transgender ‘woman’ named Alaana McLaughlin in an MMA contest against a female fighter. Despite the fact that McLaughlin had undergone transgender surgery and had low levels of testosterone due to hormone treatment, he beat his female opponent Tamikka Brents by bashing her up, and then strangling her unconscious in the second round – while a baying mob of (mostly) men cheered ‘her’ on.

This is the grotesque position you put yourself into, Ann, if you define the word ‘woman’ as anything other than ‘adult human female’.

The real feminists are women like J.K. Rowling, Martina Navratilova, Olympic swimming medallist Sharon Davies; women like Maya Forstater, Kathleen Stock, Joanna Cherry KC, MSP, and Rosie Duffield MP – brave feminists, some famous, some unknown who have put their careers on the line and been cancelled and threatened for holding gender critical views.

Below is a brief glimpse at some of their stories:

So, Ann, I hope you can see from the stories referenced above the difference between real feminists prepared to put their careers on the line, and someone for whom feminism is a punchline at parties.

This little publicity stunt you’ve pulled will backfire on you Ann, because people will see it for the piece of opportunism it really is. You fail on every level in your attack on me because you don’t engage with the content of what I’ve written. Instead, like all my other critics, without exception, you resort to ad hominem attacks based on emotion uninformed by intellect, while expressing faux outrage. Your article in Propel Opinion was nothing more than a nasty piece of attention-seeking, narcissistic virtue-signalling.

I challenge Ann Elliott to a public debate in which she will have the opportunity to debunk all the claims made in my article and I will defend them. And perhaps Paul Charity could facilitate this debate – once he rediscovers his moral compass and grows a pair.

Paul Chase is the leading industry commentator on alcohol policy and public health. He is the author of Culture Wars and Moral Panic – the story of alcohol and society. He is regularly published in industry journals and is frequently a speaker at industry events.