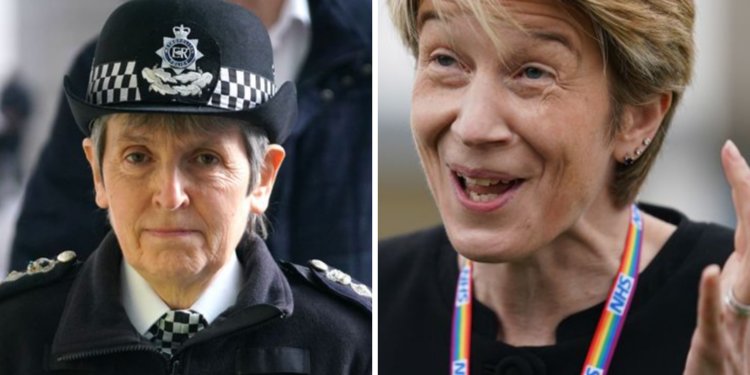 Hopefully all readers will fondly remember Cressida Dick. Dame Cressida Rose Dick DBE QPM is a British retired senior police officer who served as Commissioner of London’s Metropolitan Police from 2017 to 2022. She was the first female officer to lead the Metropolitan Police Service, or the Met, in London. Dick joined the Met in1983.

When appointed, new Met chief Cressida Dick reportedly said “diversity is at the heart of her role“. In 2018, Dick launched a campaign to increase the proportion of female officers in the Met. At the time, 27% of Met officers were women; Dick aimed to increase that figure to 50% over time, although she did not set a target date. Later she was quoted as saying: “We’re growing, we’re bigger, more capable, more diverse, more scrutinised and better equipped than ever before. The streets are safer and I’m proud of that.”

Just in the year Cressida launched her campaign to increase the number of female ‘policepersons’, there was around a 20% increase in violent crime. People unfamiliar with the intricacies of policing might be forgiven for wondering whether increasing the gender diversity of the Met really should have been a priority during a period of rising crime.

Cressida herself ticked a few important diversity boxes: female – tick; lesbian – tick; married to a woman – tick. If only she had been black or Asian, she’d have had a ‘full house’. A cynic might be tempted to conclude that Cressida Dick was chosen for her diversity credentials and not for any ability to fight crime, which increased inexorably under her watch. Cressida was eventually pushed to resign (with about £166,000 of our money plus a massive pension) after a series of blunders and scandals. When she left, the Met was put in ‘special measures’ due to the force’s apparent inability to do the job it was supposed to do.

I made a short (two minutes) YouTube video about Cressida Dick’s rise to fame and fortune (with apologies to Gilbert and Sullivan).

She gets paid about £260,000 a year and no doubt will soon get a few gongs and a seat in the Lords as all those of her ilk invariably do.

You may have thought that there were some small problems with the NHS England – people waiting 10-20 hours for an ambulance, possibly 500 people a week dying early due to failing healthcare, some of the worst cancer survival rates in the developed world and so on. It may well be that Ms. Pritchard has a laser-like focus on solving the NHS’s many problems. We should all hope so. However, some of her managers, many of them also on six-figure salaries, could seem to be blissfully unaware of these issues and are pushing ahead with hiring even more DIE (Diversity, Inclusion and Equality) managers apparently in the belief that more DIE managers is just what is needed to solve the NHS’s current problems and improve patient care.

Here are just a few extracts from some current job descriptions of these individuals. The words ‘patient care’ are absent from these job vacancies. In fact, most focus on achieving the NHS’s internal organisational DIE targets:

In fact, the ethnic group which is most under-represented at the NHS is white British.

Moreover, some old-fashioned people might wonder about the amounts of our money the NHS spends on woke initiatives. The latest seems to be the Maternity Gender Inclusion Programme.

We all know there have been major problems at many NHS maternity units. Partly these have been due to a lack of midwives and partly due to mismanagement. The latest was the scandal at Shrewsbury and Telford hospital where over 200 babies and at least nine mothers died reportedly due to poor care. People unfamiliar with the intricacies of healthcare might be forgiven for wondering whether a Maternity Gender Inclusion Programme which would train midwives at 40 NHS Trusts on the use of ‘trans inclusive language’ and pronouns – due to it being based on the Improving Trans Experiences of Maternity Services – really was likely to solve the problems in the NHS’s collapsing maternity services. After all, most of us know which sex can have children and which can’t. Moreover, there’s a bit of a clue in the word ‘maternity’. There must be a reason they’re not called ‘paternity’ units.

Amanda Pritchard may turn out to be the best leader the NHS has ever had. She may well be relentlessly focused on cutting waiting lists and improving patient care. But looking at the number and type of DIE roles our crisis-hit NHS is currently advertising and the ‘progressive’ re-education programmes being forced on NHS staff, a cynic might be forgiven for concluding that the Cressida Dick woke managerial car crash at the Met is now being repeated almost word for word in the increasingly woke NHS. Like the Met, the NHS could seem to be becoming a totally dysfunctional organisation which has forgotten why it exists. Like the Met, the NHS could seem to be spending more time obsessing about and woke-ifying its own internal organisation than on trying to deliver what it was set up to do.

I think we all can imagine what happens next. And it won’t be good for patients.