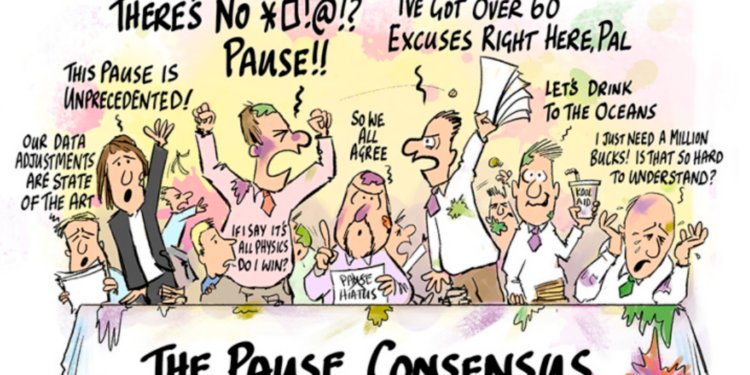 Twenty years of pausing global temperatures since 1998 are casting increasing doubt on the suggestion that human-produced carbon dioxide is causing a climate emergency and leading to runaway heating. Such doubt, of course, kicks away any justification for installing a Net Zero regime that is set to cause massive societal and economic dislocation. Needless to say, these concerns are nowhere to be seen in the end of year reporting of temperature trends that highlight increasingly improbable rises partly based on non-climate corruptions such as from nearby airport runways. All of this cherry-picking is taken from surface datasets that have removed a 1998-2012 standstill using retrospective upward adjustments.

In a recently published paper, Nicola Scafetta, a climate research scientist at the University of Naples, noted that the Met Office HadCRUT global dataset recorded warming of 0.03°C per decade during the hiatus years of 2000-2014. As Daily Sceptic has reported, there have been two retrospective adjustments of HadCRUT since then. In 2013, Scafetta noted that HadCRUT version 4 increased the warming to 0.08°C per decade. HadCRUT5 further adjusted the 2000-14 figure to supply warming of 0.14°C per decade, using, notes the science blog No Tricks Zone (NTZ), “the computer model-infilling method”.

Within the last decade, continues NTZ, the 2000-14 temperature trend has been changed from a pause to strong warming. “After all, when the data don’t fit the narrative, it is time to change the data,” concludes NTZ. All global surface datasets use similar measurements, and all have made recent upward adjustments to their global heating calculations.

Needless to say, the BBC led from the front in the battle to weaponise the 2022 results from the surface databases. It reported the view of scientists from the EU weather service Copernicus that last year, “saw a pattern of global warming that has become the new normal”. Global temperatures were said to be approximately 0.3°C higher last year than the 1991-2020 reference period. According to Samantha Burgess, a Copernicus deputy director, the global temperature will rise another 0.4°C within the decade under a “simple linear extrapolation”.

Of course it depends what temperature database you are extrapolating from. So far as the surface measurements are concerned, Scafetta is unimpressed. In general, the surface temperature records, and the homogenisation algorithms used to adjust them, present several problems that may have exaggerated the warming. In his considered view, the integrity of the records and, therefore, the ability to correctly determine the global warming trends over the last 120 years, “should be questioned”.

Satellite measurements are used extensively in both meteorology and climatology, and an accurate record of global temperatures is available going back to 1979. These measurements avoid most of the corruptions and inaccuracies of surface measurements. But they are largely ignored. Last year, Google AdSense ‘demonetised’ a web page detailing the latest monthly figures on the grounds of “unreliable and harmful claims”. As I have regularly reported, global warming reported by satellites is considerably less than that shown by the popular surface figures. According to the satellite record, since 1979, the planet has warmed about 0.6°C with most of the warming occurring before 1998. Since then, the planet has warmed little more than 0.1°C. As can be seen in the latest graph below, the only significant warming this century was around the middle of the last decade, and it was caused by a particularly powerful natural El Nino oscillation. The early century pause, absent now from the adjusted surface datasets, is clearly shown, as is the latest 100 month and counting plateau.

In a recent essay published in Watt Up With That? titled “Good 2022 climate news that the MSM didn’t tell you“, the science writer Javier Vinos noted that global warming is slowing down. The 15-year rate to the late 1990s was very high, reaching 0.35°C per decade. The average over the entire period of satellite records is 0.13°C per decade, but the long-term trend has fallen from 1.6°C per century to 1°C per century. Vinos notes that the long-term trend has been achieved at a time when CO2 emissions continue to rise.

Of course, the temperature wars are part of the battle to persuade populations to sign up to the command-and-control Net Zero project. Linking higher temperatures to increased CO2 levels, and suggesting it is all due to the 4% human contribution of all CO2 entering the atmosphere, has been an easy green scare to sell. But the political tactic relies on temperatures continue to play ball. It is becoming obvious that global warming ran out of steam some time ago. Carbon dioxide is a greenhouse gas and has warming properties, but the historical and paleoclimatic record does not provide any conclusive evidence that the gas is the main regulator of temperature in the atmosphere. Other, often little understood influences seem to play a much more important role. So far as the gas is concerned, there is evidence that its warming effect is logarithmic, and this warming falls dramatically when it rises above certain atmospheric levels. In fact, this proposition provides a more convincing and logical explanation for most climate observations going back 600 million years.

The idea that humans cause all or most changes in the climate by burning fossil fuel is an unproven science hypothesis. There is not a single credible science paper that proves it. The Australian geologist Professor Ian Plimer recently noted that if there was one, there would be endless citation of the papers demonstrating this proof. Instead, “there is obfuscation and deafening silence”, he said.

Stop Press: Chris was invited onto Richard Tice’s Talk TV show last Sunday and they discussed a number of issues arising from recent Daily Sceptic articles. These included the Bangladesh and Pakistan floods and the corrupted surface temperature datasets. Of particular interest was the curious case of the highly-prized 40.3°C record set for the U.K. last July 19th and the fact it lasted for only 60 seconds half way down the runway at RAF Coningsby.