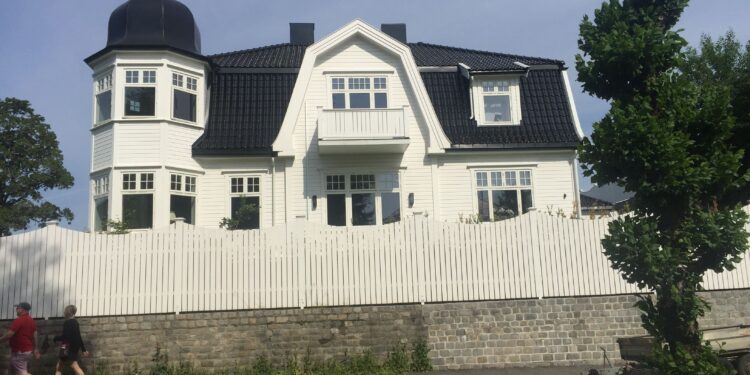 I’ve just spent a week in a very white place. The snow fell solidly for two days, and everything was white – the air, the ground, the trees, the streets. And to complete the picture, the houses, in the little seaside town south of Oslo, blended in perfectly, being painted pure, brilliant white. When I got back to a green(ish) Scotland, I didn’t sigh with relief, “Thank goodness, I’m finally out of that racist hellhole.” But perhaps I should have.

According to Norwegian academics, “whiteness” and “white supremacy” are terms to take literally, and the colour white, in particular the white paint that is so commonly used on Norwegian houses, equals racism. Had it been the first of April, I would have assumed this was a hoax, but alas this is serious, state-funded stuff.

From the research project ‘How Norway Made the World Whiter (NorWhite)’ co-authored by Ingrid Haland, an associate professor at the University of Bergen, we learn that:

Whiteness is one of today’s key societal and political concerns. Within and beyond academia worldwide, actions of revolt and regret seek to cope with our racial past. In the pivotal works in whiteness studies within art and architecture history, whiteness is understood as cultural and visual structures of privilege. The new research project ‘How Norway Made the World Whiter’ (NorWhite) funded by the Research Council of Norway (12 million NOK), addresses a distinctively different battleground for politics of whiteness in art and architecture. Two core premises underpin the project: Whiteness is not only a cultural and societal condition tied to skin colour, privileges, and systematic exclusion, but materialise everywhere around us. Second, one cannot understand this materialisation without understanding the societal, technological and aesthetic conditions of the colour itself.

Following this inane logic, I should be ashamed at owning a white house, but perhaps pleased that my parents’ cabin in the mountains is painted brown? Or is that cultural appropriation?

“Until now, however, this story has been lesser known to scholars and the public,” the description reads. Not for much longer!

NorWhite will connect the challenging topics: whiteness, technological innovation, and mass-exploitation of natural resources in a single case study. The research project will study the Norwegian innovations the chemical compound titanium dioxide (TiO2) and the white pigment titanium white in a historical, aesthetic, and critical lens – focusing on how the innovations transformed surfaces in art, architecture, and design – in order to show how aesthetic – and thereby societal – transformation is driven by technological development.

Just how anyone has been oppressed by white paint remains a mystery, but I’m sure the authors of the study will enlighten us once they’ve used up their 12 million kroner budget (almost £992,000).

Some might say it’s rather arrogant to assume that Norway painted the world white, but it’s true that the origins of modern, white paint are Norwegian. As the authors say, the process of making white paint with a far better coverage than previously obtained was invented in 1916 by two Norwegian chemists, Dr Peder Farup and Dr Gustav Jebsen (incidentally, a relative of mine). But rather than taking pride in this achievement, the study seeks to problematise and degrade it. I have no reason to believe Drs Farup or Jebsen were white supremacists simply for discovering a chemical method that separated the iron and titanium in the mineral ilmenite to produce pure, non-toxic white paint, but then I don’t have the creative imaginations of Whiteness Studies scholars.

More recently, scientists at Purdue University developed a new super-white colour of paint so bright “you might need shades” – the ultimate form of white supremacy! Perhaps my ancestor will be let off the hook, then.

The project is curiously also receiving funding from Titania AS and Kronos Titan, the companies that pioneered the production of white paint starting in the 1920s. Maybe they believe all publicity is good publicity.

The history of white paint is interesting enough in itself, so why would postmodernists meddle with it by applying their “critical lens”? I guess grievance scholars stick to what they know best: grievance studies. There is only a linguistic connection between the whiteness of paint pigments and whiteness as applied in critical race theory and whiteness studies. Whiteness is hard to define – perhaps on purpose. If it’s connected to skin colour, it’s a very misleading term. At least I’ve never seen anyone with “skin as white as snow” outside the Brothers Grimm fairytale. A child could tell you that the shade white (which simultaneously contains all the colours and none) has nothing to do with the skin colour of any living beings. Why else would the peachy crayon that children call “skin colour” even exist? Such basic, childlike knowledge evades even the cleverest woke academics.

The premise of this project, namely that Norway “made the world whiter”, is built on a false premise. White was always a popular shade. In ancient Egypt and ancient Rome, priestesses wore white as a symbol of purity. Romans wore white togas to symbolise citizenship. White was the most common shade for new churches and government buildings from the 1800s onwards. It’s an important colour in several religions, often symbolising purity, innocence and virginity. “Whiteness” is not even necessarily connected with skin colour according to those who delve into racist theories.

Whether the grievance scholars are running out of ideas, or conjuring up demons where none exist so they can get the credit for slaying them, the truth is that this project deserves ridicule. And not £992,000 of taxpayers’ money.