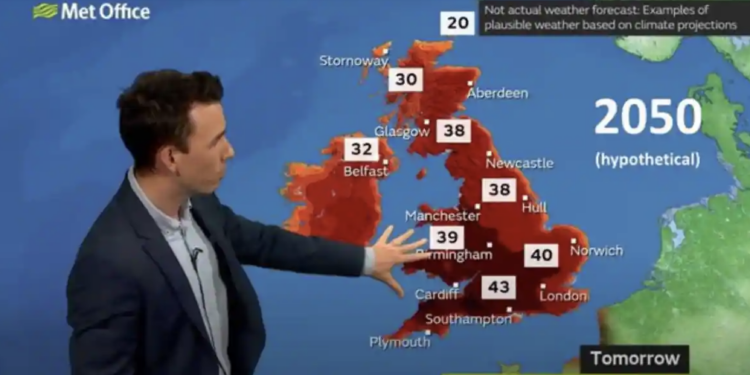 There is great excitement – jubilation even – at the Met Office and its mainstream media publishing partners with the news that the U.K. is on track to record its ‘hottest’ year ever (well at least since records began about 150 years ago). Helped by a mild winter and autumn and a glorious summer, the average temperature in 2022 looks to come in at 9.99°C, up from the previous 2014 record of 9.88°C. But the overall global temperature, according to accurate satellite measurements, has not moved for over eight years. As we shall see, the Met Office increases in surface measurements would appear to owe something to increasing urban heat corruption, as well as some curious sitings of measuring devises.

There is no more curious placing of a measuring devise than half way down the runway of a military airbase that houses two squadrons of Typhoon fighter jets. The Met Office tells us that one of the weather extremes of 2022 was a high of 40.3°C on July 19th. Regular readers will recall that we have questioned this ‘record’ at RAF Coningsby, since the temperature held for only 60 seconds at 3.12pm and was preceded by a 0.6°C jump in the previous two minutes. By 3.13pm the temperature had fallen back to 39.7°C. The Met Office first explained that the sudden rise could have been due to cloud cover, but a satellite photo shows clear skies across Lincolnshire at that moment. The Daily Sceptic has since established that at least two Typhoon jets were operating at the base at the time. The Met Office has ignored all our subsequent questions about the claim.

The Coningsby incident is indicative of possible urban heat corruption over much of the Met Office surface temperature database. Airport sitings are common with temperature highs often reported at Heathrow and nearby RAF Northolt. Temperature recordings at airports are an easy source of data, since accurate measurements alongside runways are required for safe aircraft movements. But similar temperature corruptions are also to be found in towns and cities.

In recent ground-breaking work, two American scientists – Dr. Roy Spencer and Professor John Christy – working out of the University of Alabama in Huntsville, have separated the effect of urbanisation on temperature measurements. They used a satellite database of urbanisation change called ‘Built Up’ and found large corruptions across the urban record. Over the last 50 years, it was discovered that warming had been exaggerated by up to 50% across the eastern United States.

Spencer and Christy also checked out a number of U.S. airports, comparing the raw data from the U.S. weather service NOAA with their ‘de-urbanised’ figures. At Orlando International Airport in Florida, the NOAA data showed massive warming of 0.3°C per decade, but this fell to just 0.07°C when adjusted for urban heat. The two scientists have supplied similar findings for Canada and promise further country work in the future including the U.K.

In the U.S., NOAA’s surface data has been criticised on a number of scientific fronts. The American meteorologist Anthony Watts recently published a 10-year study calling the database “fatally flawed”. He found that 96% of U.S. temperature stations failed to meet what NOAA itself considered to be acceptable and uncorrupted placement standards. The findings must be a major concern since the U.S. record is a large constituent of global databases, including one run by the Met Office called HadCRUT. These global databases have been adjusted to show more recent global warming, a trend that is not immediately obvious in satellite or meteorological balloon records.

In light of this recent urban heat evidence, the Daily Sceptic has asked the Met Office if it intends to continue using raw data from airport and urban sites without making substantial recalculations to remove all non-climatic corruptions? As we have noted, the Met Office has failed to respond. But urban heat corruption must be a major consideration when analysing this heavily-quoted data. In the year of the hot summer of 1976, the average annual temperature was 8.74°C, compared with this year’s 9.99°C. But only 56 million people lived in the U.K. around 50 years ago compared with almost 69 million today. Over the last 50 years there has been considerable urban development, and many towns and cities have increased significantly in size and density.

It is reasonable to ask if average Met Office temperatures rising well over 1°C during this period solely reflect natural increases, or is around 50% of the warming a temporary feature of urban development? One day, the Met Office might tell us. Since 1979, the satellite record has shown warming across the globe of around 0.6°C. Temperatures have still to pass the last high point in 1998.

In the meantime, it is full speed ahead with weather catastrophisation stories designed to promote the Net Zero political agenda. In the latest bout of climate Armageddon preaching, the BBC subbed up the Met Office press release and listed this year’s “extreme” events. Obviously, the Coningsby triumph was mentioned (see above), but so was the mild autumn. Also “extreme” was the brief winter cold snap in early December (nobody saw that coming, did they?) and three storms In February. Depressions often follow one another in the middle of winter off the Atlantic, so why this should be considered “extreme” is a mystery. Tinder-dry conditions are said to have “gripped” the U.K. during August. Again, dry periods in the middle of summer – it’s almost beyond understanding.

Stop Press: Tom Slater has written a good piece for Spiked on the rise of the eco-cult.