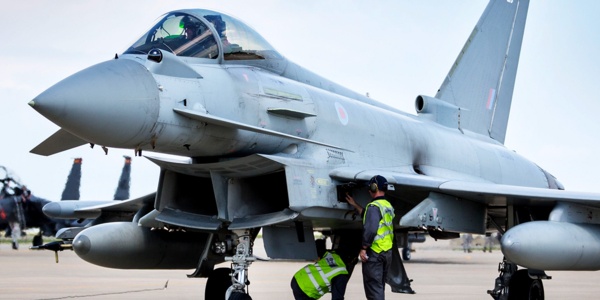 The Met Office has failed to quash the doubts that have arisen about its claimed 40.3°C UK record temperature produced on the afternoon of July 19th by the side of the main runway at RAF Coningsby. The military station is home to two squadrons of Typhoon jets and is extensively used for fighter pilot training. The U.K. record was set at 3.12pm during a mini-heatwave following a large jump of 1.3°C over the previous five minutes. Within a minute of the record being set, the temperature fell by 0.6°C. The Daily Sceptic has sought a response to three questions seeking further details about the events surrounding the record, but to date has had no reply.

The Met Office did however reply to the local publication Lincolnshire Live stating that the verifying of temperatures was a “rigorous process” and all records collected were accurate. This process was said to involve cross-checking between stations and an analysis of the weather on the day “and how it compared to the Office’s forecasts”. Lincolnshire Live asked about the sudden jump in the temperature at the time of the record, and was told there was some “thin cloud” around at the time.

Breaks in cloud cover was the reason advanced in July 2015 when two journalists queried a record temperature at Heathrow airport. Here it was noted that the temperature had jumped 0.9°C in two minutes. Dr. Mark McCarthy from the Met Office said solar radiation was “the most plausible and sufficient explanation” for the peak in temperature.

Last Monday, the Daily Sceptic published a satellite photograph of the British Isles showing no cloud over large areas of eastern England at 3pm on July 19th. Met Office observations for 2pm on the same day confirm the weather at Coningsby was sunny with visibility up to 40 kms. Given reasonable and continuing doubts, we asked the Met Office three follow-up questions.

The Daily Sceptic made three attempts to elicit a response, but to no avail. This was a little surprising since prior to the publication of our first article the Met Office wrote: “Could you provide a summary of your likely piece so we can provide a relevant statement for inclusion?”

July 19th in the U.K. was an exceptionally hot day in a generally hot summer. Social media correspondents have asked why bother querying the 40.3°C record since similar records were set elsewhere. However, these were also at busy airports, along with a measuring devise set at Kew Gardens located yards from one of the largest tropical greenhouses in the world. But the Coningsby record is hugely valued by green activists because it is the first time – since records began – that 40°C had been broken in the U.K. Discussing the record, Dr. McCarthy noted that in a climate unaffected by human-induced climate change, it would be virtually impossible for temperatures in the UK to reach 40°C.

There is of course no scientific proof Dr. McCarthy can draw on to back up this speculative assertion, but it gives an insight into the totemic value the Coningsby record has already achieved. To this day, it is widely quoted in the mainstream media. However, it is important to investigate all these temperatures records that the Met Office has made a habit of declaring so we can gain an insight into the way the operation collates all its data.

The Met Office is all-in on anthropogenic climate change and over the last two decades it has become a big promoter of the green cause and Net Zero. In January this year, for instance, it funded climate catastrophe work from a group of academics and Cambridge Econometrics that forecast the English could revert to hunter-gathering and feudal warfare after 2040. But its main work, for which it receives considerable taxpayer funding, is to supply accurate meteorological records and reasonable forecasts based on this information.

This process is now under serious investigation by scientists concerned about the constant upward adjustments of all the major global surface temperature datasets. This occurs at a time when accurate satellite and meteorological balloon data suggests considerably less warming over the last two decades. Over the last 10 years, the Met Office has added 30% extra global warming to its recent HadCRUT record. In the process, it removed a temperature pause from 1998 to around 2012. The pause, which the Met Office wrote about at the time, is still visible in the satellite data.

The most pressing issue, however, is the corruption of data caused by the growth of urban centres around the world. The disconnect of all the major surface temperature databases from the satellite and balloon data is becoming obvious. As we noted in one of our questions to the Met Office, recent work by two American atmospheric scientists shows considerable urban corruption in the U.S. record. It was found that urban heat had added around 50% extra warming over the last 50 years to the eastern United States.

The Met Offices does valuable work and provides a vital community weather service in the U.K. But its feverish promotion of the green agenda would sometimes appear to be at odds with its duty to provide unbiased weather/climate information and uncorrupted temperature figures.

Guy de la Bédoyère: “I’m as British as They Come, But Never Take Offence When People Ask Me Which Part of France I’m From.”