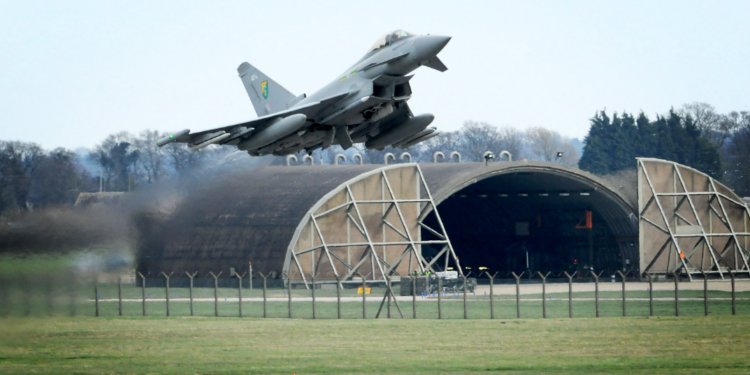 Doubts are rising about the recent U.K. record high temperature, measured by the runway at RAF Coningsby on the afternoon of July 19th. Over six minutes, the temperature jumped suddenly by 1.3°C to 40.3°C at 15.12 (3.12pm), and was 0.6°C lower just a minute later. In just two minutes from 15.10 the rise was 0.6°C. The record was set during a mini-heatwave last summer, and has rarely been out of the headlines promoting climate ‘breakdown’ and the need for a Net Zero solution ever since.

Air temperatures can rise over short periods if weather conditions change – for instance, if the sun appears quickly from behind a large cloud, or the wind direction moves. But July 19th in Coningsby, Lincolnshire, was more or less cloudless around 3pm (see below), and the wind direction from the south-west was constant. Another explanation might be sought in the movement of two squadrons of Typhoon fighter jets at the large base that employs up to 3,000 people. The thermometer at Coningsby, the RAF’s primary Typhoon station, as with all airports, is placed next to the runway to provide vital operational information. In the absence of credible meteorological explanations for such a large spike, aeroplane movement must be suspected as the most obvious cause.

According to the plane spotters guide website Thunder & Lightnings, on a good day at Coningsby, “it can be wall-to-wall action” with never more than half an hour or so quiet. Modern fighter aircraft are extremely powerful machines. Spotters note fence panels blown away by the after-burners, while photographers are warned that “heat haze” can spoil pictures. When the jets are taking off or taxiing, they are pumping considerable amounts of hot gas into the surrounding atmosphere.

This is not the first time that concerns have been raised about Met Office claims of a temperature record at an airport. In 2015, it claimed a U.K. July record temperature of 36.7°C. Soon after, a number of journalists including Paul Homewood and the late Christopher Booker from the Sunday Telegraph raised doubts about some of the circumstances surrounding the record at Heathrow airport. It was noted that the temperature jumped by 0.9°C in two minutes.

Homewood remarked at the time:

No engineer would trust such a spike in any other field, and would throw it out unless he had firm evidence that it was correct. It is hard to avoid the conclusion that the reading at the Met Office station at Heathrow is either incorrect, or has been artificially inflated by local, non-climatic factors.

The Met Office responded to the concerns by floating the possibility that breaks in cloud cover were the main cause. Dr. Mark McCarthy from the Met Office told the green activist site Carbon Brief that solar radiation is “the most plausible and sufficient explanation” for the peak in temperatures. It would seem that another “plausible” explanation is required for Coningsby, since, as noted, clouds were absent.

Whatever the reason for the sudden spike at Coningsby to produce the now official U.K. temperature record, there can be no doubt that temperature data taken by busy airport runways are of use only to ground crew and pilots. They are far too corrupted to be used for plotting local or global trends in temperature, and are being used as a political tool to influence progress on the command-and-control Net Zero project.

But as we have seen, airport temperature data are widely used in all the major global datasets. In 2010, Professor Ross McKitrick discovered that about half of all land surface temperature measurements were taken near or adjacent to airport runways. The U.S. meteorologist Anthony Watts has worked for over a decade looking at U.S. weather stations. His recent report noted that 96% of the weather stations used by the U.S. weather service NOAA were “corrupted” by the localised effects of urbanisation. Watts found that a “slight warming trend” when data were compared with “unperturbed” stations, was “approximately half the claimed rate of increase promoted by many in the climate science community”.

Others are more brutal in their conclusions. Emeritus Professors William Happer and Richard Lindzen recently told the U.S. Government that over the last several decades, “NASA and NOAA have been fabricating temperature data to argue that rising CO2 levels have led to the hottest year on record”. These false and manipulated data were said to be an “egregious violation of scientific method”.

Over the last few weeks we have had the first fruits of ground-breaking urban heat research by atmospheric scientists Dr. Roy Spencer and Professor John Christy of the University of Alabama in Huntsville. Their work attempts to remove the effect of urban heat from surface temperature datasets. Looking first at the United States, they found 50% less warming over the last 50 years across the eastern U.S.

As the graph above suggests, some of the greatest urbanisation impacts on warming were found at airports.

The Met Office supplied the Daily Sceptic with the detailed temperature record for Coningsby and the satellite photo that shows no significant cloud over Lincolnshire at 3pm on July 19th. It also confirmed the wind was from the south-west throughout the day. The Met Office is welcome to reply to this article and address the issues raised, including the continued use of airport measurements in its own datasets.