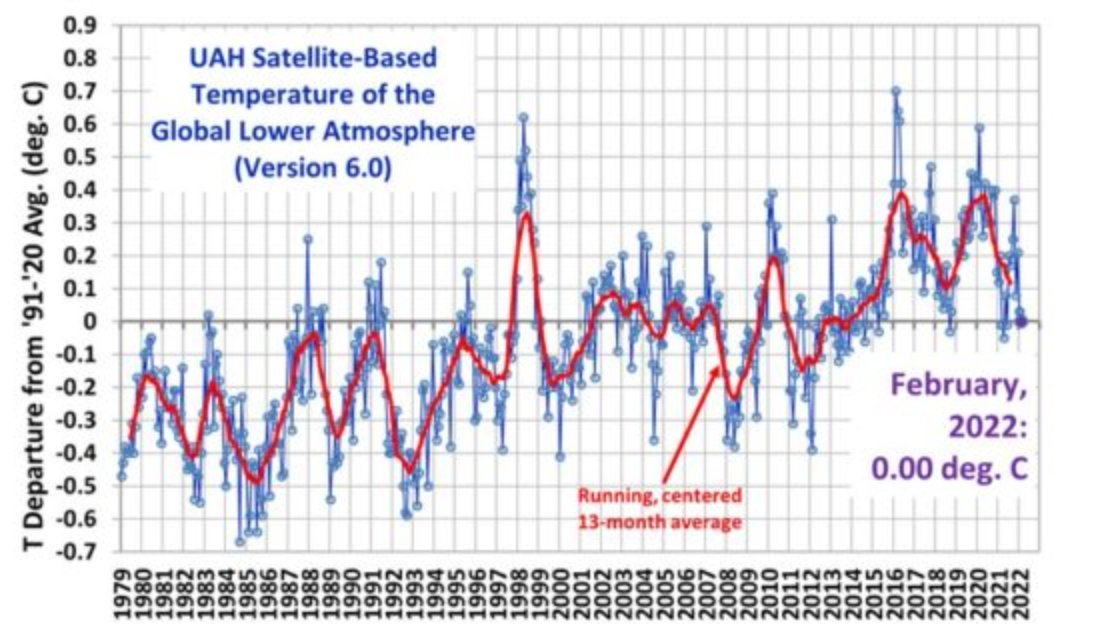 The latest satellite temperature data for February show no movement from the 30-year average. The news is further evidence that global temperatures started to run out of steam nearly two decades ago. The highly accurate satellite measurements also reveal no global warming for the last 88 months.

The data is compiled by Dr. Roy Spencer from the University of Alabama, who was kicked off Google AdSense recently for publishing “unreliable and harmful claims”, e.g. the latest satellite data showing global warming has ground to a halt. The move demonetised Dr. Spencer’s monthly satellite update page by removing all Google-supplied advertising. Google says it will ban all sites that are sceptical of “well established scientific consensus”.

Dr. Spencer has been compiling satellite temperatures for 43 years and has received awards for his work from NASA and the American Meteorological Society. He is currently working with NASA on the Advanced Microwave Scanning Radiometer flying on the Aqua satellite.

Scientists – people with qualifications in subjects such as physics and chemistry – have long debated the complex causes of global warming and cooling. The role of carbon dioxide is undoubtedly important, but nobody knows how much warming is caused when levels rise in the Earth’s atmosphere. Some argue that the effect is small, and we could do with more of the gas, which has had a marked effect on the growth of extra vegetation over the last 30 years. Interesting, some work is being done on the ‘saturation’ effect of CO2, although it receives little publicity. This looks at the infrared spectrum and suggests CO2 loses much of its ability to warm the atmosphere once certain levels are reached. Much of the disaster porn, however, relies on computer models which guess that doubling CO2 levels causes global temperatures to rise by 6°C. This is despite the fact that no climate model has ever produced an accurate warming forecast in 40 years.

Surface measurements are generally preferred and are heavily promoted by the U.K. Met Office since they fit the global warming narrative better. But urban heat distortions are considerable, not least in those readings highlighted by the Met Office at Heathrow Airport.

But even surface measurements are starting to show obvious temperature slow downs.

This graph shows the latest average U.K. temperature from the Met Office. It suggests a pause from the middle of the last decade, a pause that was preceded by 15 years of slowing growth. The U.K. experience is similar to many other northern hemisphere countries. Why did temperatures fall from 1945, but then rebound strongly for a few years until the turn of the millennium? Was there a link with rising CO2 levels? There isn’t much evidence for such links in the past. Was it a natural bounce back from the mini ice age that lasted from medieval times to around 1800?

Or maybe a fuller, more sophisticated, explanation is that the atmosphere is a very complex place, impossible to model and despite ‘settled’ science, currently beyond our full understanding.