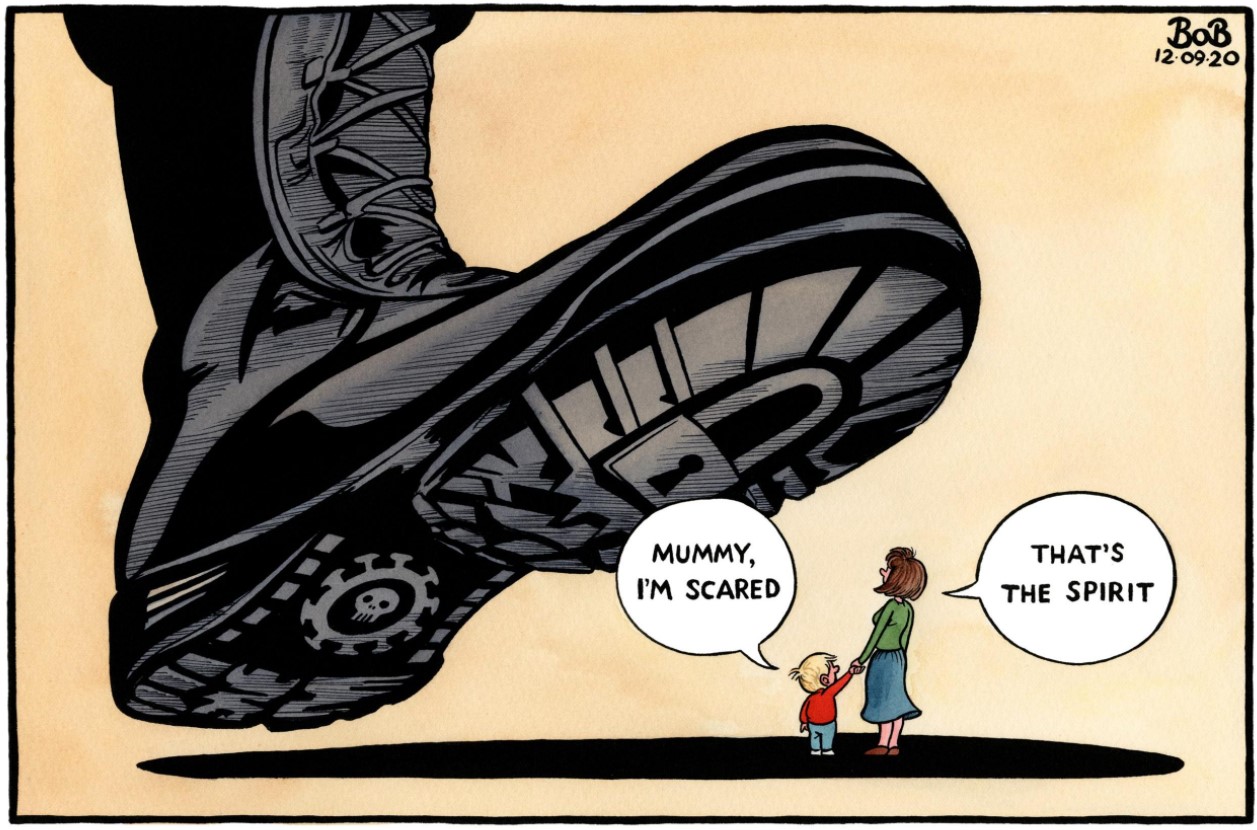 The three major controversies over pandemic management for the past three years have been lockdown measures, universal masking recommendations and mandates, and Covid vaccines.

The last was a pharmaceutical intervention using revolutionary new technology. The first two were radical departures from the existing scientific and policy consensus as encapsulated in official documents from the World Health Organisation (WHO) and in several national pandemic preparedness plans. They established the willingness of the state to dictate every aspect of people’s lives, down to the most ridiculous and absurd details.

For example, people were told when they could shop, the hours during which they could shop, what they could purchase, how close they could get to others and which direction they could move in by following arrows on the floor. Governments also stepped into nations’ bedrooms at home to dictate with whom people could and could not be intimate: a ukase that notoriously turned Professor Neil ‘Lockdown’ Ferguson himself into Professor Pantsdown.

Lockdowns thus proved the extent to which people would comply with state directives without deploying independent critical thinking and, like frogs in boiling water, their almost total lack of concern about the gradually increasing degree of infringements of civil liberties and personal freedoms.

Compliance with often idiotic rules was ratcheted up to another level still with mask recommendations-cum-mandates, with one additional notable feature. Governments were able to mobilise members of the public to exert peer pressure and societal coercion to enforce compliance, backed by often brutal police coercion against pockets of resistance and protest.

In retrospect, it’s doubtful if the degree of state and social coercion deployed to increase vaccine uptake would have been possible without the ground having first been prepared with lockdowns and masks.

Lockdowns were a euphemism for a wholesale shutting down of all social and most economic activities and locking up entire populations under de facto house arrest. They were imposed on and off for two years with the goalposts of justification shifting from flatten the curve in two to three weeks to protect the health system, wait for the vaccine and stop the new variant.

They were based neither on good science and best-practice medicine, nor were they commensurate with the age-stratified threat from the novel coronavirus to individual and public health. By contrast, the health, mental health, social, educational and economic harms caused by the lockdowns have locked in generational poverty and inequality within and among states.

The Neil Ferguson-led Imperial College London models of Covid mortality that panicked governments into unprecedented extreme countermeasures turned out to be several factor-fold higher than empirical outcomes. A peer-reviewed study published in the European Journal of Clinical Investigation  by Eran Bendavid, Christine Oh, Jay Bhattacharya and John Ioannidis in January 2021 failed to find “clear, significant beneficial effect” of stringent lockdowns “on case growth in any country”.

That remains the case to this day either when looking at countries or at U.S. states.

Early data – from China, Italy, Spain, the Diamond Princess cruise ship – told us in February-March 2020 already that the most vulnerable were elderly people with existing serious health conditions. All the data since then have been entirely consistent with this and it was also underlined in the Great Barrington Declaration in October 2020: “We know that vulnerability to death from COVID-19 is more than a thousand-fold higher in the old and infirm than the young. Indeed, for children, COVID-19 is less dangerous than many other harms, including influenza.”

On November 16th 2022, the Guardian reported that Europe faces a “cancer epidemic” because 1 million cancer diagnoses were missed because of lockdowns. In the U.K., which experienced the highest proportion of lack of access  to healthcare in Europe during the pandemic, there were almost 9,000 excess cancer deaths by mid-November 2022 since the start of the pandemic. Meanwhile Sweden, the object of much abusive analysis in the mainstrem media in most of 2020, was fully vindicated in 2022 with one of the lowest all-cause mortality – the metric most resistant to being gamed to fit a narrative bias – rates in Europe.

Once lockdowns were firmly in place as public policy, the next previously discredited and discarded non-pharmaceutical intervention to come on the policy agenda was facemasks for the general population in indoor and outdoor community settings. A 14-year-old British student named Jack Watson was able to spot the many inconsistencies, contradictions and absurdities of lockdown and mask restrictions for schoolchildren. A 1920 study of mask-wearing during the Spanish flu concluded that it had not shown sufficient effectiveness to “warrant compulsory application for the checking of epidemics”.

It’s worth quoting in full paragraph 4.15 from the UK Influenza Preparedness Strategy 2011 that succinctly encapsulated the scientific and policy consensus:

This conclusion was reaffirmed in the WHO report published in September 2019 that summarised the best available studies to date: “Ten RCTs were included in the meta-analysis, and there was no evidence that face masks are effective in reducing transmission of laboratory-confirmed influenza” (p. 26).

An Australian Department of Health document in July 2020 advised that facemasks are most likely to be effective if worn correctly and consistently (no touching the front of the mask, no pulling it down intermittently – both extremely common real-world behaviour!) for source control when worn by an infected person, but less effective in protecting uninfected people.

Facemasks is the issue on which my trust in the U.S. Centers for Disease Control and Prevention (CDC), which exercises an outsized influence globally, was broken irreparably. The CDC tweeted that during the March-July 2020 period, “universal mask use helped reduce COVID-19 cases, hospitalisations, and deaths” in Delaware. It was telling the truth, but not the whole truth.

The mandate was introduced on April 28th when Delaware had 235 cases (seven-day moving average). On June 30th cases had indeed fallen to 89. But they began to climb again in autumn and on December 12th Delaware had 826 cases: nearly four times as many as when the masks were brought in (Figure 1). Fair enough, you might say, like many others the CDC failed to anticipate the seasonal surge. Except the tweet was sent out on January 6th 2021. This is not a well-intentioned mistake overtaken by events but deliberate dishonesty.

Anthony Fauci, too, shed credibility with his notorious and numerous flip-flops on masks. His attempts to claim the noble lie as his primary motivation for the changing stance, saying he was trying to prioritise masks for healthcare workers and prevent a public run on them, only deepened perceptions of shiftiness.

Firstly, because in fact his initial scepticism accurately reflected the existing consensus, and secondly because he was repeating the same argument in a private email to a friend as well. Missouri Attorney General Eric Schmitt tweeted after Fauci was deposed in November that the good ‘America’s doctor’ was not able to cite a single study to support his pro-mask health advice.

Incidentally, during the deposition Fauci responded to questions with “I don’t recall” an astonishing 174 times. A likely explanation for his convenient amnesia is he knows the truth is not his ally.

Masks dehumanise us and are a potent force for stoking mass fear. In December 2020, a hundred doctors, paediatricians, clinical psychologists and academics wrote an open letter to the U.K. Government warning that requiring masks in schools breached WHO guidelines and were creating a “climate of fear“. Masks should “play no part in the life of healthy children”, they said. In autumn 2021, Scotland introduced mask mandates for schools but England did not, yet weekly cases in both showed broadly similar infection curves.

One of the most valuable sets of observational data is the brilliant series of comparative charts produced by Ian Miller in Unmasked: The Global Failure of Covid Mask Mandates  (2022). The most significant result of the community-wide mask recommendations was twofold: the highly and instantly visible symbol perpetuated and locked in the reign of fear and it demonstrated broad compliance with the effort of governments to exercise population-wide social control.

Ramesh Thakur is Emeritus Professor at the Australian National University’s Crawford School of Public Policy and a former UN Assistant Secretary-General. This article was first published by the Brownstone Institute.

Why Did So Many Academics, Trained to Think Critically, Embrace the Pandemic Narrative?