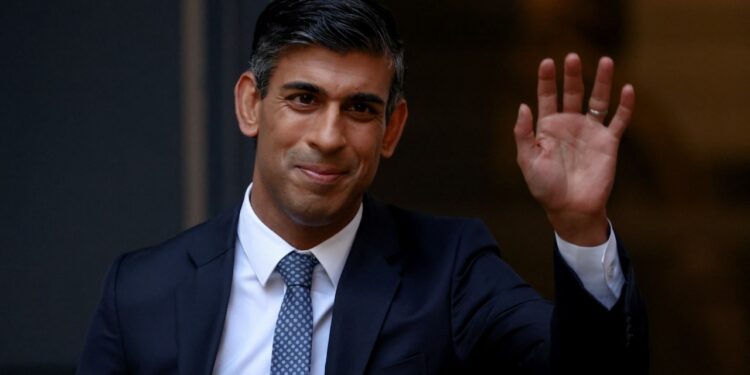 So, Rishi Sunak will shortly be installed as our new Prime Minister – the fifth since 2016. Indeed, Prince Charles is already on his second PM and he hasn’t even been crowned yet, suggesting he may break his mother’s record of appointing 15 during her reign. You wait 70 years for a coronation and then two come along at once!

My email box is filling up with people claiming this is a WEF-orchestrated coup. The evidence is overwhelming, they say. Here’s the Naked Emperor on the case for prosecution:

His father-in-law, Narayana Murthy, is an Indian billionaire and founder of Infosys. In 2005 Narayana was co-chair of the WEF’s annual event, along with Bill Gates. Infosys has partnered with the WEF to deliver digital services which to many look like social credit systems and biometric IDs.

Infosys runs India’s digital ID scheme called Aadhar and Rishi’s wife owns just under 1% of the company. That doesn’t sound a lot but it means she gets £11.5 million in dividends every year.

Mr Sunak’s former hedge fund was heavily invested in Moderna and he refused to say whether he would profit from the Covid vaccine.

We also can conclude that Rishi is the globalists choice by looking at who supported him and what they say.

Tobias Ellwood MP was an early Rishi supporter announcing that “the free market experiment is over and the reset begins” before swiftly deleting his tweet.

Tobias is a member of the Global Thinkers Forum, Chair of the Defence Select Committee and reservist in the 77th Brigade, the secretive section of the British Army’s information warfare unit (Hi guys!). Here he is again calling for a reset.

Two other Rishi supporters are Tom Tugendhat, Chairman of the Foreign Affairs Committee, and Michael Gove, Chief Westminster King Maker, who both attended the Bilderberg meeting in Washington in June this year.

Individual statements or policies can be argued away as conspiracy nonsense or coincidence but put it all together and it is clear that inexperienced Rishi was placed into power a couple of years ago with the intention of pushing an agenda that benefits the few.

You won’t be surprised to hear I don’t buy it. Not just because it assumes that a conclave of puppet masters are responsible for a series of unfortunate political events, ignoring the thousands of variables that are responsible for history unfolding in the way that it does – including the free will of the protagonists – but because there’s a simpler explanation.

Liz Truss lost power because she and Kwasi Kwarteng chose to introduce a mini-budget they’d made no effort to prepare the financial markets for and which probably would have spooked those markets even if they had. They put an energy support package in place that would cost the British Government up to £100 billion, depending on the global energy markets, and proposed to cut taxes by £45 billion without any corresponding cuts in public expenditure, in spite of the fact that inflation is the highest it’s been in 40 years, our national debt is £2.45 trillion (up from £1.8 trillion in March 2020) and we’re almost certainly heading into a recession. Forget the proposal to cut the top rate of tax and scrap the cap on bankers’ bonuses – those supposedly ‘libertarian’ measures were irrelevant. It was the fact that the British Government was going to have to borrow hundreds of billions of pounds without any serious plan to balance the books that sent the currency markets and the bond markets into a tailspin.

There was nothing inevitable about that – Liz and Kwasi could have waited until next Spring to unveil their pro-growth strategy and gone about implementing it in a measured, gradual way instead of springing it on everyone just days after a period of national mourning.

But the events that followed this catastrophic political misjudgement do have an air of inevitability about them: first the U-turn on cutting the top rate of tax, then the defenestration of Kwasi, followed by the appointment of Jeremy Hunt, then the U-turn on not raising corporation tax and the shrinking of the energy support package from two years to six months… how could any Prime Minister survive such a cascade of humiliations?

After she’d been dethroned in these circumstances, Rishi’s coronation also seems unavoidable. Had it been Boris who succeeded her – or, God forbid, Penny Mordaunt – the financial markets would have jack-knived again. Indeed, gilt yields started to rise the moment rumours began circulating that Boris would throw his hat into the ring and didn’t begin to drop until he announced he wouldn’t be standing. I daresay that was an important factor in his decision not to run – if the currency markets and the bond markets rejected him, just as they’d rejected Liz, he’d have no choice but to resign as well.

So what’s the moral of the story? Remainers will argue this proves that take back control was never more than a clever political slogan. The idea that Britain could regain its sovereignty by leaving the European Union was always for the birds, given all the other international forces restricting His Majesty’s Government’s room for manoeuvre, not least the financial markets. Indeed, Jonathan Freedland wrote a column in the Guardian about what he called “the sovereignty delusion” making precisely this point:

Truss and her now ex-chancellor were given the rudest of reminders that in our interdependent world there is no such thing as pure, untrammelled sovereignty. No government can do what the hell it likes, heedless of others. In this case, the restraint on sovereignty was not the EU: it was the money markets. But their verdict was as binding as any Brussels edict; in fact it was more so. They ordered the removal of a chancellor after just 38 days in office and the cancellation of the Government’s economic strategy. It is the financial markets that have taken back control.

There’s a deal of truth in this, but with one important caveat: the money markets probably wouldn’t have reacted in the way they did to the mini-budget if inflation wasn’t approaching double digits and if Britain’s national debt wasn’t 100% of GDP. Freedland blames Brexit for Britain’s straitened economic circumstances, but the actual cause was Boris Johnson and Rishi Sunak’s mishandling of the pandemic. If they hadn’t mothballed the economy for 18 months and borrowed ~£400 billion to pay people not to work our national finances wouldn’t be in such a parlous state and Liz and Kwasi probably would have got away with it. The financial markets didn’t take back control. Boris and Rishi handed it to them when they more or less bankrupted the British economy.

There’s an irony here. Boris and his closes allies reacted in the way they did to the pandemic because, as they saw it, it was the best way to ensure their political survival. I daresay the same calculation was made by most political leaders who rushed to impose lockdowns and then borrowed hundreds of billions to cushion the economic shock. But the result has been a global recession and a grim new financial reality in which political leaders can no longer spend their way out of trouble. So one after another the incumbents are going to fall – and, as in Boris’s cases, their successor’s too. From now on, anything other than brutal austerity won’t be economically feasible, even though it’s politically disastrous. Britain is the canary in the coal mine; soon, every Western country will be like Italy, changing Prime Ministers every five minutes.

Those who see the hand of the WEF or Bilderberg or Bill Gates in all this are not cynics, but romantics. They cannot bring themselves to believe that sheer human folly could have brought us to such a point. Mankind is not so inept, surely? There must be some controlling intelligence directing events, even if it’s malignant. I almost wish that were true, because the truth is even harder to bear — we are the authors of our own downfall. But bear it we must if we’re going to avoid making such a catastrophic mistake again.