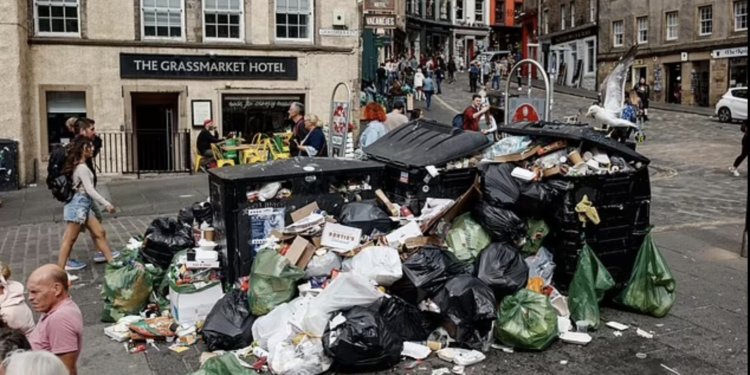 Tom Harris, the former Labour MP for Glasgow South, has written a blistering piece for today’s Daily Mail about the multiple failures of Nicola Sturgeon’s SNP administration. The sheer scale of the Scottish Government’s incompetence is quite breathtaking. It begins:

Edinburgh was once known as the Athens of the North. Today it is Scotland’s rubbish dump.

Nearly a million visitors from across the globe travel to Scotland’s capital every year to sample the cultural delights of the Edinburgh Festival and stroll through the streets of a city blessed with breathtaking architecture, historic monuments and, of course, a mighty fortress.

But this year they have been greeted by the ugly sight of overflowing bins and rotting garbage on every corner, the pungent stench of decay, and – should they be bold enough to order a coffee at a pavement cafe – the sight of rats scurrying among the chairs and tables.

A 12-day strike by refuse collectors in the city means that the seat of the country’s parliament has rarely been in a more parlous state just as the eyes of the world are fixed upon it.

How on earth did it come to this? The answer, of course, lies in Scotland’s politics. If you’re a Scot Nat, you’ll blame the Labour-led Edinburgh City Council for not offering the bin workers a big enough pay rise.

If you’re a Labour supporter, you’ll argue that Nicola Sturgeon’s SNP administration at Holyrood is not funding local authorities generously enough to allow them to settle outstanding pay demands.

If you’re a Conservative, you’ll just breathe a sigh of relief that – for once – your party isn’t in the frame.

Unfortunately for the SNP, this row has blown up just as new economic data showed that every Scot received a record ‘Union dividend’, an average of nearly £2,000 more from the taxpayer than people in the rest of the U.K.

Official Scottish government figures released on Wednesday showed that Scots benefited from an average of £1,963 more public spending in 2021/22 than the U.K. norm, with the gap surging from the previous year’s £1,530.

It all adds up to a summer of discontent north of the border for the SNP, because on Thursday the Unite union served notice of strike action in education and waste services across no fewer than 20 council areas in Scotland.

And these issues are only the latest in a long and embarrassing list of setbacks presided over by Sturgeon and her lieutenants. Indeed, it’s not going too far to say that the record of devolved government in Scotland reads more like a charge sheet than a list of accomplishments.

Only this month, the SNP’s lamentable performance on education was exposed by exam results that showed there has been an abject failure to narrow the attainment gap between schools in better off and poorer areas.

In the health sphere it appears to be incapable of opening new hospitals on schedule, the most egregious example of this being the case of Edinburgh’s Royal Hospital for Children and Young People, which was finally opened in March last year – nine years late.

Meanwhile, a number of those that have been opened have suffered severe teething troubles, with ventilation flaws identified at Glasgow’s £1 billion Queen Elizabeth University Hospital, where two patients, including a 10-year-old boy, died after contracting a rare fungal infection linked to pigeon droppings.

And it’s not only on bread and butter issues that the SNP falls short. Its attempts to procure new ferries to serve Scotland’s island communities have degenerated into farce, with the Glen Sannox – a vessel launched by Sturgeon in 2017 with windows painted on to make the ship appear finished for the occasion – still yet to enter service almost five years later.