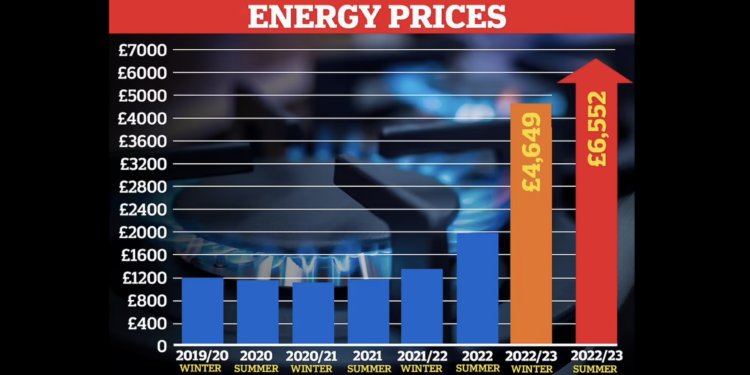 The Wall St Journal’s Editorial Board has written a pithy condemnation of Britain’s Net Zero obsession, holding it directly responsible for the fact that up to a third of Britons are about to be plunged into poverty thanks to unaffordable energy bills. “The underlying cause of Britain’s energy misery is its fixation with climate goals, especially the ambition to achieve net-zero CO2 emissions by 2050,” it says. No argument here.

Americans who fancy themselves net-zero climate advocates might want to take a look at Britain for a guide to the future. Household energy bills were expected to rise 40% this autumn, but on Friday the government regulator announced they’ll leap 80% in a single bound.

This boost follows a 54% rise in April and brings the average household’s annual bill to £3,549 ($4,208). The median household income is £31,400, which gives a sense of the growing proportion of each household’s budget that will go toward central heating, cooking and keeping the lights on. For the ruling Tories, this is a political calamity.

And that’s merely what households will spend directly on energy. Britain is also in the grip of an energy-price crisis for businesses, whose rates aren’t subject to a cap. Some small businesses report they can’t get any utility to supply them without paying a steep deposit up front, because energy companies are concerned that high prices will push more small firms into insolvency. Lower-income households in particular will bear the brunt of this as prices for goods and services skyrocket and companies lay off employees.

If you think this couldn’t happen in America, think again. The underlying cause of Britain’s energy misery is its fixation with climate goals, especially the ambition to achieve net-zero CO2 emissions by 2050. To meet that goal Britain has grown hostile to domestic energy exploration, banning shale-gas fracking and slapping windfall-profits taxes on North Sea oil and gas producers that will deter investment. Russia’s invasion of Ukraine has hurt, but the U.K.’s policies made its citizens vulnerable to such a global shock.

The U.K. is belatedly building new nuclear plants, but those will take years to come online. Unreliable wind and solar raise the cost the electric grid must pay to balance supply and demand when the winds are still and the sun is behind clouds, and more than 80% of English households rely on gas rather than electricity to heat their homes. All of this drives up the cost of supplying power, and then the government adds about £153 in green levies and a 5% consumption tax directly on household bills.

This isn’t all that different from the energy policies the Biden Administration and Democrats in Congress, California and New York are imposing via the Inflation Reduction Act and myriad regulatory assaults on fossil fuels and favors for renewables. Britain’s inane innovation is a price cap that causes disastrous price increases to happen twice a year rather than continuously.

To adapt Hemingway, net zero drives you bankrupt gradually, then suddenly. Britain’s sudden energy agony is a five-alarm warning if the climate progressives continue to have their way.

British Public Falls Out of Love With the NHS