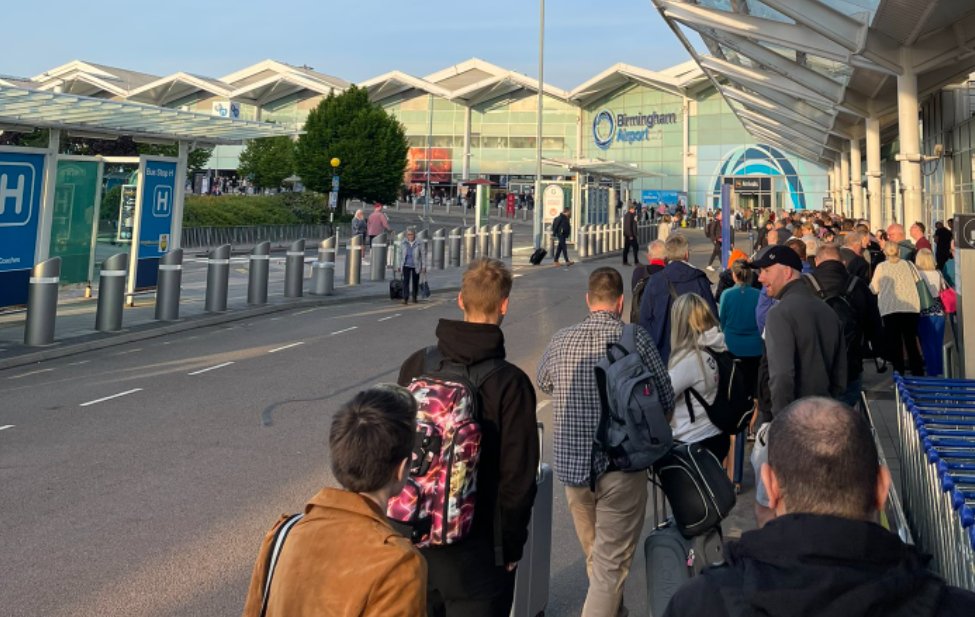 Holidaymakers jetting off today face airport chaos, with delays to flights and queues stretching outside the terminals. MailOnline has more.

Passengers at Manchester Airport say they are facing a two-hour wait at security check-in this morning, with queues leading outside the terminal and into to a nearby car-park.

Meanwhile, at Birmingham Airport, passengers have complained of ‘ridiculous’ queues at departures today, with long queues outside the main terminal building.

There are also delays to flights, with at least ten late flights at Manchester and four at Birmingham as of 8am this morning. Meanwhile at Stansted, there were also claims of two-hour delays at passport control last night.

The reason is that airports laid off almost half their staff during the pandemic, and despite Birmingham saying it began a recruitment drive in November, six months it seems is not long enough to recruit and train replacements for the lost workers. Manchester, however, admitted it only began its recruitment drive last month.

Birmingham Airport chiefs today said the queues were due to ongoing staffing issues, with almost half (43%) of its employees being made redundant during the pandemic. Bosses said the airport had launched a recruitment drive in November and were currently in the process of training new security officers.

A spokesperson for Birmingham Airport told MailOnline: “Half of the 15,000 customers flying out of BHX today were booked to depart in our busy dawn peak, so we took the decision to run queues outside the terminal to avoid them getting tangled with check-in lines. Queues were long but managed and moving. We thank customers for their patience. As always, our message to departing customers is: Help us help you keep queues moving by removing any liquids, gels, pastes and electrical items from your bags before our security X-ray scanners.”

Manchester Airport chiefs meanwhile say they have more than 500 new recruits going through security and vetting following a recruitment drive in April.

“Sixty new recruits have already joined the operation in April, with a further 200 new recruits due to start in May to bolster the workforce ahead of the peak summer season,” an airport spokesperson said last week.

It comes as EasyJet yesterday announced it will be taking out seats on some of its fleet this summer, so that it can fly with fewer crew, due to difficulties with staff shortages. The airline has been struggling to meet the rising demand for travel, as more Brits head abroad now that pandemic restrictions have been lifted.

In a bid to solve this, it is removing the back row from 60 of its A319 jets, which will limit the plane to 150 passengers instead of 156. It means that three crew members can operate the cabin, instead of the usual four. Civil Aviation Authority safety laws require three cabin crew to every 50 seats, irrespective of the number of passengers on the flight.