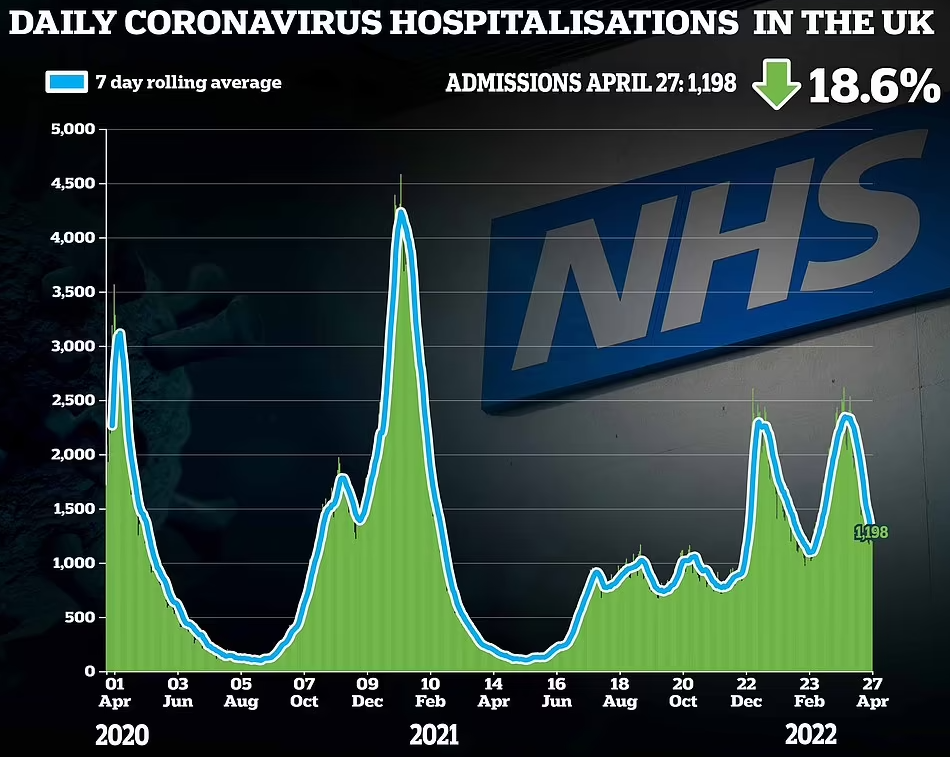 Latest Covid hospital data show there were 1,198 new admissions with Covid in the U.K. on April 27th (60% of which were incidental), which marked a 19% decrease on the previous week and a fall for the 22nd day in a row, as the Omicron BA.2 wave continues to decline. However, news of a rise in reported infections and hospital admissions in South Africa linked to new variants has raised questions of what might come next. MailOnline has more.

A delay to the Government’s dashboard update on bank holiday Monday means today’s stats include four days’ worth of numbers – after ministers stopped publishing the figures on weekends following ‘Freedom Day’.

It shows there were 35,635 new positive Covid tests over the last four days, working out at an average of just 8,900 daily cases since Friday. There were also 407 total deaths, equivalent of just over 100 daily.

Case numbers logged by the central testing scheme are becoming increasingly unreliable now that free swabs have been stopped for the vast majority of Britons.

Meanwhile, latest Covid hospital data show there were 1,198 new admissions for the virus on April 27th, which marked a near-19% decrease on the previous week.

Daily hospitalisations have now fallen for 22 days in a row – despite NHS leaders calling for masks and outdoor mixing to return just weeks ago.

Pressure is mounting on the U.K. to scrap its daily Covid stats after Ireland said it would discontinue its updates in the coming weeks.

Meanwhile, South Africa has once again become a focal point of the pandemic amid a fresh Covid surge of new subvariants. Covid cases have nearly quadrupled in a month nationally and hospital admissions are ticking up in Gauteng province, the former epicentre of the original Omicron wave.

The world watched in horror last November as the super-infectious Omicron strain (BA.1) spread through South Africa at unprecedented speed – which turned out to be mild. But now the country finds itself at the cusp of a fresh explosion in infections, this time due to sub-strains that appear even more transmissible and resistant to antibodies.

Researchers on the ground in South Africa say the BA.4 and BA.5 subvariants can evade immunity and cause symptoms in people who were infected with their parent strain just months ago. What is still unclear is whether the new wave will create milder or more severe illness — but experts tell MailOnline the former is more likely, for the U.K. at least. 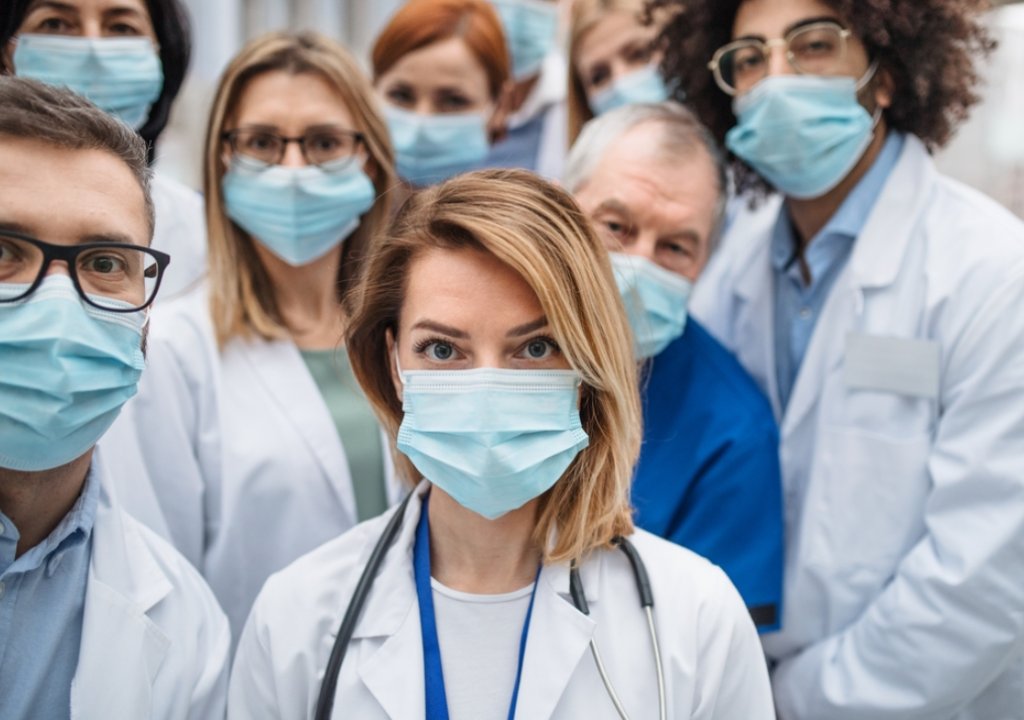 Dr. Gary Sidley, a former NHS Consultant Psychologist and co-founder of Smile Free, has a piece in the Critic today criticising the persistence of widespread masking in healthcare settings and summarising the evidence for why masks are a bad idea.

Over recent weeks there has been a marked reduction in the number of people wearing face coverings in retail settings, hospitality venues and on public transport. Given the ineffectiveness of masks in reducing viral transmission, together with the multiple harms associated with them, this transition is both rational and welcome. Paradoxically, the prominent exceptions to this return to a mask-free society are NHS facilities and venues allied to health. Widespread masking of both staff and patrons persists in all hospitals, health centres and GP practices, and most dentists, opticians and pharmacies.

A sphere of society where one might reasonably expect a reliance upon evidence-based practice, is now the outlier in persisting with the unscientific and pervasively damaging mass-masking phenomenon. More troublingly, healthcare’s insistence that staff and visitors continue to wear masks constitutes additional risks to the wellbeing of the people who use these services. Some of the general harms of face coverings are likely to be particularly problematic in these settings, including:

Clear communication is a central requirement for effective healthcare. By muffling speech and hiding non-verbal signals, masks significantly impede the efficiency of information sharing, potentially impairing the professional’s understanding of the clinical problem and the patient’s understanding of the recommended therapeutic intervention. Those with hearing impairment (estimated to be about one-in-six of the UK population), who often rely on lip-reading, will suffer the most. Given that the elderly population are frequent users of health services, those impacted by this mask-induced communication problem will be even higher in these settings. And the consequences of muffled speech in hospitals can sometimes be catastrophic.

Increased risk of falls in the elderly

By blocking parts of the lower peripheral visual field, and causing spectacles to steam up, masks will increase the risk of falls in older people with ongoing mobility difficulties. Injuries, such as fractured femurs, are more prevalent in the elderly. Expecting face coverings from this demographic, the most regular visitors to healthcare facilities, can only exacerbate the risk.

For patients with existing respiratory problems, the requirement to cover their airways with cloth or plastic will often inflict additional distress. Masks can make breathing more difficult, a problem likely to be more apparent after long periods of wear, such as those routinely experienced in hospital Accident and Emergency departments. Furthermore, face coverings can inflate the risk of acquiring pneumonia and other respiratory diseases. One study found for example that as little as four hours of wearing a cloth or plastic mask increased vulnerability to bacterial infection. There are also the largely unknown risks from the inhalation of micro-plastics and the exposure to contaminants in the textiles.

Stop Press: Double-masking offers people no more protection than single-masking and may increase their risk of becoming infected, according to a new study from Johns Hopkins University and Florida State University. MailOnline has more. 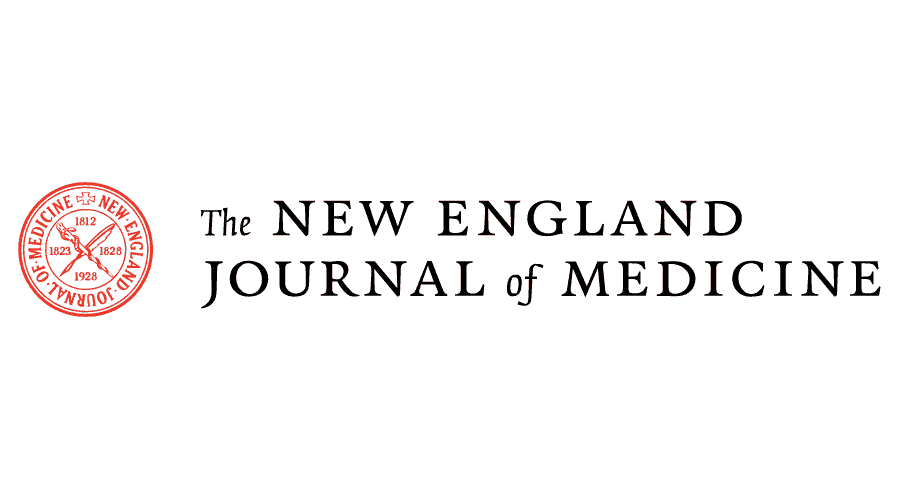 The idea is that, for certain classes of pathogen, the immune system’s response to any particular exposure depends on an individual’s first exposure. If two versions of a pathogen, A and B, are circulating in a population, individuals who were first exposed to A may develop weaker immunity against B, and vice versa.

There is substantial evidence that original antigenic sin applies to influenza: those who gain immunity to one strain of influenza may develop weaker immunity to other strains.

It can also apply to vaccines. As a recent review notes, “if we only immunise to a single strain or epitope, and if that strain/epitope changes over time, then the immune system is unable to mount an accurate secondary response.”

At the end of last year, ‘mainstream’ commentators began discussing the possibility that original antigenic sin applies to the Covid vaccines. If it does, we may have vaccinated millions of young people against a version of Covid that poses little risk to them, at the cost of weakening their immunity to subsequent variants.

Now ‘original antigenic sin’ has been mentioned in the context of Covid vaccines in the pages of the New England Journal of Medicine – the world’s most ‘prestigious’ medical journal. 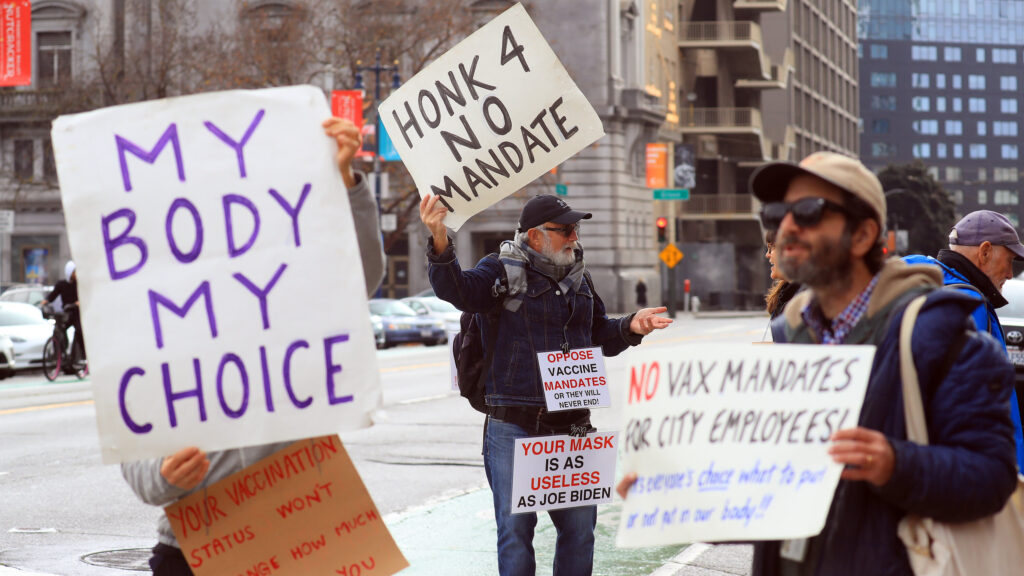 There follows a guest post by Dr. Raminder Mulla, Amy Willows and Rusere Shoniwa, who decided that rather than just listen to the lazy stereotypes of sceptics portrayed in the press, academia and Government, they would go and find out what people actually thought.

“Anti-vaxxers want to kill your babies,” screamed the ‘Fleet Street Fox’ in a September 2021 opinion piece for the Mirror. “These people are terrorists” she added, as if baby killing alone was insufficient to evoke searing hatred against a minority of people whose real crime was merely opting out of a medical treatment – a right codified after the Nuremberg trials to prevent a repeat of the crimes committed by Nazi doctors in World War II German concentration camps.

Such headlines arguably constitute the crime of incitement to violence. After all, if there was a gang of baby killers on the loose, many might justifiably regard it as their civic duty to halt them at all costs. And history teaches us that vigilantism can be highly imaginative and resourceful once the fire has been lit.

Giving an academic veneer to the kind of wild-eyed claims made by the Fleet Street Fox, a January 2021 study by Miguel et al concluded that people who eschewed compliance with Covid containment measures were more likely to display “lower levels of empathy and higher levels of callousness, deceitfulness, and risk-taking”.

Is there any truth in this? Prompted by a desire to foster genuine understanding between different sides of the Covid camp, a new study led by Dr. Raminder Mulla digs into this question. “Looking Into Their Eyes“, a riposte to the slogan deployed in the Government Covid safety campaign, asks dissidents of lockdown, mask, and vaccine mandate narratives to express their motivations, feelings, and thoughts in their own words.

Looking into their Eyes: Covid Narrative Dissidents in Their Own WordsRead More 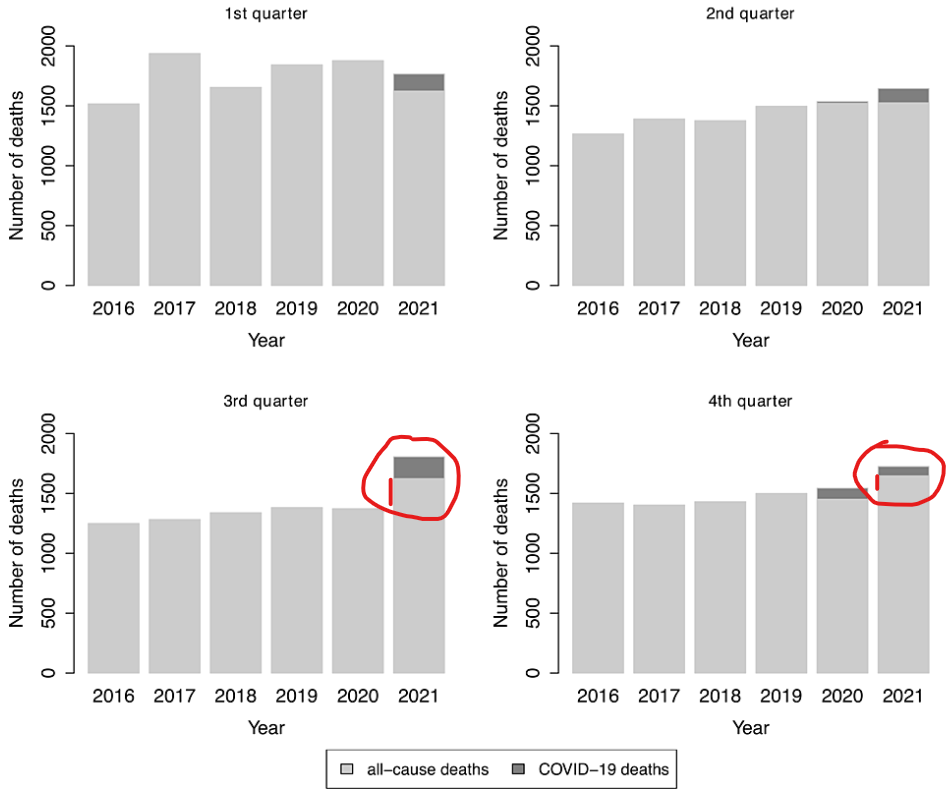 Authorities should “comprehensively” investigate a spike in deaths in Cyprus during 2021 that is not explained by COVID-19 but occurred concurrently with the vaccination campaign, a study has concluded.

The peer-reviewed study in the journal Cureus analysed information reported by the Cyprus Ministry of Health to the European Statistical Office (Eurostat), which includes weekly all-cause mortality for 2016-2021, and data collected by the European Centre for Disease Prevention and Control regarding daily reported COVID-19 infections and deaths.

Spike in Deaths Concurrent With Vaccinations Must Be Investigated by Authorities, Study SaysRead More