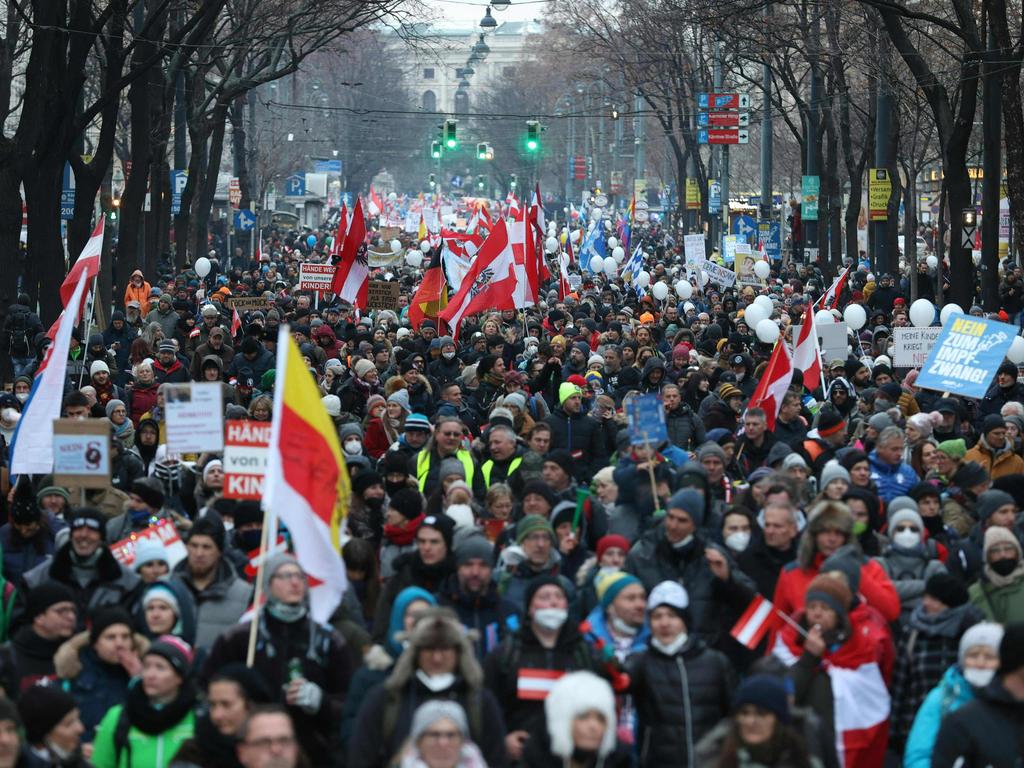 I’m going to say it. I’m unvaccinated. There. I said it. That feels better.

I’m saying this now because for the last year in Austria, where I live, the hypocrisy, discrimination, and name-calling have risen to levels that we haven’t seen in a long, long time, certainly in my memory. That I choose not to get vaccinated is simply my choice and that’s it. I have never once suggested that anybody else should follow suit. I am writing this now because I am simply tired of repeating myself on a daily basis; tired of having to defend my decisions to people for whom my decisions are no business whatsoever. I am saying this now because:

In Austria, according to a recent survey, the vast majority of the population believe their Government to be corrupt. We have had four Prime Ministers in one year. In Vienna, if I have a negative test and no symptoms, I am still not allowed into a shoe shop to buy my three-year-old son a pair of shoes because the Government has decided that shoes are nonessential items. In fact, an unvaccinated person has not been granted access to hairdressers, cafés, bars, restaurants, theatres, cinemas and so on since late October. In order to continue earning a living, an unvaccinated person has had to provide a negative test every 48 hours. In the meantime, the vaccinated, who are not required to test, even if they have symptoms, have had free rein. And the numbers have continued to rise, and the unvaccinated blamed.

What is more, the Government has now announced a €1.4 billion lottery scheme to reward people for getting vaccinated with a vaccine that seemingly has only 30% efficacy against the current variant. These are the same taxpayers who were locked down on four separate occasions because hospitals could not cope with the numbers. So instead of helping the nurses and doctors, funding more beds, providing after-school programmes that were cancelled in the last two years, the money is going to the individual to be used as vouchers as they wish.

This is also a country that has passed a law to force people to get the aforementioned vaccines. It also requires people entering the country to show proof of a booster. Evidence has already shown that the booster is only effective against infection for 10 weeks at best. Yet without two vaccinations and a booster, you’re not allowed to have a haircut in Austria. The mandate for the vaccine comes into effect at precisely the same time as other European nations are dropping most, if not all of their measures, and fines will begin to be issued at the same time Pfizer rolls out the Omicron vaccine. At the time of writing, the legislation has been passed in the Lower and Upper Houses of Parliament. It still needs to get through the Constitutional Court which, typically, can take up to four months. It remains unclear how penalties are going to be enforced and by whom. What is clear is that these penalties cannot be realistically implemented by the middle of March as suggested by the Chancellor. The Government has conceded that it hopes the threat of such measures will achieve a high enough vaccine take-up that such enforcement will then be redundant – a desperate tactic to force a vaccination on a population that, even with these penalties and threats, is reluctant to accept it.

I am writing this to explain that the situation we are all going through is not simply black-and-white. I cannot recall a time when we have been so divided as a society. I blame social media for that and I blame mainstream media and their fear agenda. When people cast a vote nowadays, you get a sticker and post a picture online. When you get vaccinated, you change your Facebook profile picture, announce it to your Instagram followers, post a photo of the Band-Aid on the upper arm. In return you get some likes and some clapping hand emojis. And that’s it. Suddenly you are socially protected. Nobody can call you names or accuse you of being selfish or not contributing to the greater good. And whether deep down you have your suspicions, or regrets, or you secretly agree with people like me taking a stand against a totalitarian response to a virus, you can at least take some comfort in knowing you had a choice and chose as you deemed appropriate. I respect your decision. Maybe it’s time to afford others the same respect. In the meantime, shine a light on the Austrian Government because it is setting a very, very dangerous precedent.