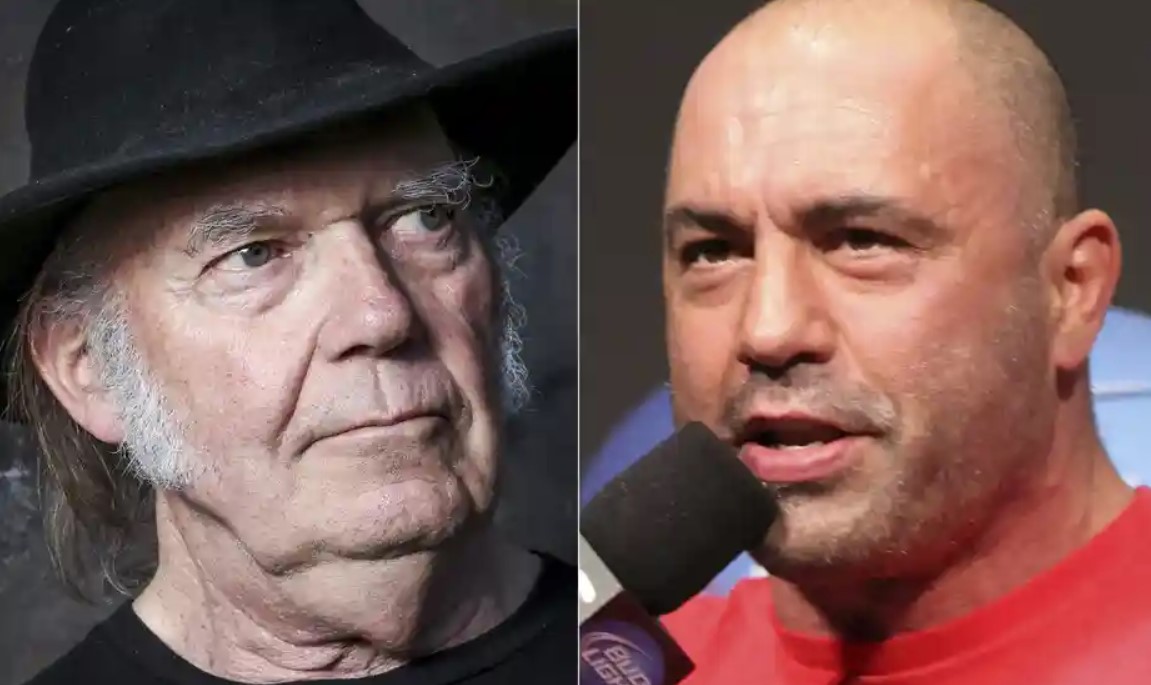 Wrinkly rocker Neil Young told Spotify to choose between him and hit podcast host Joe Rogan over alleged Covid misinformation – and the streaming service has chosen Rogan, saying it has a responsibility to balance safety and freedom. The Guardian has more.

The music streaming platform Spotify is in the process of removing Neil Young’s music after the company refused to take down Joe Rogan’s podcast amid the musician’s objections that it spread vaccine misinformation.

Rogan has been described by the New York Times as “one of the most consumed media products on the planet”. His podcast, The Joe Rogan Experience, is Spotify’s most popular. In 2020, Rogan signed a $100m deal that gave the streaming company exclusive rights to the show.

But this week, Young posted an open letter to his manager and record label that was later taken down in which he said: “With an estimated 11 million listeners per episode, [The Joe Rogan Experience], which is hosted exclusively on Spotify, is the world’s largest podcast and has tremendous influence. Spotify has a responsibility to mitigate the spread of misinformation on its platform, though the company presently has no misinformation policy.”

The musician added: “I want you to let Spotify know immediately TODAY that I want all my music off their platform … They can have Rogan or Young. Not both.”

A Spotify spokesperson confirmed to the Hollywood Reporter on Wednesday that the platform was taking down Young’s music.

“We want all the world’s music and audio content to be available to Spotify users. With that comes great responsibility in balancing both safety for listeners and freedom for creators. We have detailed content policies in place and we’ve removed over 20,000 podcast episodes related to Covid since the start of the pandemic. We regret Neil’s decision to remove his music from Spotify, but hope to welcome him back soon,” the spokesperson said.

Since the pandemic, Rogan, who has legions of devoted followers, has repeatedly spread misleading and false claims. This month, 270 doctors, scientists, healthcare professionals and professors wrote an open letter to Spotify, expressing concern about medical misinformation on Rogan’s podcast.

The letter highlighted a highly controversial episode from December that features Robert Malone, a virologist who was involved in the mRNA vaccine technology that led to some of the leading COVID-19 vaccines but has since been criticised for spreading vaccine misinformation.

“This is not only a scientific or medical concern; it is a sociological issue of devastating proportions and Spotify is responsible for allowing this activity to thrive on its platform,” the letter read.

In the wake of the catalogue deletion announcement, Young posted a new message on his website further castigating Spotify as “the home of life-threatening Covid misinformation. Selling lies for money.”

He said he made the decision because of worries that young Spotify users were “impressionable and easy to swing to the wrong side of the truth. These people believe Spotify would never present grossly unfactual information. They unfortunately are wrong. I knew I had to try to point that out.”

Young said the decision – which is supported by his Warner Bros-owned record label, which controls his music – would cost him 60% of his worldwide streaming income.

All that in order to get a fellow entertainer sacked over disagreeing with some of his guests’ views.

The specific allegations against Rogan are somewhat obscure. The only one mentioned in the Guardian article above is that he hosted Dr. Robert Malone in December – an eminent scientist with a background in mRNA technology who happens to be sceptical about these particular vaccines, not least because he himself almost died of a reaction to his second jab. What a truly odd thing to take a costly stand over.

The Guardian‘s unqualified statement that Rogan “has repeatedly spread misleading and false claims” would also seem libellous. If you follow the link supposedly backing up this smear it takes you to a December 2020 Guardian article which cites as its first example that “one of Rogan’s guests suggested the virus may have been ‘enhanced’ and escaped from a lab”. Fancy that. That example didn’t age well. The only other piece of pandemic-related ‘misinformation’ cited is Elon Musk’s claim on Rogan’s show in May 2020 that hospitals were over-counting Covid hospital patients and deaths and had a financial incentive to do so. Given this issue is now widely recognised it’s hard to see it as ‘misinformation’ worth going to the stake over. Why take such drastic action on such a flimsy charge sheet?

Refreshing to see a corporation resisting pressure to cancel someone regarded as out of step with the mainstream. Let’s hope the boycott fizzles out now and doesn’t escalate and make life difficult for Spotify.

In related news, the left-wing rag the Washington Post is trying to make trouble for Substack for hosting people the newspaper labels “anti-vaxxers”. Substack CEO Chris Best, apparently responding, wrote in a blog post a defence of the importance of free speech and tolerance that Neil Young and others reaching for the cancel button would do well to heed:

While we have content guidelines that allow us to protect the platform at the extremes, we will always view censorship as a last resort, because we believe open discourse is better for writers and better for society.

This position has some uncomfortable consequences. It means we allow writers to publish what they want and readers to decide for themselves what to read, even when that content is wrong or offensive, and even when it means putting up with the presence of writers with whom we strongly disagree. But we believe this approach is a necessary precondition for building trust in the information ecosystem as a whole. The more that powerful institutions attempt to control what can and cannot be said in public, the more people there will be who are ready to create alternative narratives about what’s ‘true’, spurred by a belief that there’s a conspiracy to suppress important information. When you look at the data, it is clear that these effects are already in full force in society.