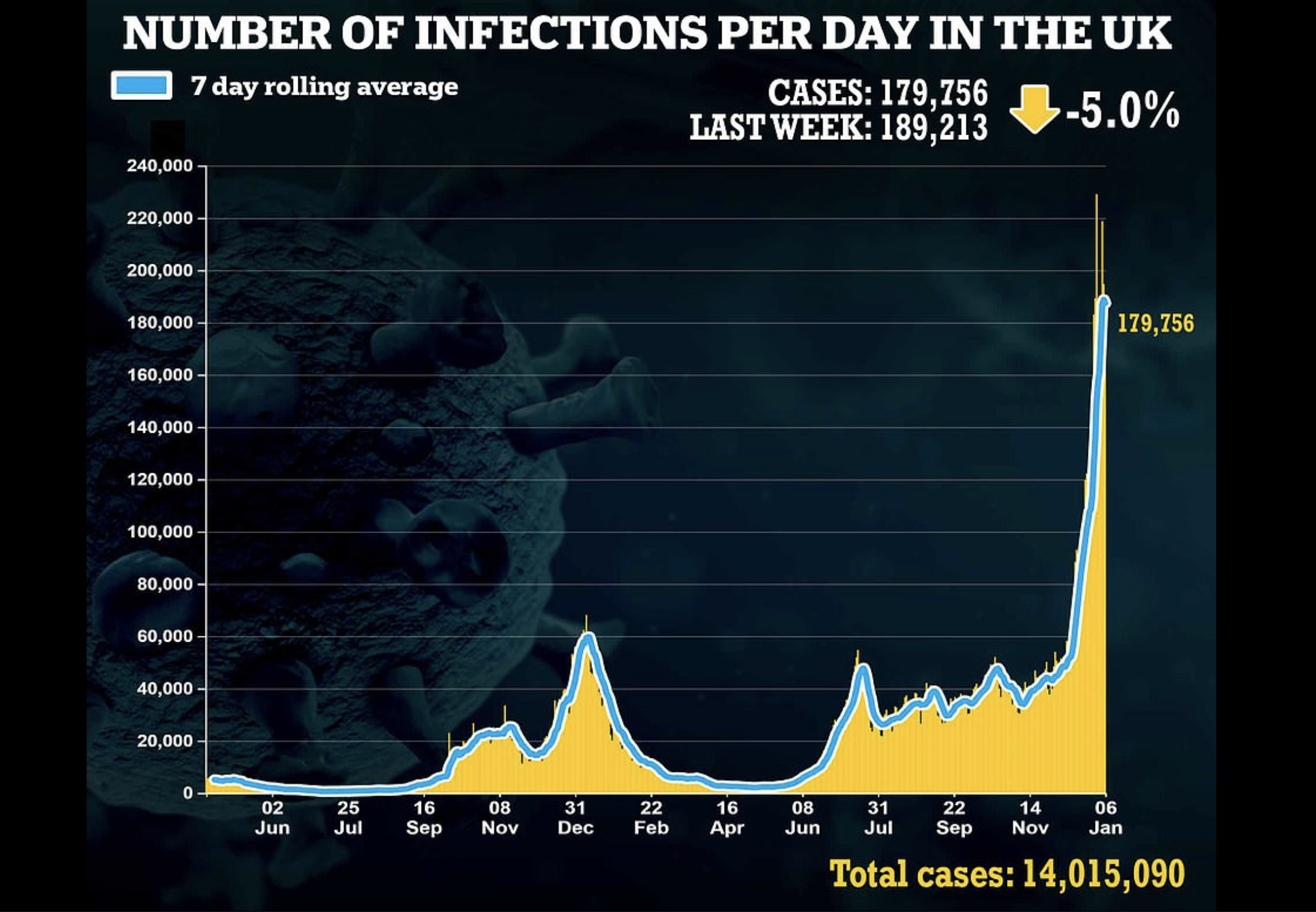 Britain’s daily Covid cases fell for the first time in a month today, deaths declined by 30.4% week-on-week and hospitalisations dropped in London. Meanwhile, Government ministers claimed the Omicron-fuelled staffing crisis in the NHS will be “short-lived”. It looks like Boris’s optimistic prediction in the House of Commons yesterday, in which he speculated we would be back to normal in three weeks, was on the money. Maybe he should join SPI-M! MailOnline has more.

Department of Health figures show another 179,756 Covid cases were recorded over the last 24 hours, down slightly on the 189,213 reported last week.

The drop has likely been helped by the fact two days’ worth of cases were reported in Wales last Thursday, making today’s drop appear steeper.

In England, infections rose 4% over the same period to 152,306. But the small rise may indicate they are starting to flatten in the country, amid a growing body of data showing the capital’s cases are ‘slowing down’.

Latest hospital data showed another 2,078 Covid patients were admitted to U.K. wards on January 6th, which was up 38% on a week ago. Another 231 deaths were also recorded, down 30% on last week.

But in London – which was first to be struck by the Omicron wave – admissions fell 19% in seven days from 456 to 367 a day, marking the fourth day in a row that they’ve tumbled week-on-week.

Even NHS leaders now say there are signs admissions in the capital may be peaking, however, experts note that cases are still rising in the over-60s who are most vulnerable to severe disease.

While the Prime Minister accepted the health service was “under huge pressure”, he said it was “not true” that it could be overwhelmed because so many staff are off isolating with Covid.

He said staff numbers had been increased – about 6,000 more doctors and 10,000 nurses were hired during the pandemic – which should ease the strain, combined with the NHS’ volunteer army of trainee and retired medics.

Earlier, George Eustice, the Environment Secretary, claimed the current NHS crisis would be “short-lived” and Grant Shapps, the Transport Secretary, said the situation was “not unusual” for winter.

Mr. Johnson has held his nerve despite calls for tougher restrictions to tackle Omicron, unlike his counterparts in Scotland and Wales, winning him praise from Tory MPs. …

In London, which is weeks ahead of the rest of the UK in its Omicron outbreak, hospital admissions fell for the fourth day in a row.

There were 367 Covid hospitalisations on January 4th, the latest date with data, marking a 20% fall on the previous week and the largest week-on-week drop yet.

Fewer than 400 people are now being admitted in the capital on average each day compared to around 900 at the peak of the second wave last January.

Signs that the crisis has peaked in just three weeks in London will raise hope that the situation in the rest of the country follows a similar trajectory.

Pillar 2 positivity has also fallen for the first time (see chart below from Prof Anthony Brookes, plotted using Government data) – which, if it is a peak, is at a lower level than last year, despite ONS data suggesting community infection rates are much higher. This may be because of the much greater level of testing than a year ago, which was before LFTs were made widely available. Deaths currently remain 90% below last year’s peak.