Omicron is Not ‘Surging’, Boris. There’s a Ton More Testing – and Infections Are Already Peaking 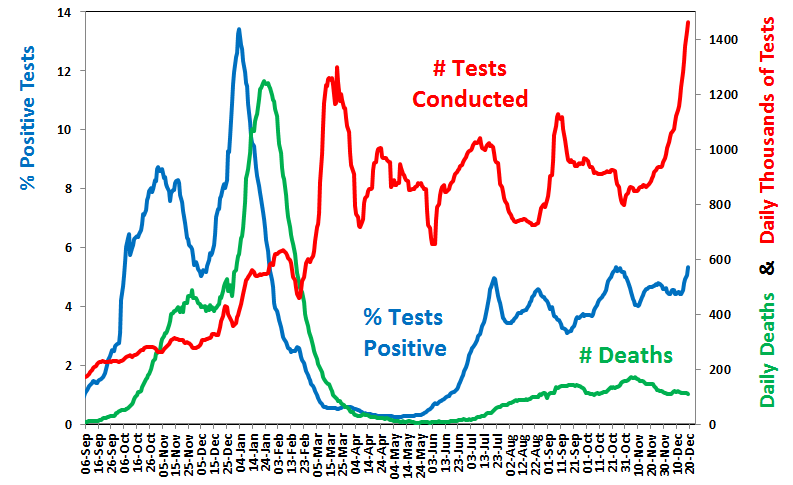 Boris Johnson said yesterday that Omicron is “surging across the country now” and warned that “we reserve the possibility of taking further action to protect the public and to protect public health, to protect the NHS. We won’t hesitate to take that action.” The Telegraph reports.

The Prime Minister has said the Government “reserves the possibility” to implement further Covid restrictions amid surging Omicron cases, and warned that the current situation is “extremely difficult”.

Speaking in Downing Street, Boris Johnson said the latest data will be kept under constant review “hour by hour”, and refused to rule out further measures after Christmas.

“We will have to reserve the possibility of taking further action to protect the public and to protect public health, to protect the NHS,” he said. “We won’t hesitate to take that action.”

Asked about what types of restrictions could be reimplemented, he said: “We are looking at all kinds of things to keep Omicron under control and we will rule nothing out.”

But is it really true that Omicron is surging and warrants the Prime Minister breaking his repeated promise that the lifting of restrictions in the summer following the vaccine rollout was “irreversible”?

Not according to the latest data. Yesterday’s reported infections for the U.K. were at 91,743, down from three days ago.

The peak by specimen date is still December 15th and the figures for the following days, while incomplete, do not suggest it will be topped soon.

December 15th was 10 days before Christmas. Given that people have to isolate for 10 days if positive, this suggests the peak may be largely an artefact of people getting tested ahead of Christmas. The leap in testing on that day is also indicative of this.

In this regard it is similar to the spike in tests and positives that occurred ahead of the summer break in July. That quickly dropped off as schools broke up and people went off on summer holidays. We may well see a similar phenomenon now that schools have broken up and people go away or to family for Christmas.

Most of the recent spike in positive tests is an artefact of the increase in testing. While the positivity rate in the U.K. saw a modest rise in the past week, up to 5.3% on December 19th from 4.4% on the 14th (see graph at top), it is not yet any higher than it was in October, and far below last winter’s peak of 13.5%. No reason to panic there. Deaths also continue their downward trend. How does data like this warrant the return of draconian ‘last resort’ social restrictions?

Rather than causing a large new epidemic or surge, Omicron appears largely to be replacing Delta for the winter wave – though Delta is still retaining some market share for now.

Meanwhile in the original epicentre of the Omicron outbreak, Gauteng province in South Africa, reported infections have been falling sharply in the past week.

National data from South Africa also continues to show a much milder disease, with ICU admissions currently at 21% of their July peak, or 79% lower.

This mildness has been confirmed by new data from Denmark, which finds the hospitalisation rate from Omicron 60% lower than from other variants.

Perhaps it should not come as a surprise, then, to hear that South Africa’s Ministerial Advisory Committee on COVID-19, which is similar to SAGE, has written to the Health Minister Joe Phaahla recommending that the quarantining of contacts and all contact tracing be halted with immediate effect. It is no longer necessary and too costly for individuals and society for too little benefit, they argue.

We have learned more about the manner in which COVID-19 is spread, and also now have to contend with variants of concern whose epidemiology differs from that of the ancestral strains of SARS-CoV-2.

Crucially, it appears that efforts to eliminate and/or contain the virus are not likely to be successful. Therefore, it is critical that the role of containment efforts like quarantine and contact tracing is re-evaluated.

In addition, among the small proportion of symptomatic cases, testing is far from universal, since patients may not seek testing when their symptoms are mild and when testing would be burdensome and expensive. Furthermore, the SARS-CoV-2 test sensitivity is suboptimal, sometimes leading to false negative results.

The inability of the current testing strategy to identify the bulk of cases is illustrated by the high SARS-CoV-2 seropositivity rates seen across multiple provinces in serosurveys, implying that only a fraction of cases (perhaps one in 10, or even less) are ever diagnosed.

Boris’s support base is collapsing as even once-loyal Ministers desert him over his apparent addiction to lockdown restrictions. Yet he is deaf to their pleas and seems only to have ears for the doom-mongers of SAGE. Government modeller Professor Graham Medley revealed on Saturday they didn’t model more positive outcomes for Omicron because they weren’t asked to. Who didn’t ask them to, and why not? Boris has many enemies, and he is only making his position worse by alienating his natural supporters while heeding the advice and adopting the policies of those who would gladly see him gone.

Time to wise up, Boris, and start listening to the right people. Omicron is not “surging”, and neither is it a cause for panic. You just need to keep calm and carry on.