Omicron Surge is Mostly Due to Ramping Up Testing and May Already Be Peaking, Data Shows 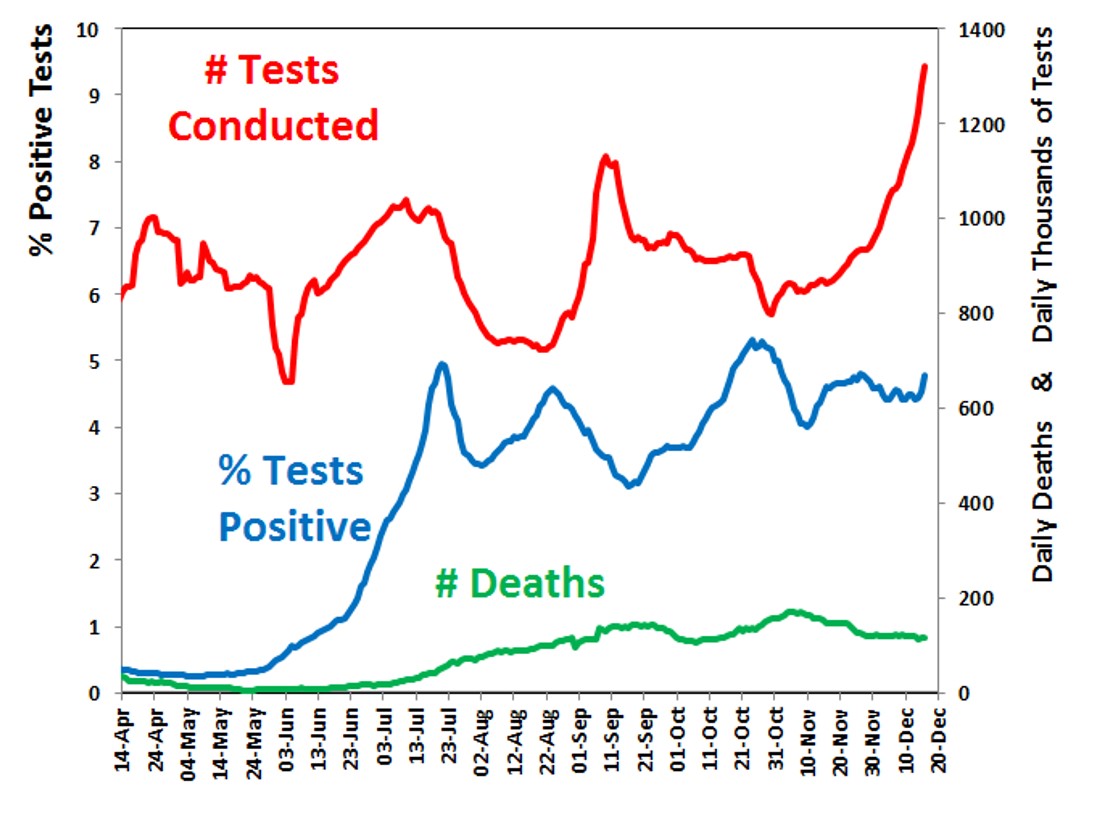 Looking at the data regionally, the spike is currently much more pronounced in London, the South East, the East of England, the East Midlands and the North West than it is in the North East, Yorkshire and the Humber, the South West and the West Midlands.

It’s not clear at this point if it is going to continue to rise, though the last three days’ counts don’t appear to indicate continued sharp growth.

It is also so far largely an artefact of massively increased testing, as the graph above with data for the U.K. up to December 16th shows.

Similar is true for Scotland. Positive tests have spiked.

But positivity is up only a little due to the large increase in testing.

How significant is it that the spike began on Monday December 13th, the day after Boris Johnson’s Sunday press conference when he warned everyone about Omicron and told them to get their booster jab? There was a huge surge in demand for booster doses starting that Monday and continuing throughout the week. Could the fact that this surge coincided with a similar surge in both testing and positive tests be more than coincidence? Perhaps people got tested before getting their booster, or just because of the dire warning of a new threat.

We would normally expect a spike in winter viral illness at this point in December, so there is nothing particularly unusual about it. In this regard, it’s worth noting that the Covid deaths trend for the U.K. is currently very similar to normal winter flu deaths at this time of year.

However, the recent announcement of the Omicron variant raises the question of the role it might be playing in the surge.

UKHSA has begun publishing a daily Omicron update. Friday’s shows a sharp increase since December 6th in the percentage of positive PCR tests with both S-gene dropout (SGTF, in purple below) and low Ct (under 30), interpreted as Omicron, reaching a majority of low-Ct PCR positives in England on December 14th at 54.2%.

Note, however, that the sample of low-Ct PCR positives used for this data will not be representative of the wider positives from the same day. Consider December 13th, the day the spike began, with reported infections in London (by specimen date) doubling literally overnight from around 10,000 on the 12th to around 20,000 on the 13th. The above chart shows that of these 20,000 positive tests, only about 5,000, or a quarter, were PCR positives with Ct under 30, and so able to show S-gene either present or absent. The other three quarters were either PCR positives with Ct over 30, so very unlikely to be infectious and possibly false positives, or LFT positives. We aren’t told the breakdown of these test types for London, but nationally around three quarters of positives came from PCR tests on that day and a quarter came from LFTs. This gives an approximate breakdown for December 13th in London of 5,000 low-Ct PCR positives, 10,000 high-Ct PCR positives and 5,000 LFT positives. With around two thirds of PCR positives having high-Ct above 30 (so low infectiousness), this may be an indication that the spike is being driven by a lot of people getting tested just over 10 days ahead of Christmas, ‘just in case’.

While Omicron (or at least S-gene dropout) was found to be 74% of the 5,000 high-Ct PCR positives in London on December 13th, it is very unlikely to be anything like 74% of the other 15,000 positives from that day, as Omicron is a new fast-spreading infection so the large majority of its positives will be low-Ct. This means we can’t assume that 74% of all 20,000 positive test samples in London that day were Omicron, just because 74% of the quarter of positive samples that were low-Ct PCR positives were Omicron. In other words, 74% is likely a large overestimate of the proportion of London positive tests on December 13th that were Omicron.

Along with the large increase in testing at the same time, this suggests the impact of Omicron on the real infection rate is being significantly exaggerated in the raw data. A more accurate picture would probably show Omicron in the process of quickly replacing Delta while also causing a modest seasonal spike in infections, as seen in the positivity rate, but not something as dramatic as the raw positive test data suggests.

How long will the Omicron winter spike last? There is some evidence it might be peaking already. The graph below shows Omicron samples by region and per day that have been confirmed by genomic sequencing (a subset of the S-gene dropout samples from the graph above).

Note the sharp drop in numbers in London and the South East from December 12th. If this is in any way representative of the real viral incidence (and the way the graph is presented as an “epidemiology curve” suggests it should be, though it is possible it is misleading in that regard) then it shows an outbreak already running out of steam in London and the South East.

Is this a bit optimistic? Not necessarily. The latest data from South Africa also shows a slowing outbreak. Here is daily reported infection data from the original epicentre in Gauteng province.

And here’s the positivity rate nationally.

South Africa delivered some positive news on the Omicron coronavirus variant on Friday, reporting a much lower rate of hospital admissions and signs that the wave of infections may be peaking.

Only 1.7% of identified COVID-19 cases were admitted to hospital in the second week of infections in the fourth wave, compared with 19% in the same week of the third Delta-driven wave, South African Health Minister Joe Phaahla said at a press conference.

One possibility is that Omicron represents SARS-CoV-2’s transition to join its fellow coronaviruses as a cause of the common cold. That’s the golden scenario, and it’s not looking impossible right now.

Even if that’s getting ahead of ourselves, it’s clear that we are over-reacting to Omicron and need to dial down the panic before we ruin another Christmas.

The Ongoing Indoctrination of Teachers