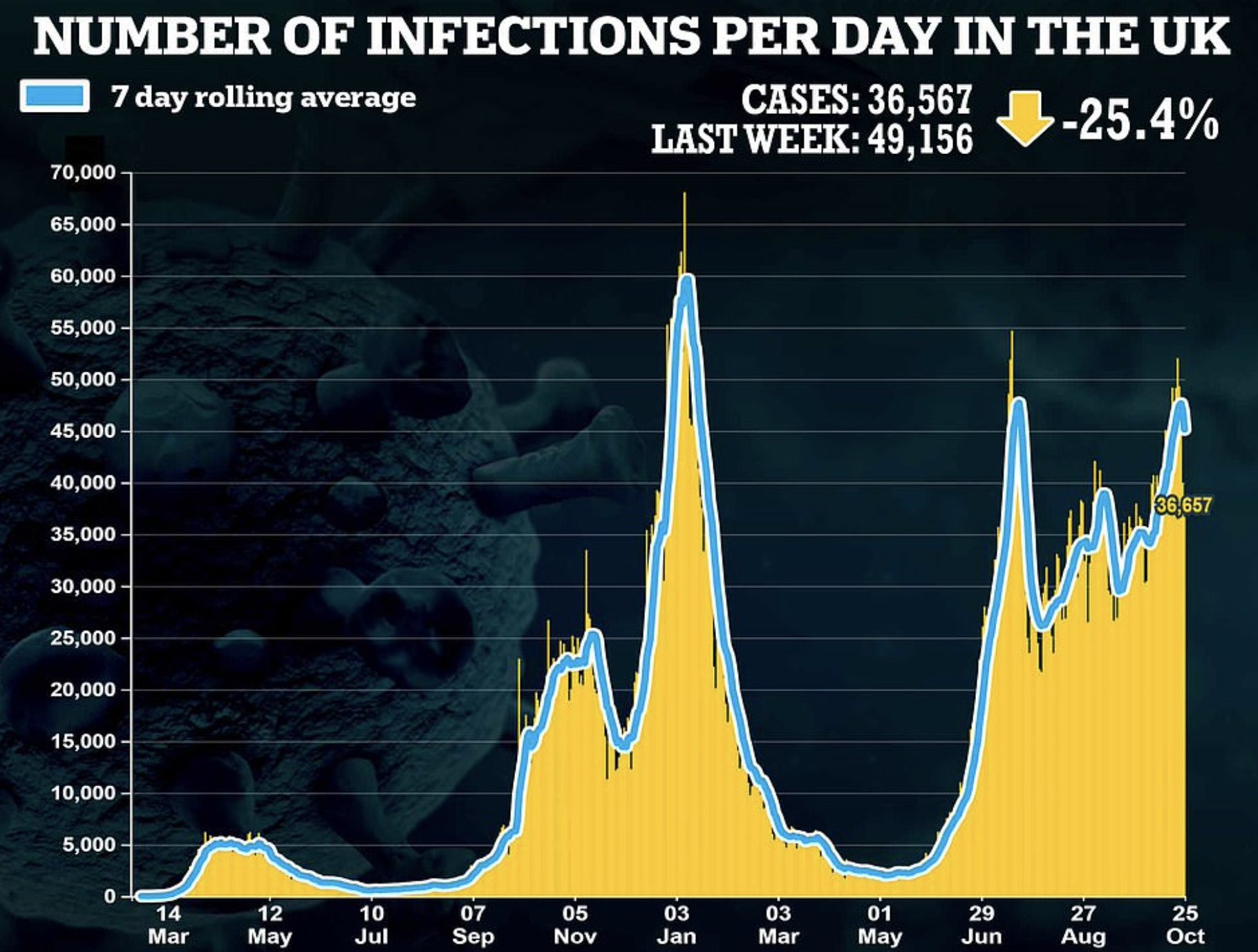 Daily Covid infections in Britain have fallen again and deaths are also down, easing the pressure for the Government to implement ‘Plan B’. MailOnline has more.

The Department of Health reported 36,657 new cases in the past 24 hours, down a quarter on the figure last week and the second day in a row there has been a week-on-week drop. Cases had risen for 18 days prior to Sunday.

Many experts predicted that the October half-term – which for many schools began today – would drag infection rates down and act as a miniature ‘firebreaker’.

There were also 38 coronavirus deaths registered today, down around 16% on the toll last Monday. U.K.-wide hospital data isn’t due until tomorrow.

A technical issue means the promising statistics do not include data from Wales, which is recording on average 3,200 daily cases and nine deaths per day. The trajectory of the epidemic is likely to remain unchanged, even with the inclusion of Wales’ infection numbers.

Yet, Sir Keir Starmer became the latest figure to call for the Government to revert to Plan B today and bring back a suite of Covid curbs.

It comes amid an escalating row about how Britain’s epidemic will unfold in the coming months and whether compulsory face masks, working from home and vaccine passports are necessary.

Independent scientists told MailOnline they expect that a combination of the booster vaccine rollout and rising natural immunity in children will lead to a ‘substantial and rapid’ fall in cases, hospitalisations and deaths in weeks.

The topic has also divided No 10’s own scientific advisory panel SAGE, with several key members publicly lobbying for more restrictions to safeguard the NHS from being overwhelmed in the coming months.

But many of the scenarios forecasted by the group’s modelling teams have daily cases plunging over the coming weeks to as low as 5,000, even if the virus is allowed to spread unchecked. The unusually optimistic modelling has given ministers the confidence to reject growing calls for them to revert to Plan B.

Stop Press: The Telegraph’s Sarah Knapton has more about the (for once) optimistic modelling in the Telegraph.