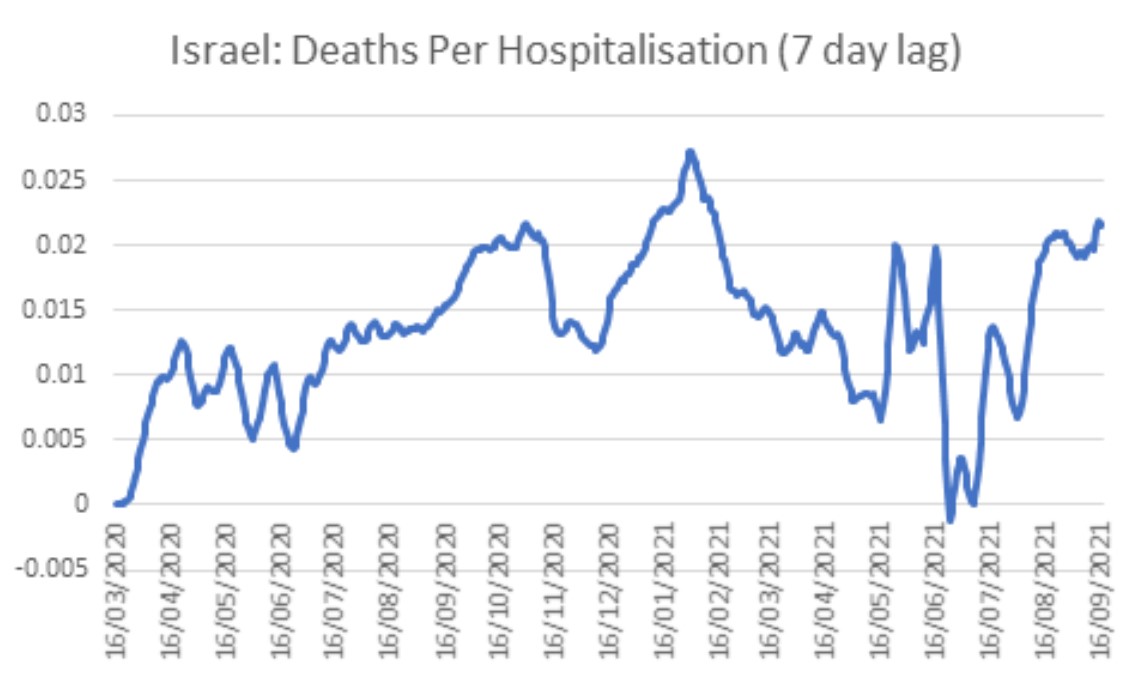 There follows a guest post by the academic economist who contributes regularly to the Daily Sceptic, who has looked in more detail at data from vaccine pioneer Israel and found indications that the vaccines are not protecting against serious disease and death as well as is generally thought.

Israel remains the gold standard when it comes to macro data for vaccine efficacy. As many know, it started its vaccine program early and its roll-out was remarkably quick. Over 60% of the population is fully vaccinated, while rates of vaccination in vulnerable groups are upwards of 90%.

It is no secret that despite these numbers, Israel is experiencing another wave of the virus. This can be seen clearly in the positive test rate data (data from Our World in Data).

We have all come to accept that the vaccines have little impact on infection – this even though we were once told it was 95% effective against infection. But no matter – be sure to throw that down the memory hole. The latest ‘mandatory science opinion’ is that the vaccine prevents cases from evolving into severe cases that require hospitalisations and, eventually, death.

Given the data in Israel we can now test this hypothesis.

Short answer: no. It has fallen relative to a 2021 spring spike (a period of low prevalence). But it is higher than it was in summer/autumn 2020. It is fair to say that there is no impact here.

Well, maybe the vaccine impact is seen in the lack of hospitalised patients being admitted to ICU? See for yourself.

On this metric we see some fall. But not much. And much of this could be put down to the better treatments now available for Covid patients. This is a more logical explanation given that these patients are already hospitalised. But regardless of your interpretation, the decline in hospitalised patients progressing to ICU is not enormous – and it appears to be rising again.

Finally, just to wrap a bow on it, what about deaths per positive test rate?

Once again, Israel is not experiencing the extremes of spring 2021 (a low prevalence period). But deaths per positive test rate are pretty much in line with where they were in 2020. No clear impact here.

Finally, let us look at deaths per hospitalisation.

Once again, Israel is experiencing deaths per hospitalisation at rates that are perfectly consistent throughout the pandemic.

Blaming the unvaccinated is absurd: with 60%+ of the population, and 90%+ of vulnerable people vaccinated we should be seeing some impact in the macro data. The fact that we are not just speaks to likely flaws in the micro data that are showing most severe cases/deaths are in the unvaccinated.

Some of this may be due to a confounding effect – i.e., vaccination status overlaps with health status (perhaps poor Hasidics are more vulnerable and are unvaccinated). But some of this is likely just due to statistical tomfoolery. As Goodhart’s Law states: “When a measure becomes a target, it ceases to be a good measure.”

Before leaving behind old Zion, it is worth utilising their data for a brief foray into more controversial territory: the dangers of the vaccine for non-vulnerable age groups. Given that Israel have been in the vaccination business for longer than most, are we seeing an uptick in excess deaths in non-vulnerable groups?

The following chart shows cumulative excess deaths as a percentage change from the average for Israelis aged 0-44 by week (from OECD).

As we can see, excess deaths amongst non-vulnerable groups were far higher in 2021 than in 2020. We can express this same data slightly differently by saying that by week 32 in 2020, the average excess deaths as a percent change from average was minus-7%, while in the same period in 2021 it was 5.3%.