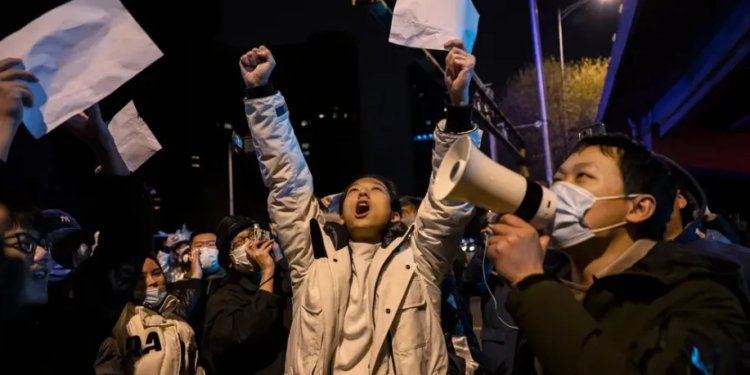 Three years ago, Zero Covid was the aspiration of public health bureaucrats and politicians across the West. Charlatan techbros like Tomas Pueyo appeared on national television to demand nationwide house arrest; leaders like Angela Merkel surrounded themselves with virus-eradicationist modellers and imposed unprecedented months-long closures upon their countries. When protests inevitably broke out, they were violently suppressed; the protesters were slandered as conspiracy theorists and fascists.

The New York Times played a leading role in this long and excruciating charade. In April 2020, it reported that “an informal coalition of influential conservative leaders and groups, some with close connections to the [Trump] White House” was responsible for “quietly working to nurture protests and apply… pressure to overturn state and local orders intended to stop the spread of the coronavirus”. In March 2021, it ran an obnoxious opinion piece about “What Happened When Germany’s Far-Right Party Railed Against Lockdowns”, which called German protesters “an amorphous mix of conspiracy theorists, shady organisations and outraged citizens” and appeared to accuse the right-populist party Alternativ für Deutschland of opportunism for joining their ranks.

What a difference a few years have made.

“China Protests Break Out as Covid Cases Surge and Lockdowns Persist” is a lead headline in Monday’s New York Times: “Strict Covid restrictions are hurting the country’s economy and angering members of the public, who are taking to the streets,” we read in the article that follows. Western anti-lockdown protesters are fascists and conspiracy theorists; Chinese anti-lockdown protesters, on the other hand, are ordinary people who are just fighting the power:

“Lift the lockdown,” the protesters screamed in a city in China’s far west. On the other side of the country, in Shanghai, demonstrators held up sheets of blank white paper, turning them into an implicit but powerful sign of defiance. One protester, who was later detained by the police, was carrying only flowers.

Over the weekend, protests against China’s strict Covid restrictions ricocheted across the country in a rare case of nationwide civil unrest. There had been signs of dissent, but the new wave of anger may pose a bigger challenge for the Government.

Some demonstrators went so far as to call for the Communist Party and its leader, Xi Jinping, to step down. Many were fed up with Mr. Xi, who in October secured a precedent-defying third term as the party’s General Secretary, and his ‘Zero-Covid’ policy, which continues to disrupt everyday life, hurt livelihoods and isolate the country.

Western lockdowns were necessary to save lives. Chinese lockdowns are the repressive tactic of an undemocratic regime.

The Chinese Government on Monday blamed “forces with ulterior motives” for linking a deadly fire in the western Xinjiang region to strict Covid measures, a key driver as the protests spread across the country.

In much the same way, in fact, as the New York Times blamed shadowy political actors with ties to Trump for anti-lockdown protests in 2020.

Outside China, the rest of the world has adapted to the virus and is near normalcy. Take soccer’s premier event, the World Cup. Thousands of people from across the globe have assembled in Qatar and are cheering on their teams, shoulder-to-shoulder, without masks, in packed stadiums.

China’s approach won praise during the beginning of the pandemic, and there is no doubt it has saved lives. But now that approach looks increasingly outdated. Almost three years after the coronavirus emerged, the contrast between China and the rest of the world couldn’t be starker.

Emphasis mine, because it’s probably the most amazing line in the whole piece. Here we have America’s foremost propaganda outlet, trying desperately to accuse China of unjust dictatorial repression, for the crime of implementing in a more organised and coherent way the very same Zero Covid policies that Times journalists spent nearly two years supporting. What’s actually wrong with the harsh Chinese lockdowns? Well, say the Times, who can’t say anything else – they’ve become unfashionable.

Times journalists have also suddenly discovered that lockdowns are bad for the economy. “China’s economy has been hurt by the restrictions,” which have “hammered business both large and small”, we read. Major companies are seeking to escape the effects of closures by “expand[ing] production outside China”, all while “reduced foot traffic” hurts businesses in “the main streets of towns and cities”. That’s horrible when it happens in China, but in Germany or Canada it’s totally worth it.

On the one hand, we should be probably be happy about the implicit repudiation of lockdowns that articles like this represent, and the strong signal they send that none of our opinion-makers wants to return to them. Some of you will have your own more detailed theories about why this is, but my broad view is that mass containment adheres to the same trajectory everywhere:

The only difference between China and the West is that a few years intervened before the first and the second of these steps.

On the other hand, the increasingly open hypocrisy and manipulation of mainstream press like the New York Times is reaching terrifying levels I’d never imagined before, and I think this is very bad.