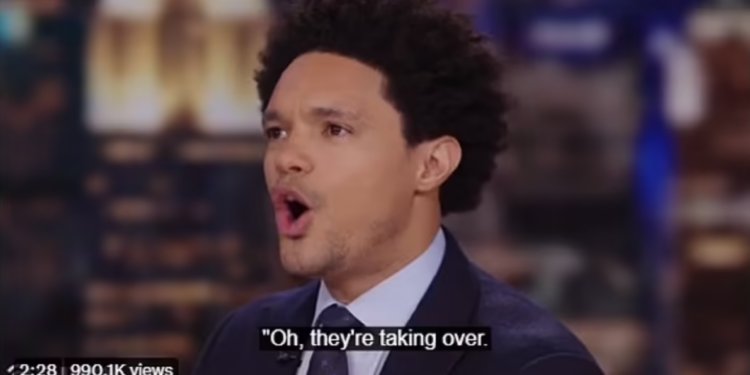 Trevor Noah has been accused of inventing a large-scale ‘racist backlash’ against Rishi Sunak, who became Britain’s first non-white Prime Minister this week. The Mail has more.

The U.S. TV host, 38, sparked fury among his British fans on Twitter after uploading a clip from the Daily Show, entitled: “Unpacking the Backlash to Rishi Sunak.”

In the three-minute video, which now has nearly a million views on Twitter, Noah claimed there were “people saying that Indians are going to take over Great Britain” as a response to Mr Sunak’s rise to the top job.

Mr Sunak is also the U.K.’s first ever Hindu Prime Minister. His grandparents migrated to the U.K. in the 1960s and they are all from India, bar his maternal grandmother, who was born in Africa, making him of British-Asian heritage.

Noah, a South African native, said “seeing the backlash” over Mr Sunak’s promotion “was one of the more telling things about how people view the role that they or their people have played in history”.

In a “Between the Scenes” segment – his interactions with the audience during the advert breaks – he then launched into a missive about postcolonial power structures and the suppression of black people and women in powerful positions.

It comes after it was revealed last month that Noah will be leaving the Daily Show after viewing figures plummeted by up to 75% following his takeover from American host Jon Stewart in 2013.

Analysts partly blamed this on the shift to online streaming but also on the programme’s perceived “political bias” and penchant for peddling “woke” ideology.

In his monologue on Mr. Sunak, Noah said: “You hear a lot of people saying: ‘Oh they’re taking over, Indians are going to take over Great Britain and what’s next?’ and I’ve always found myself going: ‘So what?… What are you afraid of?'”

“You see people in the U.K., you see people like Tucker Carlson [an American Fox News host] all the time saying: ‘You know what they’re trying to do… they won’t stop until black people and women are in positions of power’… So what?”

He added: “Why are you so afraid? I think it’s because the quiet part a lot of people don’t realise they are saying is: ‘We don’t want these people who were previously oppressed to get into power because then they may do to us what we did to them.'”

His analysis was blasted by British political commentators, who accused Noah of “projecting” America’s race problem onto Britain.

Piers Morgan fumed on Twitter: “There’s been no such backlash against Sunak, you race-baiting twerps. Why does U.S. media keep falsely portraying Britain as a racist country?'”

Meanwhile, Talk TV’s Mike Graham was more blunt, writing: You do wonder if Americans are the thickest people on the planet.”

Viewers of the show were also unimpressed, as one tweeted: “There’s been virtually no backlash to the appointment of an Indian man as PM in Britain (other than the fact the process was an undemocratic joke). But his race hasn’t been brought up in the negative by anyone. American TV and American audiences do an awful lot of projecting.”

Stop Press: Downing Street has responded to the story, saying Rishi Sunak “does not think Britain is a racist country”.

Wuhan Back in Lockdown