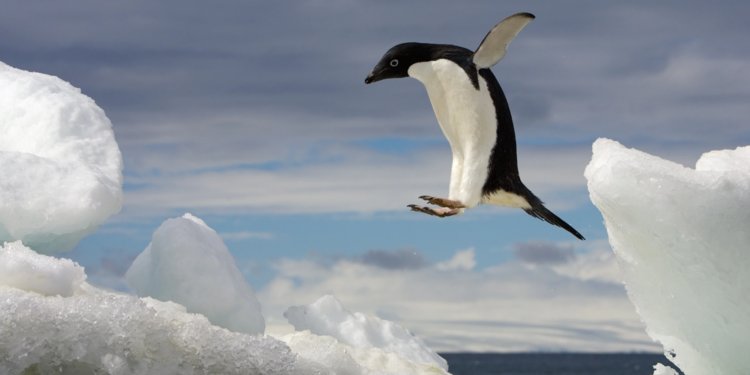 Two gulls eating a baby Adélie penguin alive as a voice over intoned that the animal was the “canary in the coalmine” for climate change. Welcome to the final episode of Frozen Planet II, narrated by Sir David Attenborough – and welcome to the day the much-loved wildlife show, long on life support, finally died, to be replaced by World Economic Forum ‘Great Reset’ green agitprop.

A tearful ecologist, Dr. Bill Fraser, told viewers that four decades ago there were 20,000 Adélie adults on an island in western Antarctica. Now, he said, there are just 400 breeding pairs left; the Adélie penguins are an “indicative species” of climate change, he said. But for some inexplicable reason, neither he nor Attenborough found it relevant to note that, in 2018, satellites had found a new colony of Adélies in a remote part of eastern Antarctica numbering over 1.5 million birds.

According to a report in the New York Times, the Adélies are not recent migrants to their Danger Islands home in eastern Antarctica. Photos taken in 1957 by a seaplane are said to have shown colony boundaries in virtually the same locations. “We are standing here looking at climate change killing off these Adélie penguins,” intoned Fraser. Presumably he would have had to adjust the ‘climate change’ remark if he was fortunate to find himself knee-deep in the little beasties over on the eastern side of the continent.

But all the animals more or less left the Frozen Planet II stage in the final episode, shown last Sunday on BBC One, as Attenborough ran through almost every ice scare in the alarmist book. He said humanity must stick to 1.5°C of warming agreed at COP26, “no matter how challenging it may be”. Stopping the climate, a non-linear system of which we have incomplete and, in parts, negligible information is a ridiculous ask. But Attenborough pronounced: “We can do it, we must do it. Then there will be a future for the planet.”

The programme started with Attenborough’s familiar claim that the ice caps are melting “faster than ever before”. Of course, Attenborough cannot actually know this. For one, the timeline is somewhat imprecise. But as we have seen in numerous Daily Sceptic articles, ice is highly cyclical. Two American glaciologists Laura Larocca and Yarrow Axford recently found that over half of the Arctic’s glaciers and ice caps that exist today, did not exist or were smaller 10,000 to 3,400 years ago. At the time, atmospheric carbon dioxide ranged between 260 to 270 parts per million, compared with the current 410 ppm, so its hard to see how carbon dioxide played a role in making them smaller. The scientists noted that the Arctic’s modern ice extent is “among the largest of the last 10,000 years”.

In episode 2, Attenborough made the incredible claim that all the summer sea ice in the Arctic could be gone by 2035. His claim seems to have been taken from the prediction of a climate model in a 2020 paper written by a group of academics working with the Met Office’s Hadley Centre. But plans for any boating around the North Pole might have to be put on hold. At this year’s September Arctic summer end, the U.S.-based National Snow and Ice Data Center reported that the ice extent was 4.87 million square kilometres, which was 1.54 million sq kms higher than the low point in 2012. Gradual recovery has been evident since the 2012 low point, and this year was the 11th lowest extent in the recent satellite record.

Detachable ice sheets and biblical levels of flooding are old favourites. “Calculations predict nearly half a billion people living in coastal communities around the world will be displaced by flooding by the end of the century,” warned Attenborough. “If the Greenland ice sheet slips into the ocean more rapidly, this flooding could all happen far sooner,” he added. It was likely that Attenborough was citing flood work by computational scientists working at Climate Central, who predicted similar figures in 2019. Under “high emissions” of carbon, models indicate 630 million people live in land below projected annual flood levels for 2100. “High emissions” pathways are often used by catastrophists since they assume global temperatures will rise around 3-4°C this century. Since global temperatures have spent the first two decades of the century plateauing, there would appear to be some way to go.

In 2019 Attenborough narrated a joint World Wildlife Fund-Netflix collaboration featuring walruses falling off a cliff in an episode of Our Planet. Attenborough attributed the horrific scenes on the Russian Arctic Chukchi Sea coast  to “climate change”, despite a pack of nearby polar bears providing a more obvious explanation. Introducing his film to the rich and influential elites gathered at the World Economic Forum in Davos that year, Attenborough commented: “If people can truly understand what is at stake, I believe they will give permission to business and governments to get on with practical solutions.” Subsequently, the polar bear expert Dr. Susan Crockford wrote a book about the affair entitled, Fallen Icon: Sir David Attenborough and the Walrus Deception.

In Frozen Planet II, groups of plump bears are shown wandering  around in large packs on Wrangel Island in the Russian Arctic. Without sea ice, the bears cannot hunt seals it was said, and they find other food including human food supplies. In fact the film shows the bears feasting on a walrus, of which there are thought to be around 100,000 on the island at certain times of the year.

Crockford notes that it is possible to refute the implied narrative of a struggle for survival brought about by human-caused climate change resulting in a sea ice death spiral. In fact Chukchi Sea polar bears are “unexpectedly thriving“, she reports. Sea ice along the coast of Chukotka and Wrangel was “very thick” last summer, and at September 1st this year Wrangel was still surrounded by ice. Although sea ice has recently declined, she goes on to report that more sunlight reaching the open water for longer periods has meant more food for the entire Arctic food chain. More food for fish and seals has meant more food for polar bears in the spring (when the ice is still abundant) and fatter bears means more healthy cubs, she says.

In Crockford’s view, this latest series is “deliberate emotional manipulation” meant to make viewers amenable to taking action on climate change. She is right, of course. The six-part series is primarily a political stunt designed to secure acceptance for the drastic lifestyle and economic changes that will be forced on populations through a command-and-control Net Zero agenda. Little attempt is made to explain that the climate has always changed, sometimes very rapidly, and that natural forces, many of them little understood, are at work. Instead we are led to believe that humans, a latecomer on Planet Earth, have the power to actually stop the climate. Cherry-picking of data is rife – the Adélies penguin story  is an obvious example. Many claims are anecdotal and highly emotional, and don’t stand up to rigorous scientific scrutiny. As Crockford noted, the people involved are not about to let scientific facts get in the way. “This is calculated ‘climate change’ propaganda marketed as entertainment.”

Will the ‘Virus Sceptics’ Ever Accept the Evidence That Proves Them Wrong?

“Until Proven Otherwise, it is Likely Covid mRNA Vaccines Played a Significant Role in All Unexplained Heart Attacks Since 2021” – Renowned Cardiologist