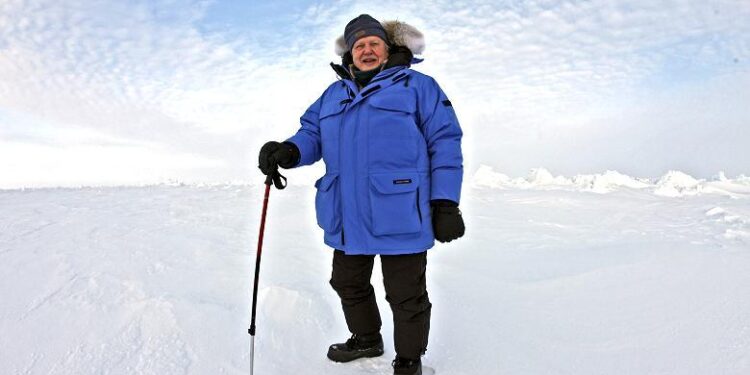 The Arctic has been a happy hunting ground for the climate scaremonger Sir David Attenborough. Two years ago he made the fanciful claim that polar bears could die out in the 2030s. It is now generally accepted that polar bears have been thriving and increasing in numbers, and in his latest BBC documentary Frozen Planet II, Attenborough makes no mention of his previous claim. But he does make the astonishing suggestion that all the summer sea ice in the Arctic could be gone within 12 years.

Unfortunately, such predictions are now out of date. Summer sea ice hit a low in 2012 and has been steadily recovering ever since. According to the latest data from the US-based National Snow and Ice Data Center (NSIDC) for the end August, “Sea ice extent is likely to remain higher than in recent years.” The evidence is shown in the graph below.

As can be clearly seen, the 2022 blue line is well above the 2012 low point. According to the NSIDC, average sea ice extent for August ranked 13th lowest in the recent satellite record. The growth of Arctic sea ice has been confirmed by a number of sources. The EU weather service Copernicus reported that the coverage of Arctic sea ice is now very close to the 1991-2020 average.

Attenborough’s script may well have been written for him some time before this latest data started to cast real doubt on further Arctic sea ice decline, at least in the short term. His claim that it could all suddenly vanish seems have been taken from a paper written in 2020 by a group of academics working with the Met Office’s Hadley Centre. As with all climate forecasts, the claim is the product of a computer model. It is said that the latest model – HadGEM3 – simulates a more accurate interglacial climate. This seem to have led the academics to think they can now confidently predict all the summer sea ice in the Arctic will disappear within 12 years.

Lead author Dr. Maria-Vittoria Guarino explains: “The advances made in climate modelling means that we can create a more accurate simulation of the Earth’s past climate, which, in turn, gives us greater confidence in model predictions for the future.”

Climate models suffer from at least one big flaw. Despite decades of research, scientists are no nearer discovering how much temperatures will rise if carbon dioxide in the atmosphere is doubled. The current range is from around 0.5°C to 6°C. Climate models mostly land on the higher range, one of the reasons they haven’t produced an accurate forecast of future temperature for more than 40 years. In the absence of building in an accurate assumption about this important temperature/gas relationship, climate models and their predictions must always be treated with extreme caution. The World Climate Declaration, signed by around 250 professors including a Nobel physics laureate, noted that models had many shortcomings “and are not remotely plausible as global policy tools”.

Attenborough also repeated the claim that the Greenland ice sheet is melting six times faster than 30 years ago. To back up this scare, extensive footage was shown of running water and ice shelving from the main sheet. All of these events of course would occur naturally, especially in the summer months. As we recently reported, the U.S. meteorologist Anthony Watts pointed out that when recent actual Greenland ice loss is compared to the full ice sheet, the loss is so small “it is almost undetectable”. Recent claims of alarming rises in sea levels were said to be “just modelled hokum”. The claim that Greenland is melting six times faster than before is often repeated, but Watts noted that 30 years ago the ice sheet was barely melting. “Six times almost no ice loss is hardly an example of a climate change crisis,” he said.

At the start of his programme, Attenborough stood God-like looking down on Planet Earth. By the end he was intoning that animals needed one thing more than any other, and that was for the planet to stop warming. It was up to humans to make that happen, he said. Such a wish seems to be a denial of natural climate change – and the assumption of more divine powers than humans actually possess! What temperature or level of CO2 would Attenborough and his ilk like? Indeed, what is the correct temperature of the Earth? Records going back 600 million years give us no guidance since temperatures have often been much hotter and much colder, while CO2 has been 15 times higher than it is now. As the late Professor Bob Carter noted, a warmer or cooler planet than today’s is far from unusual: “Nature recognises nothing ‘ideal’ about mid-20th century temperatures.”